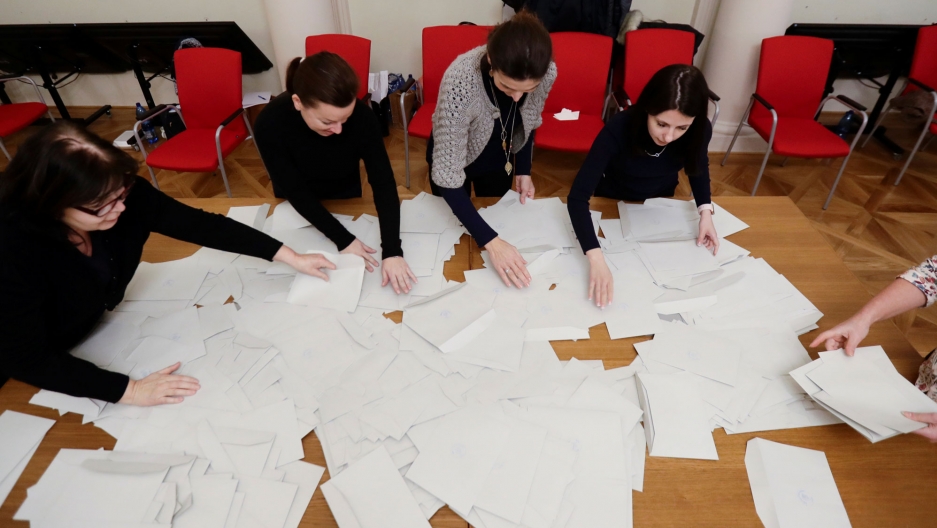 Election committee members are seen as they count votes after polling stations closed for the country's direct presidential election in Prague in the Czech Republic on Jan. 13, 2018.

Czech President Milos Zeman appeared Saturday to be heading for a run-off as polls closed in a presidential election pitting the pro-Russian incumbent against a flock of more liberal pro-European rivals.

Opinion surveys show the divisive 73-year-old ex-communist, who is also staunchly anti-Muslim and pro-China, leading the pack of nine candidates ahead of Jiri Drahos, 68-year-old pro-European former head of the Czech Academy of Sciences.

Although Zeman was in pole position Saturday, the outspoken head of state was unlikely to win an outright majority, with a run-off expected on Jan. 26-27.

But a recent poll for Czech Television showed the tide could still turn, with a possible win for Drahos with 48.5 percent of votes predicted for the second round against 44 percent for Zeman.

The CTK news agency pegged turnout at 60 percent in round one, similar to the last presidential ballot in 2013.

As he voted in Prague on Friday, Zeman was targeted by a bare-breasted anti-Kremlin protester who called him "Putin's slut", referring to Russia's president.

Ironically, experts say the move might boost Zeman's chances, judging by an outpouring of sympathy for him on social media.

Headlines like "Attack on Zeman" and "A scandalous incident" were splashed across the front pages of Saturday newspapers.

The topless activist from Ukraine's Femen group was overpowered by bodyguards and then arrested by police.

Security personnel also had to help a visibly rattled Zeman, who walks with a cane, to leave the room.

He is also stridently anti-Muslim, having once called the 2015 migrant crisis "an organized invasion" of Europe and insisted Muslims were "impossible to integrate".

The country of 10.6 million people has received only 12 migrants under the EU quota system.

Drahos could not be more different. A mild-mannered liberal centrist whom critics have dubbed "wishy-washy", he has called for Prague to "play a more active role in the EU" and has backed the adoption of the euro.

After voting in Prague on Friday, Drahos said the future president "should work in the interest of the pro-Western orientation of the Czech Republic" in a clear dig at Zeman.

"The president should work to unite society. It's clear that not everyone can agree, but the current president doesn't unite people, he divides them," Drahos added.

After casting his ballot in Prague, Lubos Seidl said the election boiled down to "a clash between the people who think the old way and those who think the new way."

Many voters remained undecided until the last minute, with Prague archivist Marcela Riegerova saying she "ended up tossing a coin to decide between two candidates, and Drahos came out the winner."

"It is a clash between... the post-communist part of society represented by Zeman and the other part, say, modern, pro-Western, which simply doesn't want this president anymore," he told AFP.

Zeman has the backing of embattled billionaire Prime Minister Andrej Babis, who said the incumbent "fights for our national interests" but called on him to "unite, not divide" Czechs.

Tapped by Zeman for prime minister in December, Babis was forced to form a minority government which appears set to lose a parliamentary confidence vote on January 16.

Pehe said a victory for Zeman might "pave the way for a deeper alliance with Andrej Babis, which could lead to a change in some basic parameters of liberal democracy in the country."

But things could change dramatically if Drahos wins.

"Drahos has made it very clear that a prosecuted man should not be prime minister," Pehe said.