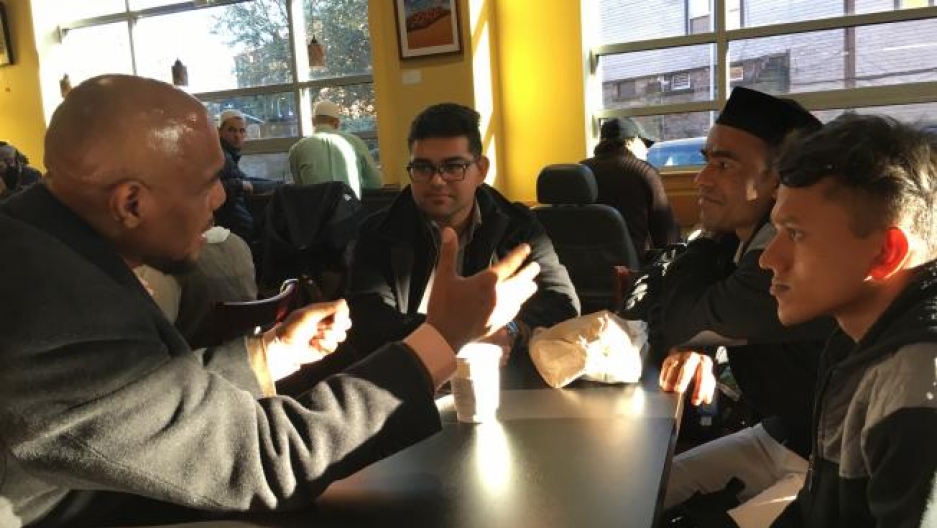 (From right) Muhammad Anwar and Hussein Muhammad (wearing a hat) chat with Ibrahim Rashid, an intern with IINE (center), and a community member.
Credit:

It was a feeling Hussein Muhammad had waited years to feel.

Ten days after arriving in Boston, he fought the bitter cold to arrive at the Islamic Society of Boston Cultural Center. When Friday afternoon prayers finished, he said he felt “very good.”
Muhammad was with his good friend Muhammad Anwar. The two men are Rohingya, and they met while fleeing Myanmar several years ago. Now, they’re refugees and housemates in Dorchester.
Over the past six months, more than half a million Rohingya people have escaped Myanmar into neighboring Bangladesh. A Muslim minority in the predominantly Buddhist country, the Rohingya have faced decades of persecution that has recently ramped up. The Burmese government has faced worldwide condemnation, and the Rohingya are now considered one of the fastest growing refugee populations in the world.
Muhammad and Anwar's first day in Boston was one brimming with logistics: buying a cell phone, signing up for benefits, unpacking their bags. When asked about their plans in the US, they said they had two immediate goals: learn English and find a mosque.
Accompanied by an intern from their resettlement agency, they found the mosque after momentarily taking the train in the wrong direction. Arriving moments before Friday afternoon prayer started, both Muhammad and Anwar were focused. They hurried to finish their ablutions as the call to prayer rang out.
As prayers wrapped up, the Center’s director called them to the front of the room.
“This is brother Hussein and brother Muhammad,” he said. “I really pray that our community can take care of them and that we can really get to know them well. Get to know their stories, inshallah, [and] through them also help our Rohingya brothers and sisters.”
As the crowd of more than a thousand dispersed, a group grew around Muhammad and Anwar.
Community members wanted to know if they had enough warm clothes. Some slipped them cash. Others asked about their families. Hussein Muhammad talked of his three young children — two boys and one girl — in a refugee camp in Bangladesh.
As they sat down to eat in the mosque cafeteria, Muhammad and Anwar were beaming. After years of persecution for their religion, it was this sense of religious freedom they’d been craving.
They stayed and talked with community members straight from afternoon to evening prayers. And they said they’ve braved Boston’s bus systems to return to the mosque each Friday.
On the other weekdays, “I do English,” Muhammad said, “Monday, Thursday, Wednesday, Tuesday. One week, four days.”
Muhammad and Anwar take English class at the agency that’s resettled them, the International Institute of New England. Their class has about thirty adults from all over the world.
On one chilly morning, they’re learning the names of different types of clothing — vests, boots, coats — and they’re learning how to read an analog clock.
Hussein Muhammad is particularly good at telling time. He explains to the man sitting beside him, a gentleman from Haiti, that the short hand on the clock indicated the hour and the longer hand tells the minutes. And when the hour hand is in between two numbers, you must say the number that precedes it, and not whichever number is closest.
Prayer and study during the week leave the weekend unscheduled. So, what do they do? Anwar answered without hesitation, “homework, study English, reading [a] book.” Exactly what book are they reading? The dictionary. They went out and bought it last week.
With the Quran in one hand and the dictionary in the other, both Muhammad and Anwar are well on their way to accomplishing their first two goals. They said their next two goals are obvious: find a job — any job — and find a way to bring their families to America.
A version of this story originally appeared on WGBH.