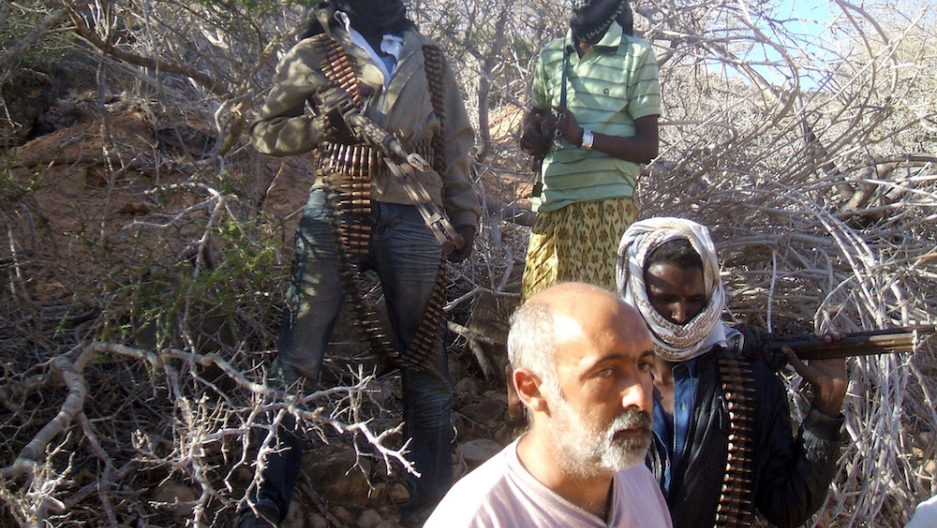 Juan Alfonso Rey Echeverry (bottom), captain of Mozambican-flagged fishing vessel VEGA 5, is guarded by suspected masked pirates between Haradere and Hobyo in this undated photograph released to Reuters on April 25, 2011. Echeverry was among 24 crew members of the fishing vessel which was seized by Somali pirates on December 31, 2010 in the Indian Ocean, about 200 miles southwest of the Comoros.

Pirate attacks worldwide fell to their lowest level in over two decades last year, the International Maritime Bureau said, but more than doubled in the Philippines while African trouble spots remained dangerous.

A total of 180 incidents of piracy and armed robbery against ships were recorded last year, the lowest number since 1995 and down from 191 in 2016, the bureau said in its annual report.

Some countries such as Indonesia, the world's biggest archipelago nation, saw a drop in incidents, with 43 attacks in its waters last year, down more than half in the past two years.

However a handful of countries witnessed a steady climb in attacks.

Twenty-two incidents were recorded in the Philippines, a jump from 10 in 2016, with most of them low-level attacks on vessels anchored at Manila and Batangas, south of the capital, the country's two busiest ports.

There were also kidnappings of crew in the southern Philippines, the bureau said. Islamic militants have been increasingly targeting seafarers in the strife-torn region, abducting them and demanding ransoms for their release.

The number of attacks in Bangladesh jumped three-fold to 11 in 2017, with most in Chittagong, the country's busiest port.

The Gulf of Guinea off the west coast of Africa remained an attack hotspot in 2017. Out of 16 incidents of vessels being fired on reported worldwide last year, seven occurred in the gulf.

There were 10 incidents of kidnapping involving 65 crew members in or around waters off Nigeria, which lies next to the Gulf of Guinea, according to the Kuala Lumpur-based IMB's report, which was released Wednesday.

Waters off Somalia remained dangerous, with nine incidents recorded last year, up from two in 2016.

A dramatic attack on a container ship far off the Somali coast saw pirates firing rockets at the vessel after a failed attempt to board it.

"This dramatic incident... demonstrates that Somali pirates retain the capability and intent to launch attacks against merchant vessels hundreds of miles from their coastline," said IMB director Pottengal Mukundan.