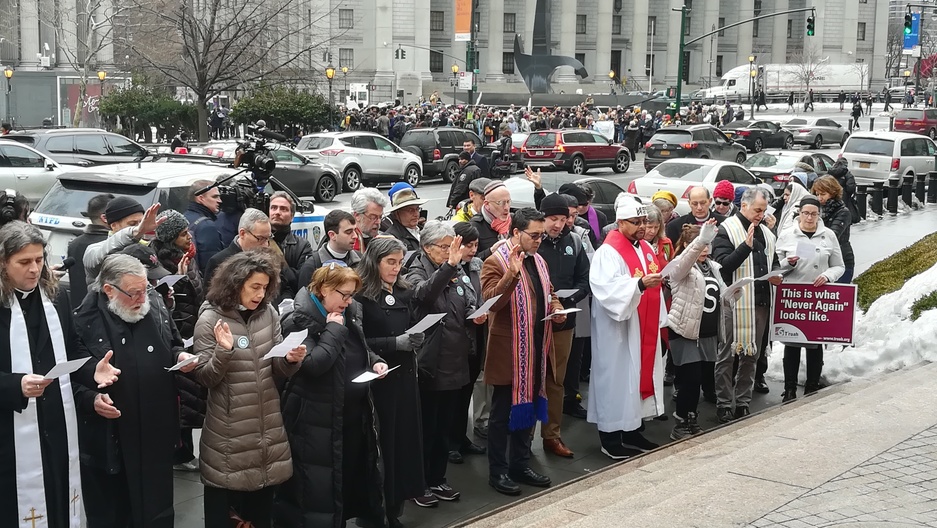 A group of supporters gathered outside 26 Federal Plaza in New York City on Thursday, Jan. 11, 2018 while prominent immigrant advocate Ravi Ragbir had a check-in with immigration agents. Ragbir was detained and 18 people were arrested in a protest that ensued.

Under a cloudy sky, Ravi Ragbir quietly reported for his scheduled check-in with immigration authorities at 26 Federal Plaza in lower Manhattan on Thursday morning. It is the same office where he has attended each of his routine meetings for years.

Today, though, Ragbir didn’t walk out.

What happened confirmed Ragbir’s worst fears: That immigration policy changes made by the Trump administration would put him on a path to deportation. He is a longtime immigrant advocate and leads the New Sanctuary Coalition of New York City. His supporters, many of whom gathered at nearby Foley Square, were stunned when they heard the outcome, which spread quickly through social media.

Earlier this month, Jean Montrevil, a Haitian immigrant and founding member of the New Sanctuary Coalition, was taken into custody by immigration agents in front of his home. As in Ragbir’s case, immigration authorities had for years allowed Montrevil to continue to live and work in the US while he was trying to clear a challenge to his immigration status related to a decades-old conviction for selling drugs.

Still, Ragbir remained hopeful his case might turn out differently. Like Montrevil, he came to the US as a legal permanent resident, with a green card. In his case, he was convicted of wire fraud in 2001 after the mortgage company that he worked for was investigated for fraudulent loan applications. He served a five-year jail sentence, then spent two years in immigration detention while he was in deportation proceedings. His lawyer argues that he might be able to vacate the conviction and then reinstate his green card.

ICE has prosecutorial discretion, the power to make case-by-case decisions about who gets to stay and who has to go. It’s how Ragbir has stayed in the country since 2006, despite a removal order against him. In the Trump administration though, the way that discretion is exercised has changed.

“I’m still going in, there’s no question about it,” he said during a brief interview at his office at Judson Memorial Church a few days before this most recent check-in. “It always comes down to the hope that they will not detain me, and they will not deport me.”

Ragbir’s lawyer submitted a request for what is called a stay of removal, basically a hold on his removal order, while his legal case is pending. Today, they hoped ICE would approve that request and also give news about an application to reopen his deportation case.

News spread rapidly to his supporters that things were not going the way they hoped. Alina Das, Ragbir’s lawyer who was present at the check-in, told a group gathered in the cafeteria of the federal building that ICE had not given an update about his deportation case and that “at this time” they were going “to enforce the order.”

Das says they were at first uncertain about what those words meant, but then the immigration agent handed her the denial of Ragbir’s stay of removal application signed by Thomas Decker, the ICE field office director in New York. Agents said they received the denial Thursday morning, and were taking Ragbir into custody.

“[They] just kept saying it was the end of the road for him,” says Das, who has been representing Ragbir since 2008. The news was a shock to her and to Ragbir. “His eyes rolled to the back of his head. He passed out.”

Amy Gottlieb, Ragbir’s wife, also started to feel unwell. Soon, medical help arrived. Ragbir’s blood pressure was dangerously low and he was taken to nearby New York Presbyterian-Lower Manhattan Hospital. By then, he was also officially in ICE custody. 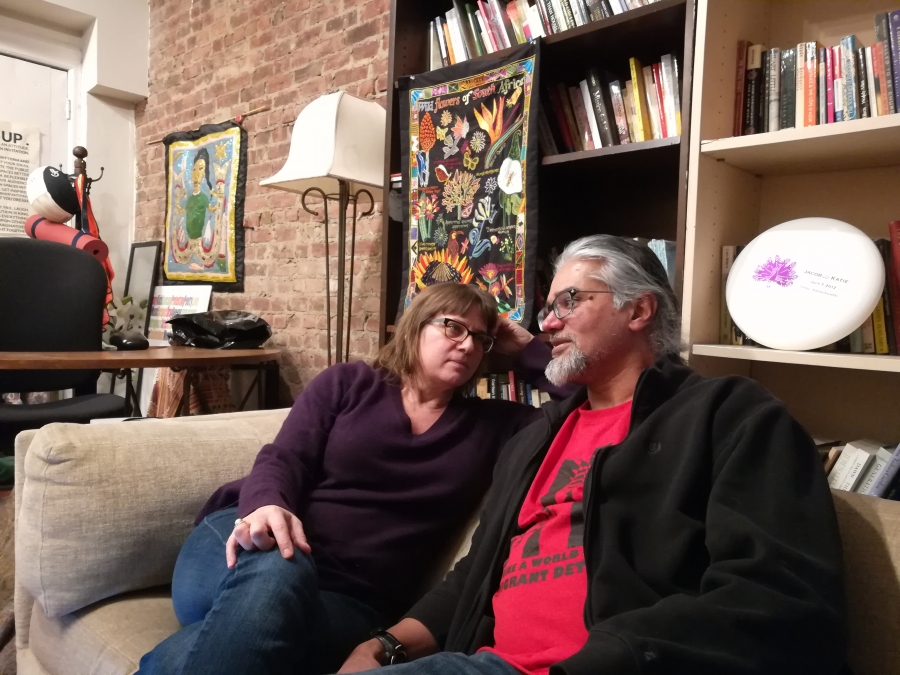 Ravi Ragbir sits with his wife, Amy Gottlieb, after a meeting at Judson Memorial Church, in lower Manhattan. They met with their lawyer and supporters three days before Ragbir's check-in with immigration agents on Jan 11, 2018.

As of yet, there is no news about where Ragbir will be detained pending deportation.

“Over the last 12 years, Mr. Ragbir’s immigration case has undergone extensive judicial review at multiple levels of the nation’s judicial system, including both immigration courts and federal appeals courts. In each review, the courts have uniformly held that Mr. Ragbir does not have a legal basis to remain in the US,” she wrote in an email. “He has since exhausted his petitions and appeals through the immigration courts, the Board of Immigration Appeals and the US District Court. He will remain in custody pending removal to Trinidad.”

A legal challenge to vacate the original criminal conviction, which triggered Ragbir’s immigration troubles, however, is currently pending in federal court. Ragbir has not been in Trinidad since he arrived in the US in 1994.

As an advocate, Ragbir is known for his unyielding belief in staying visible and not living in the shadows. He has organized groups to accompany immigrants to their appointments with ICE in New York City for years. This time, Ragbir went to his own check-in with his wife, lawyer, family members and friends. State Sen. Gustavo Rivera and New York City Councilmembers Jumaane Williams and Ydanis Rodriguez were also with him. Both Williams and Rodriguez, along with 16 others, were arrested while attempting to stop Ragbir’s removal from 26 Federal Plaza by blocking the ambulance that was transporting him. Protesters say they thought the ambulance was taking Ragbir to an immigration detention center.

Rep. Joe Crowley, a Democrat from New York, has called for Ragbir’s release.

“Ravi is an acclaimed community leader, a loving father, and a steadfast immigrant rights activist,” he said in a statement. “His detention is entirely unwarranted and reflects the Trump administration’s predatory behavior in New York City and across the country. Ravi must be released immediately.”

The New York Sanctuary Coalition and other immigrants rights organizations organized a vigil near the immigration court at Varick Street at 5:00 pm ET on Thursday.