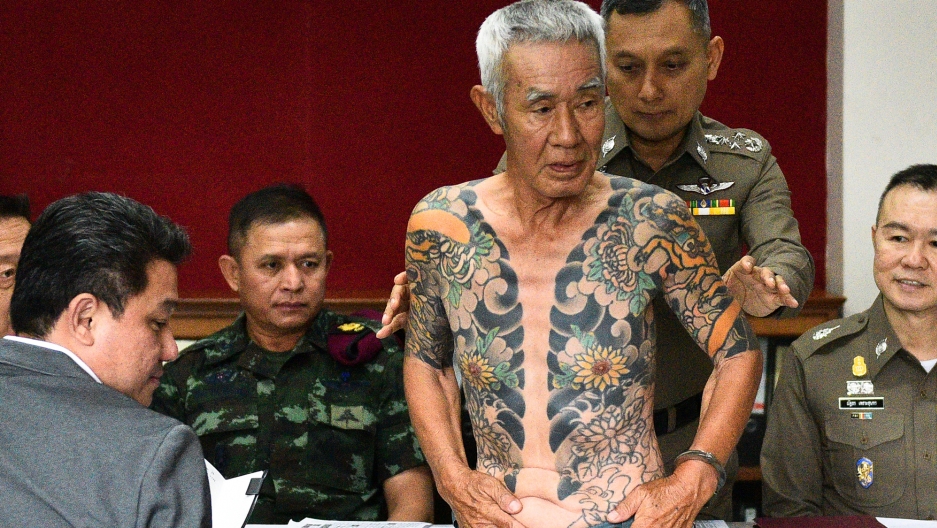 Shigeharu Shirai (C), a 74-year-old Japanese man accused of a gang murder in Japan 15 years ago attends a news conference at a police station, after being detained by police in Lopburi province, Thailand, Jan. 11, 2018.

A retired Japanese crime boss has been arrested in Thailand ending more than 14 years on the run after photos of his 'yakuza' tattoos and a missing little finger went viral.

The fugitive, Shigeharu Shirai, 72, was arrested by a SWAT team on Wednesday in the sleepy central Thai market town of Lopburi while he was out shopping.

Japanese authorities have called for his arrest over an alleged role in the shooting of a rival in Japan in 2003, after which he fled to Thailand, married a Thai woman and drifted into a seemingly peaceful retirement.

That was until a Thai local posted some photos of the diminutive, frail-looking retiree playing a streetside checkers game with his intricate gang tattoos on full show and a missing little finger — yakuza members often slice off the tip of a finger to atone for an offense.

The photos were shared more than 10,000 times online and caught the attention of Japanese police, who asked the Thai authorities to move in.

"The suspect admitted that he was the leader of the Yakuza sub-gang Kodokai," Thai police spokesman General Wirachai Songmetta said, referring to an affiliate of Japan's largest yakuza gang, the Yamaguchi-gumi.

The yakuza emerged in the chaos of post-war Japan turning into multi-billion-dollar criminal organizations involved in everything from gambling, drugs and prostitution to loan sharking, protection rackets and white-collar crime.

They were long tolerated as a necessary evil to keep order on the streets and getting things done quickly — however dubious the means.

Unlike the Italian Mafia or Chinese triads, yakuza are not illegal and each group has its own headquarters in full view of police.

Shigeharu Shirai stands accused of shooting dead the boss of a rival faction for which seven other members of his gang were caught and imprisoned for between 12 and 17 years.

"The suspect has not confessed to murder but has admitted that the victim used to bully him," the Thai police spokesman added.

The mobster boss kept a "low profile" during his stay in Thailand, police said, receiving money two or three times each year from a visiting Japanese man.

With no passport or visa, he was officially arrested for entering Thailand illegally and could be extradited to face prosecution in Japan as early as Friday.

Around 70,000 Japanese live in Thailand and Japan is the country's biggest investor, largely in the automobile and electronics sectors.

In 2017, Japanese spent more than $4 billion in Thailand, nearly half of all foreign direct investment.