Through water-conservation strategies, PepsiCo is now saving $1.5 million annually at its Gatorade processing facility in Tolleson, Arizona and using 24 percent less water in the water-scarce state.

Here’s a sobering thought: “Studies have shown that as we look out to 2030, global demand for water is expected to outstrip supply by 40 percent,” says Brooke Barton with CERES, a Boston-based non-profit that helps businesses build sustainability into their work, including water conservation.

Right now, that’s a challenge that’s just not on the radar of a lot of companies.

“It’s surprising how many companies and manufacturing facilities around the world aren’t even measuring how much water they use,” Barton says, especially given that population growth and climate change are putting unprecedented pressure on freshwater resources.

CERES is trying to change this dynamic by tracking food companies’ progress using less water and by appealing to their self-interest — monitoring and cutting water use can save corporations lot of money.

Barton says that message is getting through.

“What we’re seeing [is] a growing cadre of companies who are shifting direction and elevating this as a priority in their business,” says Barton, who highlighted Levi's and PepsiCo as two examples of emerging corporate leaders in water conservation.

PepsiCo produces many types of beverages — including Gatorade — as well as several kinds of chips like Cheetos, Ruffles and Tostitos.

At a massive Gatorade facility in the city of Tolleson, Arizona, which is just outside of Phoenix, bottling lines fill up 600 containers per minute.

Carey says the company started investing in water efficiency four years ago in water-scarce Arizona. Since then, they’ve seen a 24 percent improvement at the facility.

“That’s about a hundred million gallons of water every year that we do not use this year,” says Carey.

That translates into $1.5 million saved annually, music to the ears of Carey’s corporate bosses.

So, how did Pepsi do it? It starts with cleaning all those empty bottles. Water is out, air is in. Pulses of air remove dust particles from sterilized bottles.

“Think of it the way you would think of an air pressure device at a service station when you’re filling your tires,” Carey says.

Another water-saving step: more efficient filtering of the water used in Gatorade.

“Originally we would just do a single pass through, reverse osmosis," Carey says. "We’d use the clean water in our operation and the rest would go to drain.”

That water is now recaptured and cleaned again. Previously, Pepsi recovered 80 percent of the water here. Now they recover 87 percent.

Pepsi’s next trick can be found on the rooftop. Carey opens a hatch and emerges into the bright Arizona sun. “On top of this roof we have a field of solar panels that covers about 700,000 square feet,” says Carey.

But just what do solar panels have to do with saving water? It goes back to the local utility — power plants use tremendous amounts of water to generate electricity, boiling water to create steam or using water as a coolant. The less power Pepsi draws from the grid, the less water is used at the power plant.

“And because we’re all in the same watershed, we’re saving water in Arizona, in the watershed that supplies us,” Carey says.

That, in turn, helps maintain the long-term viability of Pepsi’s operations in Tolleson. Pepsi is also working with The Nature Conservancy in Arizona and elsewhere, experimenting with ways to replenish local watersheds.

But remember: manufacturing is but one part of Pepsi's process, which requires huge quantities of water. Water is used every step of the way, from transportation to agriculture. The crops for Pepsi’s foods and beverages — from potatoes to sugar — account for a lot of Pepsi's water usage (agriculture uses the vast majority of the world's fresh water). PepsiCo is working with farmers worldwide to improve crop yields and improve environmental practices, but reaching company goals is still very much a work in progress.

Back to its manufacturing, PepsiCo has set a goal to reduce its water use an additional 25 percent by the year 2025, with the year 2015 as a baseline, at all its food and beverage facilities worldwide. The company is also working to replenish 100 percent of the water it consumes, by the year 2025, in manufacturing operations in high-risk water areas.

Pepsi may be leading the way, but what they’re doing isn’t exactly splitting the atom. So why are corporations, like PepsiCo, just making these changes now? Why weren’t these things done 25 years ago?

Carey says water has long been cheap and CEOs just didn’t think about sustainability as a business advantage.

“People didn’t say, ‘Oh what can I do to save water?’" he says. “They probably did what I call ‘the gross stuff.’ They did the big water savings projects, which were fairly obvious. We’re at the precision scale now where we say, 'How can we tune our operations? How can we buy equipment and make it operate just perfectly?'”

Consider Levi's, where water is a main ingredient in blue jeans.

The lab is a miniature factory at the forefront of jeans technology. Hundreds of pairs of prototypes are stacked along the walls.

“Each jean has a recipe,” he says. “It’s very similar to cooking.” 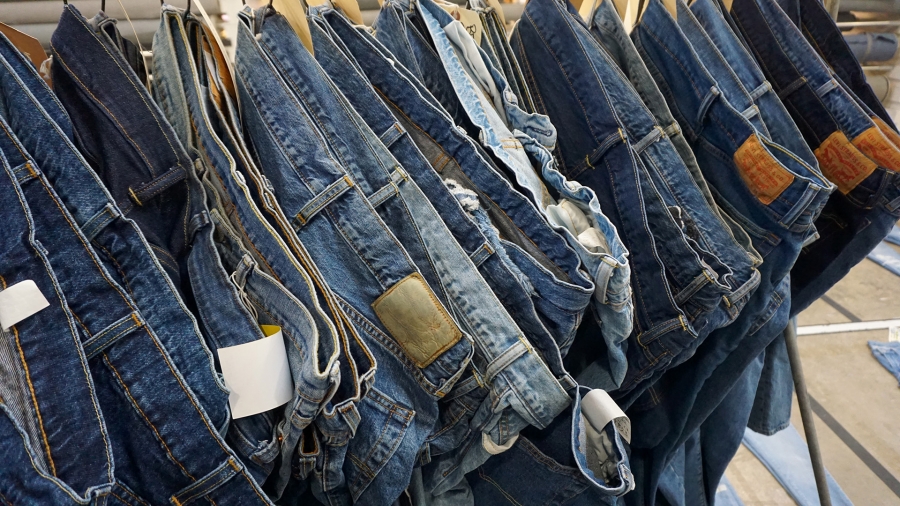 At Levi’s Eureka lab near downtown San Francisco, the company is experimenting with waterless techniques for washing blue jeans.

Jeans all start out with the same basic ingredient: dark denim fabric.

“Up until 40 years or so ago, jeans were sold like this,” Sights says. “They were stiff and scratchy.”

Today, consumers choose from a huge variety: light, dark, faded, pre-shrunk, stone-washed. And those variations are created with water.

The lab has several rows of washing machines, but at a full-scale Levi’s factory, the machines wash 300 pairs of jeans each. To get the right color and softness, some jeans are washed over and over, which uses a lot of water.

So a few years ago, the company created machines that use ozone gas instead.

“It reduces the color from something dark to something light without using very much water at all,” he says.

Levi’s has developed about a dozen other waterless techniques with the goal to use them in 80 percent of its products by 2020. That means rolling them out to factories around the world, from Egypt to Mexico.

The company hasn’t quantified how much water it plans to save but so far, said it has saved more than 200 million gallons.

“To use less water is usually less expensive,” Sights says. “Especially in some areas where we produce, water is a challenge, water is a premium.”

Of course, most of the water used for jeans comes from growing the cotton itself, which is a notoriously thirsty crop. Levi’s doesn’t grow it, but they’re working on ways to cut that water demand too, including sourcing some of their fabric from the Better Cotton Initiative, which works with farmers to reduce water use.

Then there’s all the water that jeans use after we buy them, which makes up about one-quarter of their total water footprint. Levi’s has found that Americans use more water to wash our jeans than consumers in Europe or China.

Among hard-core lovers of 501s, there is a movement to never wash your jeans, to develop a personalized patina.

“True connoisseurs and aficionados, it’s the ultimate form of self-expression for people,” Sights says. “I never wash my jeans. Ever.”

But for everyone else, there is an easier option.

“If we could just convince people in America to wash their jeans only every five times they wear them, that would move the needle,” he says.

Brooke Barton with CERES is optimistic that the trends at Levi's and PepsiCo will catch on and transform how businesses approach water usage.

“Traditionally, corporations have viewed water as an abundant, cheap, limitless input and that’s rapidly changing,” Barton says. “There is a strong competitive dynamic when it comes to water-resource management. And we are seeing that as certain companies — whether it's PepsiCo or Coca-Cola — are increasing their investments in their water efficiency, others in their sector are following.”