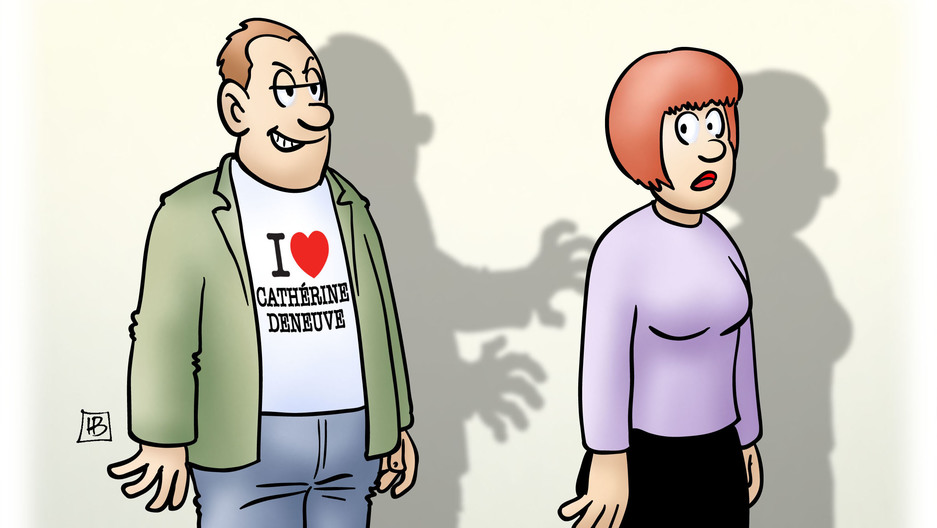 A letter signed by 100 French women — including film star Catherine Deneuve — that defends men's "freedom to pester" has sparked an angry response from supporters of the #MeToo movement.

Like many others, cartoonists are reacting to the anti-#MeToo manifesto signed by 100 notable French women, including film star and sex symbol Catherine Deneuve.

To #MeToo adherents, the language of the letter (which you can read in English here) and its definitions sound rather dated. "Rape is a crime. But trying to pick up someone, however persistently or clumsily, is not — nor is gallantry an attack of machismo."

Related: Has the #MeToo movement gone too far or not enough?

This cartoon mocks French right-wing politician Nadine Morano, saying she believes women should be open to the right opportunity because it might lead to something good. The man says: "Hey lady, wanna fuck?" The lady says: "I sense that he wants to invite me out to dinner."

The letter accuses the #MeToo movement of re-oppressing women. "Just like in the good old witch hunt days, what we are once again witnessing here is puritanism in the name of a so-called greater good, claiming to promote the liberation and protection of women, only to enslave them to a status of eternal victim and reduce them to defenseless preys of male chauvinist demons."

Some of the most-pointed cartoons create visuals from the actual language of the letter. One passage in the letter reads: "She can make sure that her wages are equal to a man’s but not feel forever traumatized by a man who rubs himself against her in the subway, even if that is regarded as an offense. She can even consider this act as the expression of a great sexual deprivation, or even as a non-event."

The cartoon then turns it on its head, and challenges the idea that someone like Catherine Deneuve can speak for anyone. The woman on the left is talking about men on subways who fondle woman. Catherine Deneuve (right), responds that the real horror is having to take the subway at all.

This cartoon has a double message. First, someone like Catherine Deneuve has likely been able to curate the kind of men who express an interest in her. But the other message is more subtle. What if a woman is attracted to the man harassing her? What then?

Provocative stuff, but hardly the last word on this topic. In fact, the debate has only begun.

We'll end with one more cartoon. The woman says: "Excuse me, sonny, what's your hand doing on my ass?" The man replies: "Oh sorry. From the back you look like Catherine Deneuve."