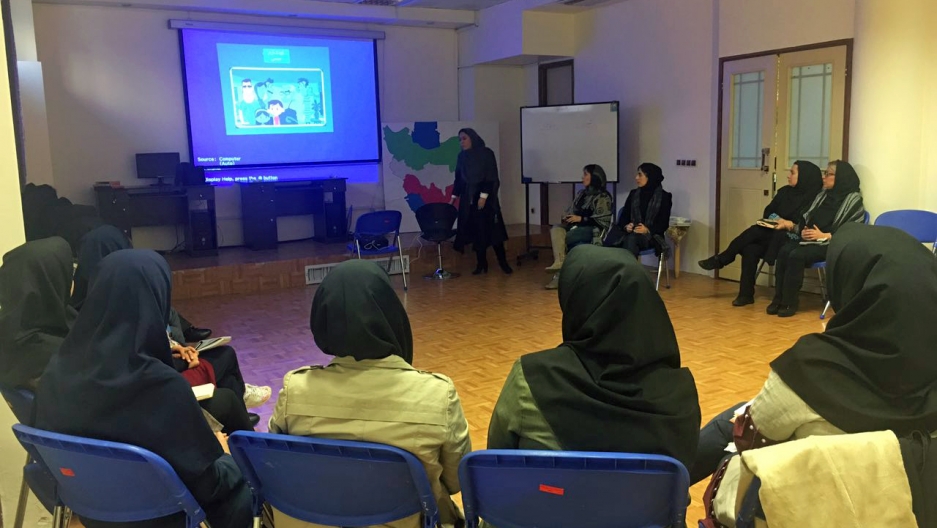 Yassi Ashki leads a workshop for teachers at a school in Tehran.

Yassi Ashki left Iran seven years ago, and she came to the US to study. When she first got to the Indiana University campus, she noticed two things.

First, "They were all wearing Uggs and pajamas," and at the health clinic, "there was a huge box of free condoms [...] and so many pamphlets about STDs."

Ashki took a couple of the pamphlets about sexually transmitted diseases home. Over the next couple of days, and after she'd gotten her own pair of Uggs and pajamas, she pored over the pamphlets. "I thought I knew everything," she recalls, "but I knew very little."

A couple of years later, and at a different school, a friend of hers came to the same realization. Narges Dorratoltaj was sitting in an infectious diseases class at Virginia Tech when the instructor began talking about STDs. "They started with the HIV/AIDS. I thought, 'OK, I know, I mean I have some information,'" she remembers, "and they started to talk about HPV, chlamydia, gonorrhea, and I was like ... 'What the hell is she talking about?' I had no clue what the professor was talking about."

Dorratoltaj was a 27-year-old PhD student. She came from a middle-class, educated family in Iran. How could she know so little about sexually transmitted diseases?

The two friends mulled over that question, and they came to a simple answer: Their knowledge about STDs was minimal because they were never taught anything about it. Sex is a taboo topic in Iran, and sex education there is almost nonexistent. "Whatever people learn, if they're lucky, they learn it from their parents; mostly they learn it from their peers and online from websites or social media," explains Dorratoltaj.

And so Dorratoltaj and Ashki came up with an idea: What if they started a website focused on sexual health? Specifically for Farsi speakers?

What started as a simple website with a couple of educational videos has now turned into a much bigger operation. First, it's no longer just the two of them. They have a team. They also run a nongovernmental organization — registered in the US as RAH Foundation and in Iran under Ctrl+S. They have an Instagram account with over 12,000 followers.

Ashki and Dorratoltaj say when they first brought up the idea to their parents, they were skeptical. "Go work on something else," they said, "like cancer, or Alzheimer's. STDs are not a big issue in Iran."

According to the United Nations, there were 66,000 people living with HIV in Iran's Islamic Republic in 2016 — and those numbers are probably low. There's no reliable data on sexually transmitted disease in Iran but Dorratoltaj points to an estimate from the World Health Organization — that around 26 million people in the Middle East and North Africa are infected with curable STDs. "That does not include herpes or HPV, the two most prevalent STDs worldwide," she explains in a TED Talk.

"It is there," Dorratoltaj says, "But we don't hear about it because of the taboo."

When she and Ashki first launched their website in 2014, they didn't know how it'd be received. But then, something unexpected happened. "We started to get many questions, one after another," says Dorratoltaj.

People began to write in. They trusted them with their most intimate problems, things they couldn't talk about with anyone else. To deal with the flood of messages, Dorratoltaj and Ashki teamed up with a group of health experts. The pair forwarded them the questions, and they got answers back.

And, the questions they got reinforced what they already suspected: That there are a lot of misconceptions.

Dorratoltaj reads one of them aloud, keeping it anonymous. "I'm afraid that I have HIV," it reads, "and now I'm dead. So, it doesn't matter if I know I have HIV or not. I'm going to be dead."

Dorratoltaj says her team explained why that is not true. "There are treatments," they wrote, "you can have a healthy life if you get tested."

Iran has a comprehensive health care system. One of its biggest successes has been a very effective birth control program that's been in place for more than two decades. But when it comes to sexual education, it's lacking. And that's what Dorratoltaj and Ashki want to change.

After their website got more recognition, Dorratoltaj and Ashki took their idea one step further. They wanted to run workshops on sexual health inside Iran. It took some negotiations with Iran's Ministry of Health and Medical Education but they finally got the go-ahead.

Today, they run these workshops in mosques and schools. Ashki, who's in Iran, trains volunteers so that they spread the message in the rural areas of the country.

They have also broadened their work to include education about sexual abuse prevention in children. The pair decided to do that after attendees in the sexual health awareness workshops came up to them, asking for advice on how to deal with child harassment cases.

In one recent session, at a school in Tehran, teachers sit around in a circle. Ashki stands in front of some graphics projected on a white screen. "If you find out that a child has been assaulted," she explains, "the first instinct is to be silent, to protect the kid's honor and dignity. But no, you should not be silent. You get help."

Dorratoltaj and Ashki say this is only the beginning of their work in Iran. They have a long list of what they want to change. High up on that list: sexual health awareness in school curricula. Then, more access to HPV vaccines and STD clinics.

"What I think would be [the] ideal scenario," Dorratoltaj says, "is having something like Planned Parenthood in Iran, where people can go and get tested and get whatever service they want."

Talking about sexual health in a conservative society is tricky, Dorratoltaj admits. "There are nights you cannot sleep. There are anxieties, stress because of the unknown that you have in the work."

But those feelings change, she says, when she reads the messages that come in. "Seeing the message of, 'I changed my behavior, I care about myself more than before, I got vaccinated,' I think these are the things that keep us motivated," she says.

And the most satisfying transformation so far?

"It was interesting how our parents changed," Dorratoltaj says. "At first, they were skeptical but now they know how important it is."