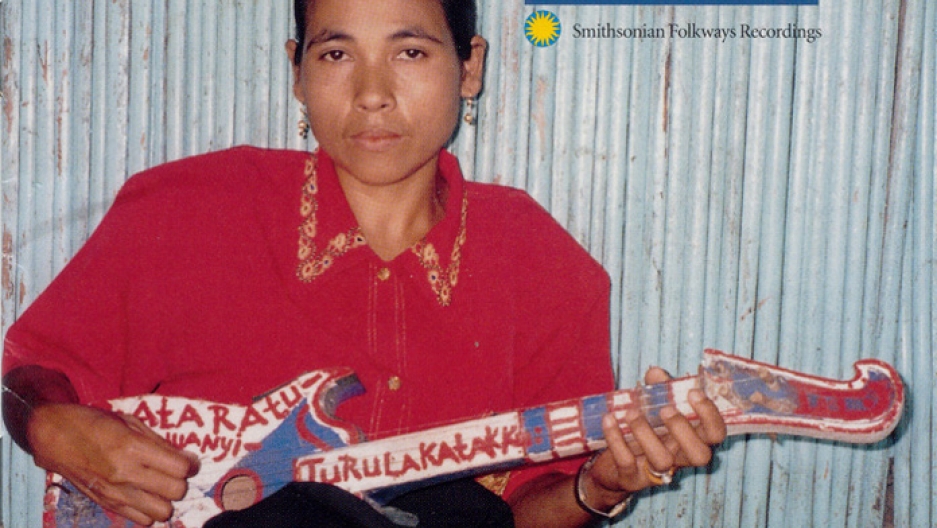 The album cover for "Music of Indonesia, Vol. 20: Indonesian Guitars."

A-side B-side is a reoccurring segment on The World as part of a partnership with Smithsonian Folklife Festival. The series compares the sounds and ideas of two songs, albums or artists. On the A-side: a folk or traditional selection; on the B-side: a contemporary selection.

"Stambul Naturil" and "Beatriz" are both folk songs, but they are not one and the same simply because of the genre.

Sometimes, even genre conventions don’t begin to explain what songs have in common. On today's A-side B-side, each song has a relationship between vocals and instrumentation that is playful and seductive.

"Stambul Naturil," by Usman Achmad and Diswonsoni, is a single track from "Music of Indonesia, Vol. 20: Indonesian Guitars." It’s from the Smithsonian Archives and the concept was to find the various ways the guitar is interpreted in Indonesia. Achmad’s vocals weave themselves between a sultry guitar and a bright ukulele. The relationships vary the tone and make for vocals that coast behind or glide neatly on top of an upbeat rhythm. It is not dissonance so much as two emotional tones trying to entice one toward the other.

RIYL, or recommended if you like, is an algorithm that selects similar songs using genre conventions and other influences. Oftentimes, RIYL helps us understand tropes in genres like folk music. However, RIYL fails us in this case, as the subtle similarities in "Beatriz" and "Stambul Naturil" escape the algorithm's power. But give the songs a deep listen. Yes, they both share familiar instruments. Yet there is more.

Camille Jackson’s "Beatriz" is an experimental folk song. It pairs light vocals that sometimes hop along with each pluck and other times lure the production into a smoother ambiance. There are intricate moments with distant clapping and wispy production notes. There’s a traceable shift from confident to solemn to content in Jackson’s voice that pulls or pushes away from the guitar. Although pleasant and chilled, "Beatriz" is not the same caliber of vocal performance as Stambul Naturil. Still, their qualities align.

In each, the vocal dances around the instrumental. It sneaks up behind it or drifts slightly over it. The instruments don’t exist just to pair with a fixed text; the voice engages them. Knee-deep in composition, after three or four deep listens "Beatriz" and "Stambul Naturil" reveal a similar charming quality to how voice relates to instruments. There is a beautiful balance in emotional contrasts and tonal shift that creates an idea of allure in two emotionally powerful songs.

Future Folk shares the stories of communities through the music that they make. It is a partnership between PRI’s The World and the Smithsonian Folklife Festival.