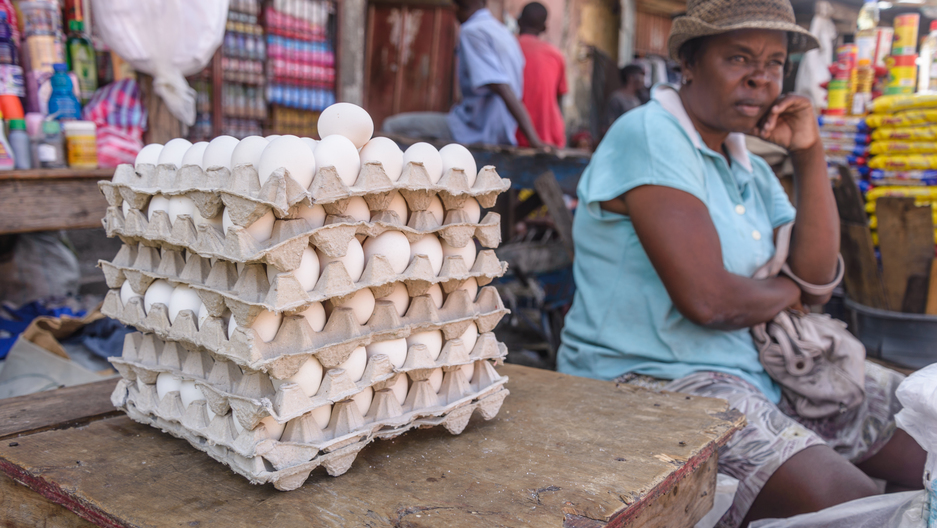 A woman sells eggs at the Marché Soloman in Port-au-Prince, Haiti. Most eggs bought and sold in Haiti have been illegally imported from the Dominican Republic.

On any given day, along the border that splits the island of Hispaniola, Haitians enter the Dominican Republic to buy eggs and sneak them back into Haiti, trying to evade customs agents.

Haiti effectively banned the import of Dominican eggs in 2008 and stepped up enforcement a few years ago. The cited reason was health concerns following reports of avian flu, but the ban has been touted as a way to protect domestic production.

And yet the egg imports keep flowing, driven by Haitians’ demand for cheap protein and Haiti’s difficulty producing its own.

Michel Chancy, an agronomist who advises the government on animal production policy, explains it this way: “[Egg production] is expensive everywhere, but especially in Haiti.” That’s largely because so much is imported — most of the feed, the cages and even the birds. Chancy says to be profitable, a farm should have at least 10,000 laying hens. Few Haitians can afford that, and few banks have the confidence to give them loans. 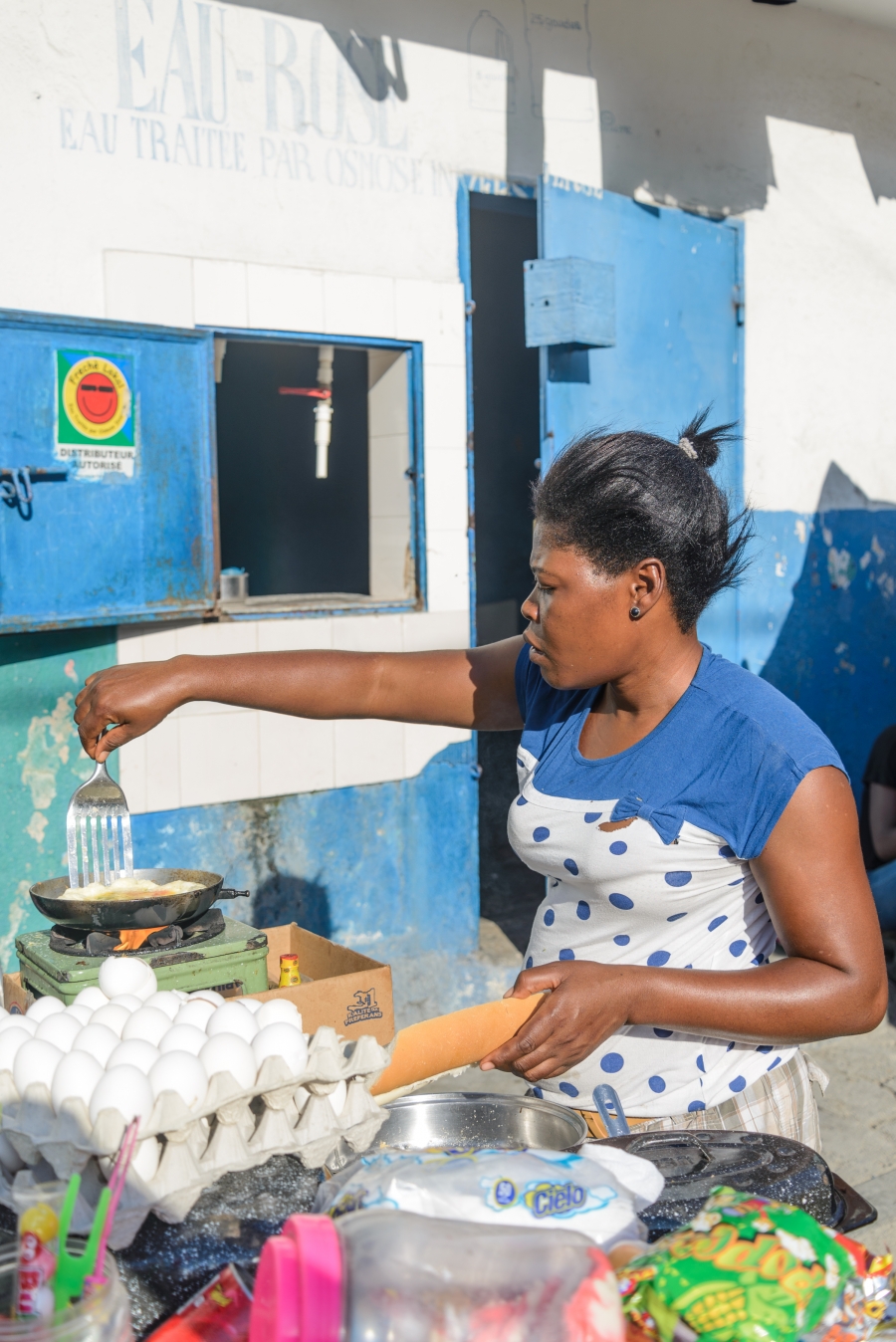 Phita, who did not give her last name, sells cooked eggs in Marché Salomon, in Port-au-Prince, Haiti.

In other words, Haiti’s egg problem is a stark symptom — and a symbol — of the cycle of poverty in which the country has been stuck for decades, if not centuries. Interrupting that cycle is a goal that keeps eluding the most well-intended government officials and advisors.

Blocking imports at the border incurs the ire of many Haitians doing what they can to make a living, like Jocelyn Lefevre. Selling Dominican eggs in a Port-au-Prince market he complains, “Customs agents are always taking our stuff. They burn it, they throw it out. They always chase us.”

Still, he keeps going back to the border, twice a week, because Haitian eggs are too scarce and expensive.

Haiti is heavily dependent on imports from the Dominican Republic and elsewhere, and it’s little surprise that the influx of cheap goods would continue, regardless of the law, in a country where about 60 percent of the population lives in poverty. In 2015, many more products were barred from crossing the border into Haiti — pasta, snacks, detergent, and some 20 others — and yet they continue to enter.

What might surprise the outside observer is that Haiti — a traditionally agricultural nation where chickens can be seen scurrying everywhere — can’t meet its own demand for something so basic as the egg.

Chancy wants to see Haiti do what the Dominican Republic has done. “They banned the import of all poultry products so they could protect investments,” he says. “Now, after 15 to 20 years, it’s paid off.” Unlike Haiti, Dominicans are able to meet the needs of their population and they even have a surplus, which they "dump it into the Haitian market.”

But the Dominican Republic didn’t start out with Haiti’s problems, such as cheap eggs flowing across the border and such an extreme lack of resources.

And Haiti has another big problem: political instability. According to Max Antoine, who heads Haiti’s government commission on border management, it’s a major reason the border is so porous.

“Political instability affects the materialization of policies,” he says, citing the frequent ousting of high-level officials and gaps between elected governments. “Whenever you start to implement a policy or initiative, then things change and you have to start all over again.” 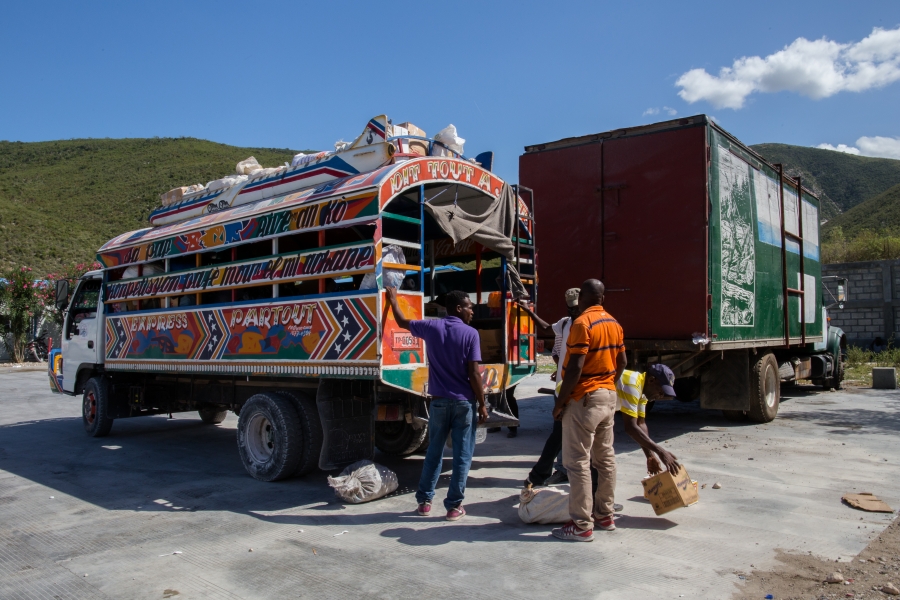 Haitian customs workers inspect a bus in Malpasse, Haiti, near the Dominican border. Many Dominican goods, including eggs, are banned from crossing into Haiti, causing importers to find ways to avoid customs.

In recent years, the US and Canada have helped Haiti fortify its border, and the Haitian government paid an Israeli firm $49 million to develop border infrastructure.

The results are mixed.

At the customs house in Malpasse, two hours from Port-au-Prince, the courtyard is full of wooden boats impounded for carrying eggs and other products across the nearby lake. But an official at the post says they only have one boat, and it’s too small to even fit the surveillance task force.

Antoine says the agents are often outmanned, and they are threatened and attacked by smugglers. Customs houses have been burned and one agent was even taken hostage two years ago.

But the egg ban has paid off, according to Chancy. He says the increased border enforcement in 2011 encouraged investment, and as a result domestic production went up seven-fold, from 1 to 7 million eggs per month, reaching about a fifth of overall consumption.

A major reason for the increase is that a chicken meat producer called Haiti Broilers began producing eggs near the Haitian capital with investment and co-management by a large Jamaican poultry company.

Dominique Charles Jean, the Haiti Broilers hatchery manager, says the Haiti operation, which has 400,000 laying hens and employs 200 people, started making a profit last year. Still, the Dominican imports are a concern. She says during the summer, when school is out and tourism is low in the Dominican Republic, so many cheap eggs enter the Haitian market that Haiti Broilers loses customers. 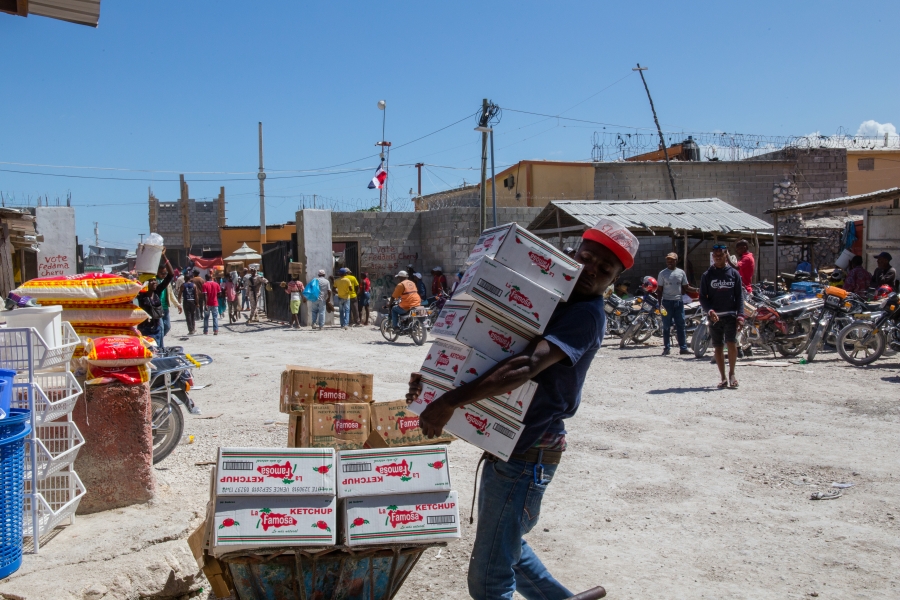 A man loads up a wheelbarrow with Dominican catsup on the Haitian side of the border.

Jean Max Carinard runs a family farm in the southern coastal town of Jacmel and has 10,000 laying hens. He, too, is able to make a profit, but he rails against the cheap competition brought to Haiti by ocean from the nearest Dominican city.

Carinard does not worry about domestic competition. In fact, if there are more Haitian egg companies, it could spur domestic feed production and bulk purchases that would bring down costs and it could create a lobby to reduce tariffs on the inputs they have to import.

Carinard generally agrees with Chancy on what must be done: The government should incentivize banks to give loans, it should find ways to make feed cheaper and it should control the border, they say.

They also agree that it’s a matter of choice that, despite the scarcity of means, the government can prioritize both domestic poultry production and border control.

“The state and Haitian society need to know what they want,” Chancy says. “Do they want to facilitate access to cheap products, or do they want to create work? That is the choice we have to make.”

But Haitians who are just scraping by want both. 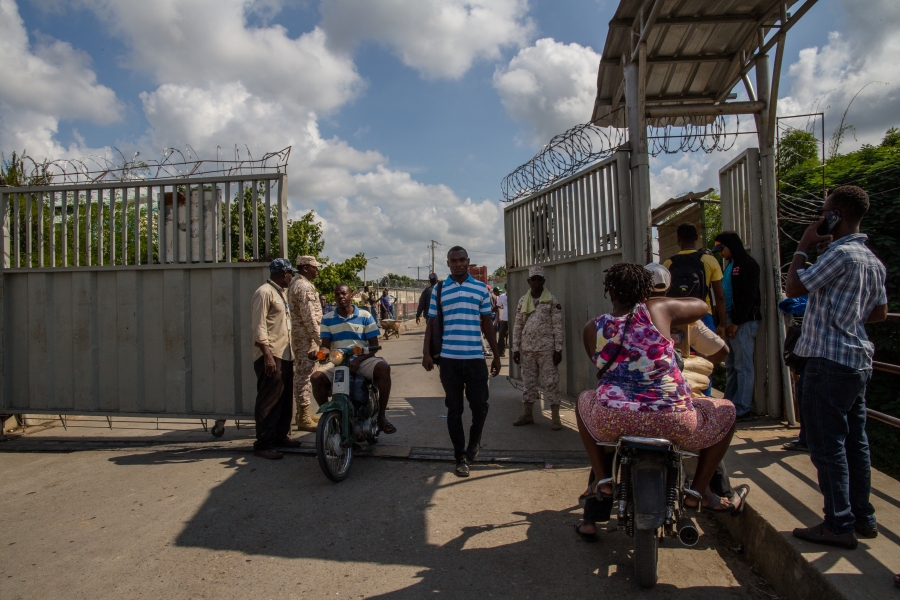 A woman on a motorcycle carries goods from the Dominican Republic into Haiti.

Jorel Hibart sells breakfast plates on a sidewalk in Port-au-Prince. He laments the fact that all the ingredients he uses are Dominican, but he doesn’t see a way around it.

“If they block the border,” he grumbles, “we’ll all die in this country.”

Domestic production advocates say that actually employment will rise and the country will be better off if the borders close. Damoclès Terméus works for the Ministry of Agriculture, running an experimental farm to see how poultry farmers can make money. He says if higher-ups decide to consistently put more of the agriculture budget into poultry, Haiti could be egg self-sufficient in 15 to 25 years.

Chancy objects, emphatically putting the number of years at five.

“We need to be optimistic,” he explains, in what sounds like as good a plan as any to break a vicious cycle, “because investment requires optimism. Investment is confidence.”

This story was produced in association with Round Earth Media, which is supporting the next generation of global journalists. Michel Joseph contributed to the report.