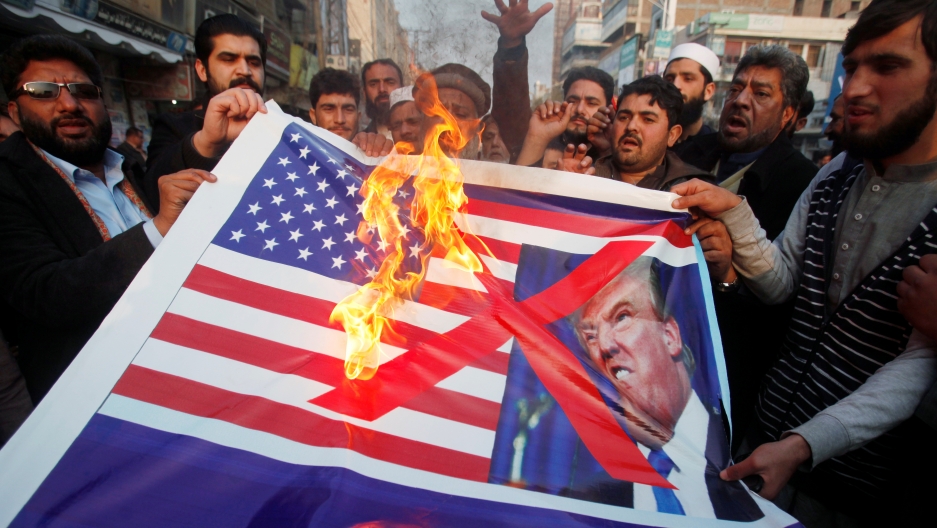 People burn a sign depicting a US flag and a picture of US President Donald Trump as they take part in an anti-US rally in Peshawar, Pakistan, Jan. 5, 2018.
Credit:

Washington accuses Pakistan of playing a dangerous double game of accepting billions in US aid while supporting militants who attack US forces in Afghanistan, including the Taliban.

The dramatic freeze in deliveries of military equipment and security funding comes after President Donald Trump lambasted Pakistan for its alleged support for militant safe havens, including in a furious New Year tweet.

The United States has foolishly given Pakistan more than 33 billion dollars in aid over the last 15 years, and they have given us nothing but lies & deceit, thinking of our leaders as fools. They give safe haven to the terrorists we hunt in Afghanistan, with little help. No more!

What does the US want from Pakistan?

Washington and Kabul accuse Pakistan of cynically supporting militant groups, including the Afghan Taliban and the Haqqani group.

The US and Afghanistan say the insurgents have safe havens in Pakistan's border areas and links to its shadowy military establishment, and the countries suspects Pakistan to use the insurgents in Afghanistan as a regional bulwark against arch-nemesis India.

Pakistan's support for these groups must end, Washington insists.

Islamabad has repeatedly denied the accusations, insisting it has eradicated safe havens and accusing the US of ignoring the thousands of people who have been killed on Pakistani soil and the billions of dollars spent fighting extremists.

It also levels the same charge at Kabul by accusing Afghanistan of harboring militants on its side of the border who then launch attacks on Pakistan.

“This is not Pakistan’s problem,” said Bina Shah, a Pakistani writer, columnist and blogger living in Karachi. “So I think to blame everything on us and say that we are the reason this war [hasn't] been won is ridiculous.”

When asked to describe how Pakistanis were reacting to the news, Shah said with “disappointment and frustration.”

Why hasn't Washington axed aid before?

US figures show that more than $33 billion has been given to Pakistan in direct aid since 2002.

US aid to Pakistan has been suspended before, notably after the US raid on the Pakistani town of Abbotabad in 2011 that killed al-Qaeda leader Osama bin Laden.

The discovery of the world's most wanted man, less than a mile from Pakistan's elite military academy, drew suspicions that he had been sheltered by the country's intelligence agency for years.

But despite the provocations, the US does not want to completely rupture its relationship with Pakistan, where anti-American sentiment already runs high.

Washington's footprint in Afghanistan is much smaller than it was at the height of the war, and it needs access to Pakistan's supply lines and airspace.

Pakistan is still believed to have the strongest influence over the Taliban, making its cooperation necessary for peace talks.

Pakistan also holds the Muslim world's only known nuclear arsenal and the US wants to prevent it from going to war with rival nuclear power India or collapsing and allowing the weapons to fall into the hands of extremists.

"They want to apply graduated pressure to Pakistan to change its policy rather than abandon it altogether," security analyst Hasan Askari said.

Will the US strategy work?

Although the suspension of around $1 billon in military aid might sound like a substantial blow to Pakistan's armed forces, US funding makes up just "4 or 5 percent of [Pakistan's] military budget, nothing more," says Ayesha Siddiqa, a research associate at the School of Oriental and African Studies in London and expert on Pakistan's military.

"I think the greater concern is not the billion dollars that have been cut off, it's the humiliation," says Siddiqa. "The signal from Pakistan is that 'you can't treat us like this.'"

The suspension of security assistance might see the US lose crucial influence over Pakistan, which will instead look to other countries for support.

China — which is investing some $60 billion in infrastructure projects in Pakistan — was the first to rush to Pakistan's defense after Trump's latest tweet criticizing its militant policy.

But there is no indication that China will tolerate any double-dealing with extremists, either.

In the end, observers say, until Washington addresses Pakistan's fears over India, it will not shake its support for militant proxies.

"There's no amount of bribery or threat that can ultimately make people act against what they consider to be their core interests," tweeted journalist Murtaza Mohammad Hussain.

Agence-France Presse reporting was used in this story.