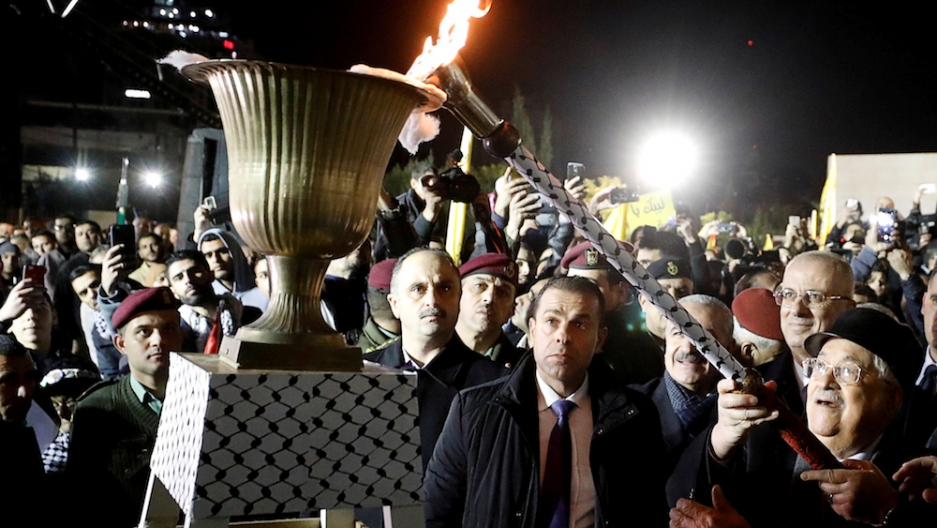 Palestinian President Mahmoud Abbas lights a torch during a rally marking the 53rd anniversary of the founding of the Fatah movement, in the West Bank city of Ramallah December 31, 2017.

Palestinian leaders said Wednesday they will not be "blackmailed" after US President Donald Trump threatened to cut aid worth more than $300 million annually, his latest provocative move that could upturn years of careful diplomacy.

Relations between Trump's White House and the Palestinians were already tense after the US president's recognition of Jerusalem as Israel's capital last month.

The December 6 announcement concerning the disputed city led Palestinian president Mahmoud Abbas to say the United States could no longer play any role in the Middle East peace process.

Trump's threat in a tweet on Tuesday to try to force the Palestinians into negotiations led to further outrage, though Israeli ministers lauded the move.

The Palestinians rely heavily on international aid, with many analysts, including Israelis, saying such assistance helps maintain stability in a volatile region.

"We pay the Palestinians HUNDRED OF MILLIONS OF DOLLARS a year and get no appreciation or respect," Trump tweeted.

"With the Palestinians no longer willing to talk peace, why should we make any of these massive future payments to them?"

It was not immediately clear whether Trump was threatening all of the budget, worth $319 million in 2016, according to US government figures.

The United States has long provided the Palestinian Authority with much-needed budgetary support and security assistance, as well as an additional $304 million for UN programmes in the West Bank and Gaza.

'Says what he thinks'

Israel receives more than $3 billion in military aid per year from Washington.

Abbas's spokesman said they were not against negotiations, but that talks should be "based on international laws and resolutions that have recognised an independent Palestinian state with east Jerusalem as its capital".

"Jerusalem is the eternal capital of the state of Palestine and it is not for sale for gold or billions," Nabil Abu Rudeina told AFP.

Senior Palestinian official Hanan Ashrawi said in a statement that "we will not be blackmailed".

"President Trump has sabotaged our search for peace, freedom and justice," she said.

"Now he dares to blame the Palestinians for the consequences of his own irresponsible actions!"

However, several Israeli ministers voiced support for Trump, with the country's right-wing government having seized on the US president's support to push ahead with initiatives seen as dealing further blows to remaining hopes for a two-state solution.

Culture and Sport Minister Miri Regev, from Prime Minister Benjamin Netanyahu's Likud party, said "you cannot on the one hand receive $300 million in American aid per year and at the same time close the door on negotiations."

"We are dealing with a president who says what he thinks clearly and does not resort to diplomatic convolutions that mean nothing," Regev told Israel's army radio.

Trump came to office boasting that he could achieve the "ultimate deal" that secures peace in the Middle East, something that has eluded presidents since the late 1960s.

For most of the past half century the United States has been seen as the indispensable — if sometimes imperfect — arbiter of the peace process.

Trump's actions are likely to cast that further in doubt.

He has heaped pressure on Palestinians to do a deal, threatening to close the de facto "embassy" in Washington in addition to recognising Israel's contested claim on Jerusalem and now threatening aid.

Efforts to harness improved Arab-Israel relations to push a peace deal have been at least temporarily derailed by Trump's Jerusalem recognition, breaking with decades of US policy.

It also prompted Abbas — 82 years old and facing the prospect of entering the history books as the leader who "lost Jerusalem" — to cancel a planned meeting with Vice President Mike Pence.

Pence was forced to delay a December visit to the Middle East until later this month, and aides on Tuesday rejected rumours of further delays.

"As we've said all along, the vice president is going to the Middle East in January," said Pence spokeswoman Alyssa Farah.

"We're finalizing details and will announce specifics of the full trip in the coming days."