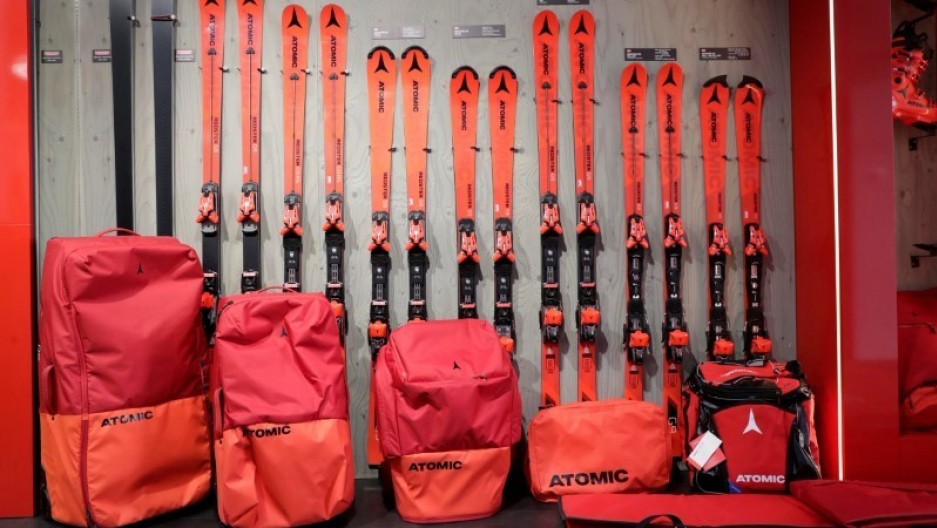 It is not just American hopes that will be riding on the performance of Mikaela Shiffrin when the world's top woman alpine skier takes to the slopes at the Winter Olympics in South Korea next month.

Half a world away in the small Austrian town of Altenmarkt, the marketing and tech teams at ski manufacturer Atomic will be closely watching the medal count in Pyeongchang, the culmination of about 18 months of internal company planning.

Of 900 staff based at the company south of Salzburg, 38 are part of a team of international specialists, whose job is to develop ever-sleeker and more maneuverable skis for everything from racing to backcountry touring.

Whereas in the early 1990s design was revolutionized by switching from long, straight racing skis to a side-cut "parabolic" shape, and later shifts focused on the camber, or arch, of the ski, the trend in recent years has been towards more advanced materials such as titanium.

Atomic General Manager Wolfgang Mayrhofer said the thinner, less dense materials, including lighter wood cores, and the deeper sidecuts permitted under new giant slalom rules have made a big difference to the skis.

"The skis are easier to turn," said Austria's Marcel Hirscher, the six-time overall World Cup champion who is bidding for his first Olympic gold medal in Pyeongchang.

"But now with the new materials they can ski different lines, they keep the same stability and rigidity but they are much more flexible, much more dampening.

"So it's big progress since the Sochi days, since the last Olympics."

In the speed events of downhill and super-G there has been no fundamental change to ski design in the past 10 years, according to Matt Humphreys, winter sports boss at HEAD UK, but new materials have changed their composition.

Austria-based HEAD, whose skis are used by Olympic champions Lindsey Vonn, Ted Ligety, Kjetil Jansrud and Aksel Lund Svindal, have said it is the only manufacturer to incorporate graphene, a super-thin, super-strong form of carbon that was isolated by scientists only in 2004.

The point is not to make racing skis lighter, as a heavier ski provides more stability for a downhill racer hitting speeds around 90 mph, but to improve the flexibility and the distribution of power.

"With us using graphene, we can get the flex pattern exactly how we want it to be ... the more we put in, the stiffer and stronger the ski becomes," said Humphreys.

That cutting-edge design does not end with the ski.

Minute, detailed effort goes into the fit and comfort of boots as well as their “canting” — the slight inward- or outward-tilting angle of the shoe that is tailored to match the angle of the skier's knees.

"Where we try and get ahead of the game is with some of our top athletes," Humphreys said.

"We do have casts of their feet and their lower legs so we can work on them in terms of pressure points and customization without the athlete having to be there."

For Atomic, their top athletes are local product Hirscher, who lives close to Altenmarkt, and Shiffrin, who won the slalom gold in Sochi and became the overall World Cup women's champion this year.

"I started skiing on Atomic when I was 12 and have skied Atomic skis, boots and bindings since then," the American told Reuters.

"It was just a natural progression for me to stick with the skis that I had been so confident on as I started racing on the World Cup."

Atomic, like the other manufacturers HEAD and Frances' Rossignol, send their technical experts to accompany the top racers at every event, working closely with their coaches and national federations, to tune and service their gear like a Formula One team to suit the conditions.

"They're athletes, they're champions, they're demanding," Mayrhofer added.

"Therefore you need a team. For Hirscher, for Shiffrin you have a dedicated team with ski makers, boot specialists, you have all the experts there."

With the event now in sight, Mayrhofer said he felt quietly confident all of their planning would pay off.

"I have a good feeling we are nicely prepared. I feel good we will have everything we need," he said. "Then it's always (necessary) of course to be a bit lucky also.

"But we have great athletes, we have all the stuff together which is needed to win."