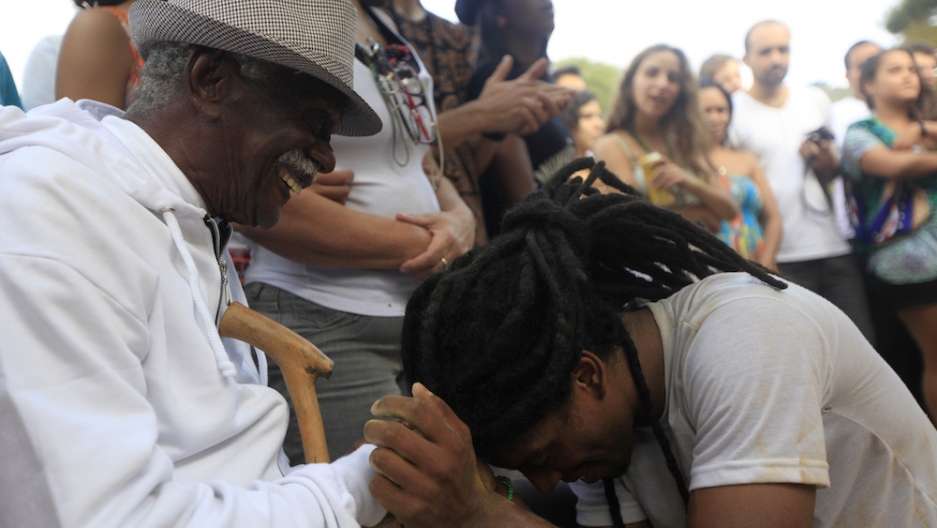 A man greets Manoel Seabra, 94, the oldest man at the community of Quilombo Sao Jose, descendants of African slaves, during a Afro-Brazilian culture celebration marking the anniversary of the abolition of slavery, in Valenca, in Rio de Janeiro state May 17, 2014.

Hundreds of years after Brazilian slaves first fled to rebel communities called quilombos, remnants of those outposts of freedom live on in the heart of Rio de Janeiro.

Often the quilombos were established in remote places — better to get away from pursuers.

However, three founded in Rio have survived as living testaments to a tradition at the core of Brazil's complicated racial history.

Of course, Afro-Brazilians do not need to escape slavery anymore, but in a country riven by racial inequality and historic injustices, the quilombos now serve as focal points for resistance of a more contemporary kind.

The Sacopa quilombo is one of the city's best kept secrets, a beautiful area of tropical forest that has ended up being surrounded by the high-rent Lagoa Rodrigo de Freitas neighborhood.

Back in the 19th century, long before the fancy apartment buildings sprang up, this was where slaves seeking freedom would gather, starting new lives. The population grew and, around it, so did Rio.

"We're still here because I have been very stubborn. They tried everything to take this land from us but we have the rights," said Luiz Sacopa, 74, who is the eldest living descendant of the original slaves.

He says he has lost count of the attempts by people to oust the quilombo.

One neighbor planted marijuana on the plot to try to incriminate them.

Then, citing noise complaints, the Rio state court stopped the quilombo from hosting cultural events like feijoada feasts and classes in capoeira, a dance-like martial art developed by fugitive slaves.

That was "a very hard blow," Sacopa said.

"We were very respectful, always ending everything by 8:00 or 9:00 pm," said another family member, Jose Claudio Torres Freitas, during an event staged on official Black Consciousness Day.

"This is the only day we're allowed to do anything," he said.

The modern-day quilombos like Sacopa do have some legal protection.

In 2003, then leftist president Luiz Inacio Lula da Silva signed a decree regularizing boundaries and titles for descendants of quilombo slaves, who are collectively known as quilombolas.

However, the bureaucratic procedures are complex and while the three quilombos in Rio de Janeiro have been recognized, they are still waiting for the second stage of the paperwork to be completed.

The Pedra do Sal quilombo, right in the center of Rio near the port, is where many slaves went soon after arriving on ships from Africa.

The site is also rich in cultural significance as a key location in the development of the still thriving Afro-Brazilian religion candomble.

But legal uncertainties mean few of those from the 25 families descending from the original Pedra do Sal community live there anymore.

"The neighborhood wasn't like this back then — it was very isolated," said Damiao Braga, the quilombola leader.

"But it was gradually invaded and swallowed by the city. There were many disputes, including with the Catholic church."

Even recognition from UNESCO for the nearby Valongo Wharf, where slave ships used to dock, has not helped much.

"We have international support but the disputes remain. Empty buildings have been taken over and once that happens, it's not easy to reverse," Braga said.

Out in the west of Rio, where most of the Olympic Games took place in 2016, quilombola descendant Adilson Almeida helps oversee yet another of these pockets of history.

His ancestors founded the Camorim quilombo after escaping back in the 16th century. When slavery ended, the family returned and set up a community there.

In this out of the way area, the quilombolas went about their lives until 2014 when the 20 resident families woke up to find construction work starting: the woodland that was historically theirs had been picked as the site of housing for Olympic referees.

In this case, the quilombo had yet to receive the paperwork from even the first stage of the registration procedures to obtain legal protection, and the land was never returned to the community.

But Almeida still has hopes.

Archeologists found thousands of artifacts from the 16th and 17th centuries during research there last year, and the disputed area has been named an official archeological site by the National Institute for Historic and Artistic Patrimony.

"Now we have a solid legal base and it would be hard for something like the 2014 invasion to happen again," Almeida said.