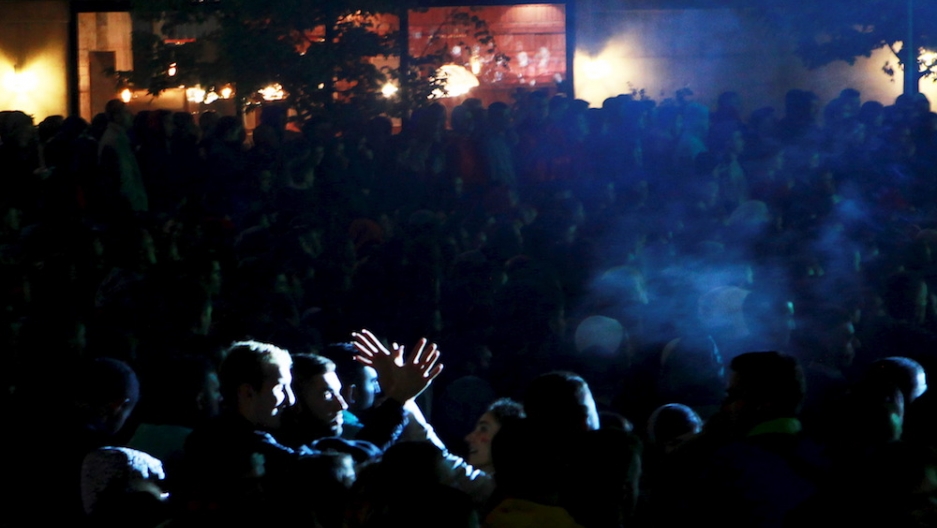 A young man makes the eagle symbol of the Albanian flag with his hands while watching on a screen the Euro 2016 qualifying soccer match between Albania and Serbia, in Kosovo's capital Pristina, October 8, 2015.

It is Albania's national symbol, but the eagle may soon only be found on the flag. The majestic bird is threatened with extinction due to widespread poaching of raptors.

On the side of a national motorway, just 18 miles north of the capital Tirana, a vendor offers motorists a common buzzard for an average price of $65-100.

The buzzard is a protected species, just like the golden eagle.

But the man isn't concerned as he exhibits the bird with its wing wounded by a bullet and its talons tied.

"I didn't wound it. I was given it to sell. The buyers will keep it in a cage in a bar or a restaurant," he says.

Whether the customers want to stuff them or to keep them in captivity, they can find these birds for sale on the street.

Of the four species of vultures that used to exist in Albania, "only one, the Egyptian vulture, remains and its population has been extremely reduced," says Mirjan Topi, author of Albania's first bird guide.

So too the dwindling number of golden eagles, a two-headed specimen of which features on the flag of this mountainous Balkan country.

According to experts, some 25 years ago there were between 100 and 200 couples of golden eagles. That number today has been cut in half, "a dramatic decline," says Topi.

For biologist Taulant Bino, president of the Albanian Ornithological Society, the golden eagle "is on the road to extinction."

"Fifty years ago or even in the early 1990s, we could see it on every summit," he says.

On a global scale, the golden eagle (Aquila chrysaetos) is not classified as a threatened species, according to the International Union for Conservation of Nature (IUCN).

But in Albania nowadays the place where you are most likely to see a golden eagle is "stuffed in bars, restaurants or hotels," Topi says. 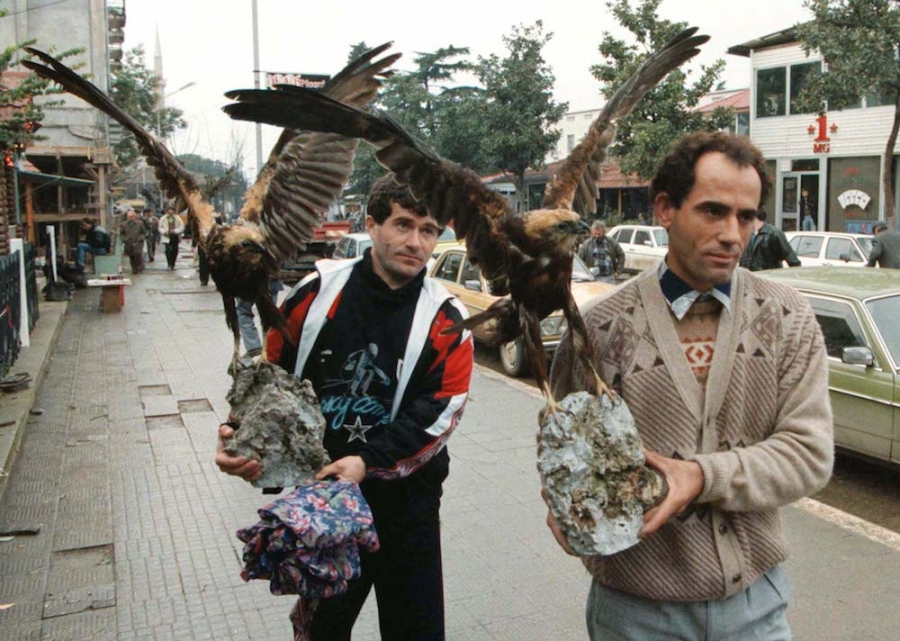 In this file photo from 1998, two unemployed men from the northern town of Lezhe, arrive in Tirana with stuffed and mounted eagles, Albania's national symbol, which they bought from hunters in the Albanian northern mountains and later embalmed in order to sell to bars or tourists to support their families.

The idea is "to decorate the interior to attract customers, at the price of a sickening spectacle, in violation of the law, and in defiance of the state and institutions," the bird specialist laments.

In the southern region of Orikum, a man in his 50s, who would only identify himself as Petrit, is proud of the eagle he bought for 400 euros. He displays it in his bar next to the national flag and other stuffed birds.

"It is more and more rare to find an eagle," he notes.

The state has threatened to close his bar if he continues to show off his trophy but Petrit is not worried.

And in the mountains of Prenish along the border with Macedonia, a hunter who gave his name as Edmond appeared unfazed to be found with two buzzards he had just killed.

The 35-year-old explained that he plans to use the birds as decoration in his bar "to get more customers."

There has been a hunting ban in Albania since 2014. Authorities say it has curtailed a large number of the 2,000-3,000 Italian hunters who are estimated to have killed more than 150,000 birds, including hundreds of raptors over the last decade.

But they admitted, when contacted by AFP, that the ban's effectiveness is limited as it only imposes fines.

According to Ermal Halimi, a specialist on the issue at the ministry of tourism and environment, there are plans to toughen the law, including "prison terms for all offences that contribute to the disappearance of protected animals,"

But that's not the whole story.

Another threat, perhaps even more insidious, hangs over the raptors: the poisoned carcasses that shepherds leave in the field to protect their flocks from wolves.

"A single carcass is enough to kill several vultures if they find it before the wolf," says Nexhip Hysolokaj, an environmental expert in the Orikum region where in March, six eagles and vultures were found dead from poison.

Fines have never been issued over this practice which shepherds seem to have no intention of giving up.

"The sheep are the ones who feed us, they are our pride and wolves massacre them! We have no choice," says 83-year old Sado Xhelili as he guards his flock.