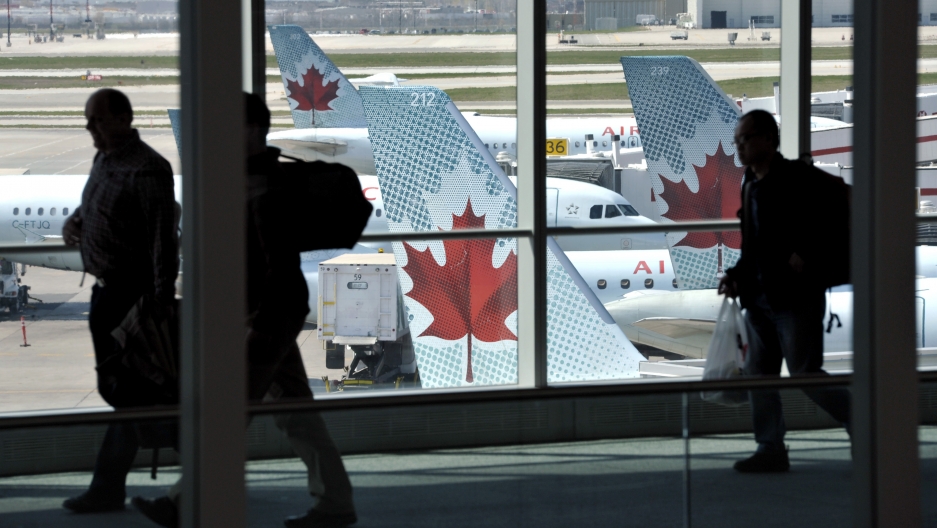 Passengers walk past Air Canada planes on the runway at Pearson International Airport in Toronto April 13, 2012.

If you've ever flown out of the Toronto Pearson International Airport to the US, chances are you've passed through its US preclearance station.

These are US Customs and Border Protection facilities staffed with American agents that will clear passengers before they board a plane headed to the US. And there are several of them worldwide.

According to its website, the CBP has "more than 600 law enforcement officers and agricultural specialists at 15 air Preclearance locations in six countries:" Ireland, Aruba, The Bahamas, Bermuda, Canada and the United Arab Emirates.

The idea for preclearance stations goes back to the 1950s. Informal talks about the one at the Toronto Pearson airport began in 1952 and was formalized in 1999. Initially, the preclearance stations were set up so that passengers clear customs at the point of departure. At that time, not many US airports had customs facilities.

But in the past few years, the Department of Homeland Security has been looking to expand the number of these stations as a way to reduce the risk of potential terrorists reaching US borders.

“The further out you can push the border the better,” former first secretary of Homeland Security, Tom Ridge, told The New York Times last year.

Jeh Johnson, the former Secretary of Homeland Security, used a football metaphor in 2015 to explain the expansion of preclearance stations.

"Every opportunity I have to defend the homeland from the 50-yard line as opposed to the one-yard line we should take," he said.

In 2016, he announced that in the previous year the US "denied boarding to over 10,700 travelers or 29 per day seeking to enter the United States," adding that the plan was to add 10 airports in nine countries to the preclearance list.

American officials began negotiations with several countries, including the Netherlands, Sweden and Belgium. They also started talks with Canada. They wanted to increase the number of preclearance stations at Canadian airports and introduce new ones at bus and train stations.

But they also want to increase the power of the American agents at these stations by arming them, authorizing them to conduct strip searches of travelers and make arrests.

That didn't sit well with privacy groups and civil rights activists in Canada. They worry about the amount of power these American law enforcement officials have on Canadian soil.

Emily Gilbert teaches at The University of Toronto and her research focuses on immigration, borders and security. She says under the old agreement between the US and Canada, "if you tried to pass US customs, and the US customs agent was asking you questions that you didn't want to answer, you could immediately remove yourself and be back in Canada. [...] Whereas now, in the example of the bus and train stations, the US is given reasonable right to detain."

Gilbert adds that the US has passed legislation to not only allow the US agents to operate in Canada, but be subject to US jurisdiction.

"For example, if they were to shoot someone, which could happen, they would be subject to US laws and regulations and the court system not to the Canadian one."

But in November, Ralph Goodale, Canada's Public Safety Minister, defended the new powers for American border agents, arguing that they will be used in limited instances. The measures passed two weeks ago.

Gilbert says that this whole debate has created "an interesting layer of jurisdiction, where our government is arguing that if you're in Canada, the constitution applies but the US has passed a law that says its agents are subject to US law."

The negotiations to add more preclearance stations in Canada and in nine other countries began under President Barak Obama's watch. But for at least one potential host country, the decision became easier to make after President Donald Trump took office.

In January, after Trump announced its travel ban, the Dutch government ended talks with the US about a US preclearance station at its Schiphol Airport.

History: In the 1920s, the government established mechanisms of “remote control,” and demanded that other countries cooperate in a visa-vetting regime.

So, given the potential risks that come with preclearance stations, why do countries such as Canada agree to have them in the first place?

Some argue that there are financial incentives to these preclearance stations. That's because passengers prefer to fly through an airport that lets them clear US customs and immigration before they land in the US.

In Ireland, for example, after the travel ban was announced, Kevin Toland, chief executive of the Dublin Airport Authority, told the BBC that the preclearance facility at Dublin airport is a "critical point of competitive advantage for Ireland and Dublin Airport."

Other countries agree with the US officials that these stations help them fight terrorist attacks as well as drug and human smuggling.

As for Canada, Gilbert thinks it's all about keeping the borders open.

"Canada relies so much on US trade and crossing over the border for business or for tourism or other reasons," she says, "that really we bend over backwards with US requests to try and keep the borders as open as possible and that usually means adopting US security policies."

The New York Times reported this week that the Homeland Security is expanding its overseas operation even further.