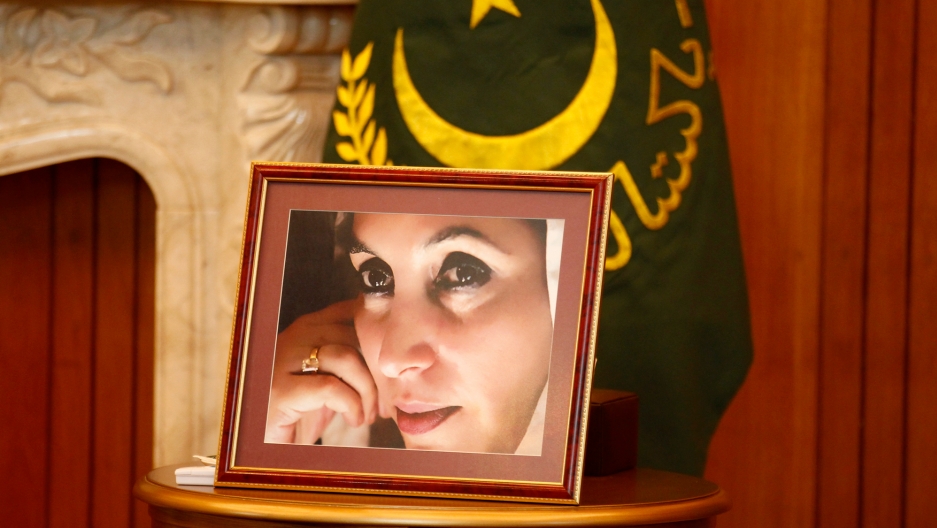 A portrait of assassinated Pakistani Prime Minister Benazir Bhutto is displayed atop a table in Islamabad.

It's been 10 years since former Pakistani Prime Minister Benazir Bhutto was killed in Rawalpindi. For many, the assassination of Bhutto has left unanswered questions about her death that still fuel conspiracy theories.

They are the only people ever to be convicted in the December 27, 2007 assassination, the most definitive accounts of which claim an assassin shot Bhutto in the neck and then blew himself up, killing 24 people.

But there is no confirmation of who organized the killing or why. Here are the leading theories about who killed Bhutto:

Then-president Pervez Musharraf's government blamed the assassination on Pakistani Taliban chief Baitullah Mehsud, who denied any involvement. He was killed in a US drone attack in 2009.

Bhutto had been a fierce opponent of Islamic extremists in the country. She was threatened by al-Qaeda, the Taliban, local jihadist groups and potentially by elements in the Pakistani establishment.

But investigators largely focused on lower-level operatives, paying little attention to the hierarchy in the planning, financing and execution of the assassination.

Musharraf himself is alleged to have been part of a broad conspiracy to have Bhutto, his political rival, killed before elections.

In 2013 a Pakistani court formally charged him with the killing in an unprecedented move against an ex-army chief.

Musharraf fled Pakistan in 2016 and has remained in self-imposed exile ever since. He was declared a fugitive in the case earlier this year.

At the request of the Pakistan Peoples Party (PPP) government that came to power soon after Bhutto's murder, a three-member UN team was dispatched to investigate the killing.

In its 70-page report released in 2010, the UN held Musharraf's administration responsible for failing to provide Bhutto with the necessary security.

"Bhutto's assassination could have been prevented if adequate security measures had been taken," it said.

The team also cited numerous failures by police to properly investigate the murder and preserve the integrity of the crime scene.

Less than two hours after the attack, senior police officer Khurram Shahzad hosed down the the scene. He was one of the two officers convicted this year.

Police told the UN commission that they collected just 23 pieces of evidence from the scene, "in a case where one would normally have expected thousands," according to the report.

But the UN team hinted at something beyond police incompetence, saying the official investigation was likely stifled by the security establishment.

However it stopped short of naming suspects in the plot to kill Bhutto, saying that responsibility lay with the Pakistani courts.

Following Bhutto's death, the PPP came to power and her widower Asif Ali Zardari was elected president. But he failed to make headway unravelling the mysteries behind the murder, drawing fresh allegations of conspiracy.

Speculation was further fuelled after Zardari's senior aide Bilal Sheikh was killed by a suicide bomber in Karachi in 2013.

Sheikh had been in charge of Bhutto's security when she returned to Karachi from exile in October 2007. Bomb attacks targeted her convoy, killing around 140 people.

However, Chilean diplomat Heraldo Munoz, who led the UN investigation, said it was ridiculous to imagine Bhutto's widower had been involved in her death.

Al-Qaeda wanted her dead, he has argued, while the Pakistani Taliban carried out the attack — possibly with the support of rogue intelligence agents — and local police arranged a cover-up which he was convinced "came from higher up."

He has further argued that Bhutto's own security failed her and those who encouraged her to return to Pakistan did not provide her with protection.

Other speculation pointed toward Bhutto's trusted bodyguard Khalid Shahensha, with video clips showing him making strange gestures at the podium from which Bhutto addressed the rally moments before her death.

Months after the assassination, Shahensha was mysteriously gunned down in Karachi.