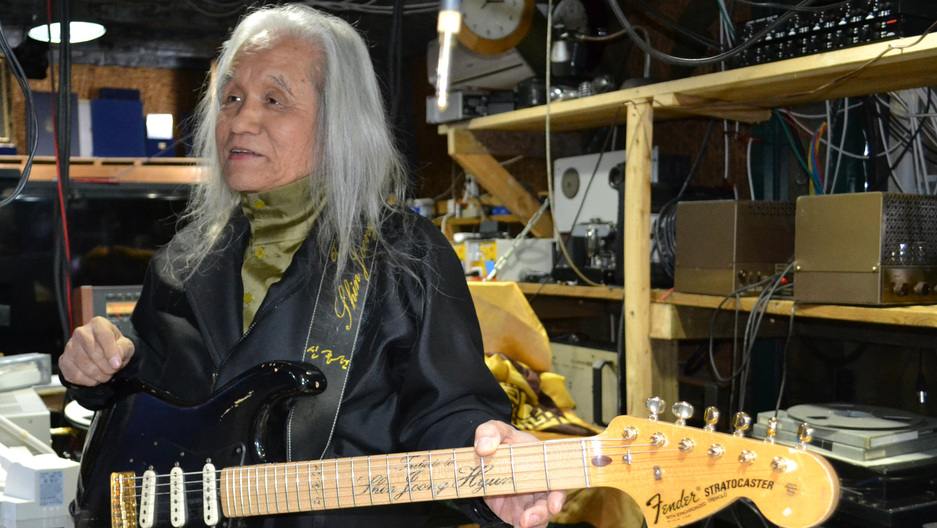 Korea's godfather of rock Shin Joong-hyun got his start as a teenage guitarist at the Yongsan Garrison in Seoul. Now the US military base is closing.

Concrete walls topped with concertina wire is what most South Koreans only ever see of the Yongsan Garrison, a sprawling US military base in the center of Seoul.

But as a teenage guitarist in 1955, Shin Joong-hyun remembers the first time he entered the base. He and other local musicians had been hired to entertain soldiers with American songs, which Shin says were all but unheard of to most Koreans at that time.

“I knew nothing about American music then,” he says, recalling that he needed to learn jazz, R&B and rock 'n' roll numbers for auditions at the clubs on the base.

By hearing imported records on the jukebox and listening to the US military’s Armed Forces Korea radio network, Shin says he got the hang of it. Soon, he and the others took what they learned inside the base and began playing American music for local audiences.

Today, Shin is known as the godfather of Korean rock.

Shin says he feels nostalgic for the place where he got his start, especially now that it will soon be gone.

“It was like a home to me,” Shin says. “Without the Yongsan Garrison, it feels like my generation’s culture will soon be gone and me along with it.”

The US military is in the process of relocating American soldiers to a facility outside the capital and transferring the garrison’s 617 acres to the South Korean government, which plans to convert the land into a public park. That will bring an end to more than a century of foreign occupation of the area; Yongsan was first a headquarters for colonial Japan’s forces in the early 20th century, and since the Korean War, had been home to the US Eighth Army and other US units.

The base leaves behind a mark on South Korea, says Daniel Oh, co-creator of Yongsan Legacy, an online forum dedicated to the garrison’s history.

“We see it as a window to modern Korean culture," he says.

Oh explains that the base was both a conduit for American culture into South Korea as well as a creator of jobs, because the US military played such an oversized role in the country’s post-war development.

Aside from being the birthplace of Korean rock, it’s where the country’s entertainment, automotive and even shoe making industries trace their roots, Oh says, adding that the Yongsan Garrison also provided work for local ceramic and portrait artists and influenced fashion designers who saw Americans in Seoul wearing Western styles.

But because the base has been closed off for so long, many Koreans see it as a “black hole inside the city,” according to Oh.

For Kang Tae-an, who has lived just outside the Yongsan Garrison since the 1970s, the best thing to come out of the base was American food.

“It was a dream,” she says, recalling all the products, like ice cream, jam and peanut butter, that were not available in South Korean stores when she was a child, but were sold in shops in neighborhoods that were home to US soldiers.

Kang, who runs Gastro Tour Seoul, says the culinary legacy of the Yongsan base lives on in the communities that surround it. They were the first to have American-style bakeries and restaurants in the city and are still where South Koreans go to find “the authentic flavor and taste” of Western food, she says.

The Yongsan Garrison has also influenced some South Korean filmmakers, like director Bong Joon-ho, and his 2006 monster movie, "The Host."

The film opens with an American military mortician ordering his subordinate to pour formaldehyde down the drain and into Seoul’s Han River — an act that leads to the creation of a bloodthirsty creature that terrorizes the capital.

This scene was based on a 2000 incident that took place inside the garrison, in which a mortuary officer oversaw the disposal of a reported 192 bottles of the embalming liquid. The event touched off a legal battle between the US military and local authorities and led to protests by environmental activists that still continue.

“The film made South Koreans more aware of the pollution that’s hidden inside the US base,” says Shin Soo-yeon of Green Korea. “And this monster is still alive.”

Shin points to recent studies conducted by South Korea’s Ministry of Environment that indicate high levels of groundwater contamination in and around Yongsan Garrison.

The Seoul Metropolitan Government writes in an email that the US military “should clean and purify the water in the sewers of Yongsan Post before returning [it] to Korea.”

It goes on to explain that the USFK’s responsibilities for addressing environmental concerns are outlined in the Status of Armed Forces Agreement (SOFA) with South Korea.

The statement concludes, “Our number one priority remains ensuring the continued health and safety of our service members, families, civilian workforce, and Korean neighbors.”

“The SOFA has allowed American soldiers to get away with committing offenses here,” says Kim, who was handing out pamphlets that detail allegations of environmental pollution caused by the US military.

Kim adds that it’s hard for her to see anything good that’s come from the Yongsan Garrison.