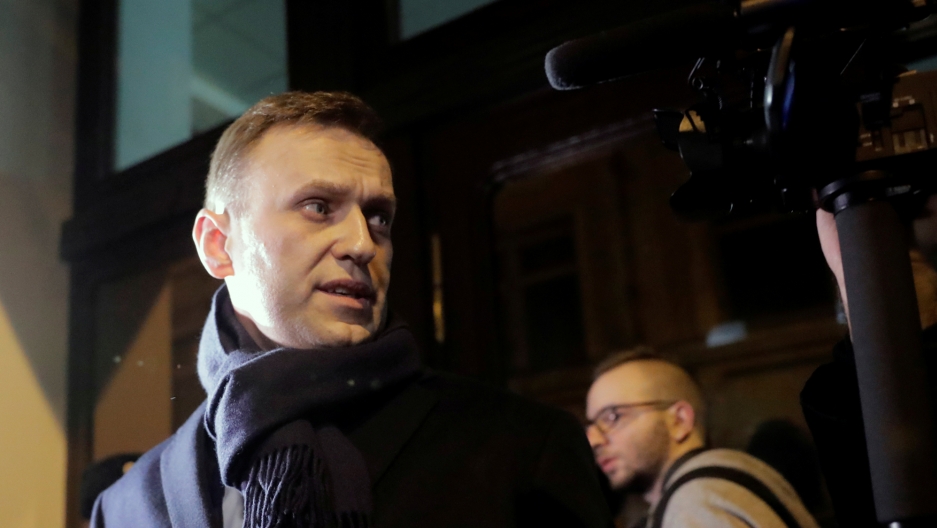 Russian opposition leader Alexei Navalny speaks to the media after submitting his documents to be registered as a presidential candidate in Moscow, Dec. 24, 2017.

Russian opposition leader Alexei Navalny was barred on Monday from running in next year's presidential election after officials ruled he was ineligible to take part due to a suspended prison sentence he says was trumped up.

Russia authorities on Tuesday rejected concerns that the decision could undermine the vote's legitimacy.

Navalny is seen by many as the only Russian opposition leader who stands a fighting chance of challenging Putin.

The European Union weighed in on the controversy Tuesday, saying the refusal to register Navalny cast "serious doubt" on the election.

The 41-year-old lawyer maintains that the criminal case against him is politically motivated. He urged his supporters to stage a "vote strike" instead.

Critics say banning Navalny would undermine the legitimacy of the vote.

"We cannot agree with this point of view," Putin's spokesman Dmitry Peskov said.

He insisted that barring Navalny from running "can in no way affect the legitimacy of the election."

Peskov also said any calls to boycott the election should be "rigorously studied" — a thinly veiled threat of punishment.

EU external services spokeswoman Maja Kocijancic said the ban on Navalny "casts a serious doubt on political pluralism in Russia and the prospect of democratic elections next year."

"Politically-motivated charges should not be used against political participation," she said in a statement on Tuesday.

"We expect the Russian authorities to ensure that there is a level playing field, including in the presidential elections that will take place on 18 March."

The Council of Europe's decision-making body, the Committee of Ministers, has urged Russia to allow Navalny to stand for election despite what it called his "arbitrary and unfair" fraud conviction.

Kocijancic said Navalny had been judged by the European Court of Human Rights to have been denied the right to a fair trial.

In the face of persistent harassment Navalny has built a robust protest movement including nearly 200,000 campaign volunteers.

Over the past year, he has traveled across the country, stumping for votes and seeking to shift public attitudes amid widespread political apathy.

On Sunday, more than 15,000 supporters from 20 cities formally endorsed his nomination bid in a culmination of his Western-style election campaign.

Putin clearly indicated this month that Navalny would not be allowed to run however.

Asked why, Putin — who has refused to mention Navalny by name in public — said the opposition was hoping for a "coup" but would not succeed.

Putin, 65, has announced that he will seek a fourth presidential term, which would extend his rule until 2024 and make him the longest-serving Russian leader since dictator Joseph Stalin.

Opposed only by token opposition candidates, he is widely expected to sail to victory.

But with the result of the vote a foregone conclusion, turnout could be low, harming Putin's hopes for a clear new mandate.

Navalny's threat to organize a voter strike could further affect the turnout.

In a sign the Kremlin was taking the threat seriously, Russian Orthodox Patriarch Kirill on Tuesday called on the faithful to take part in the election.

"We must participate to make a contribution to shaping the future of our country," he said.

Navalny pledged to use all resources at his disposal to convince as many voters as possible to boycott the election.

"Vladimir Putin is very scared," he said. "He is afraid of competing with me."

Liberal business daily Vedomosti said Navalny had proved that he was "the main Russian politician of 2017."

"By working in the regions Navalny has managed to prove not only to the electorate but also to the authorities that he is a sizeable, genuine political figure," Vedomosti said in an editorial.

Political analyst Ekaterina Schulmann said allowing Navalny to become a presidential candidate would be a huge risk for the Kremlin.

"Setting the ageing leader against the young wolf is very dangerous," she told AFP.

"It is clear whose side time is on. The risk would be too high for the system."