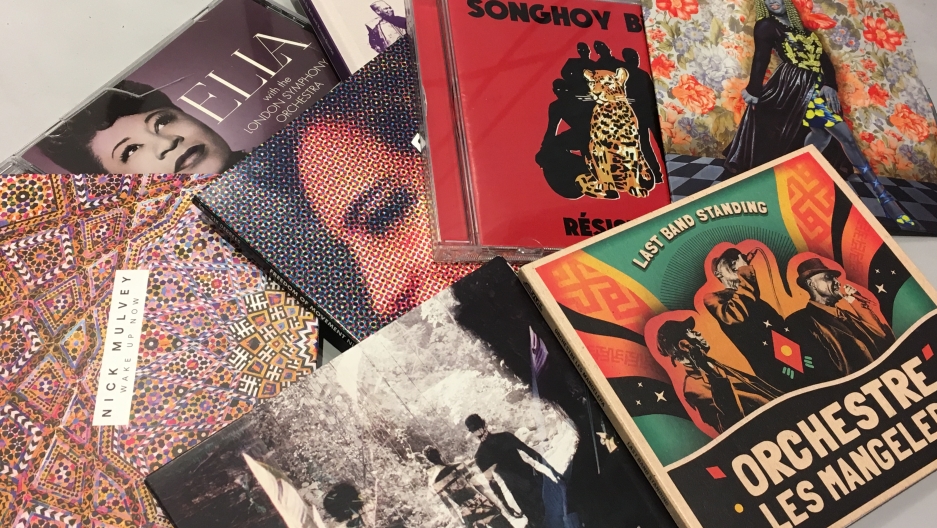 A sample of The World's favorite music picks for 2017.

There was a lot of great music released in 2017. It was hard to narrow down our favorites, but here they are.

Violence in Venezuela has touched the rock band La Vida Boheme. Their booking agent was kidnapped and murdered. Their manager was kidnapped, too. So the band left Caracas and made a new start in Mexico City. This album reflects all that and more.

Miranda is a world traveler from Brazil; her musical collaborators are from all over the globe. And while I knew of her music prior to this solo release, this recording came as an unexpected surprise this year. It's all new compositions (and one cover, of "Julia" by Lennon and McCartney), and Miranda tackles each one as if it were a different medium she has to mold and sculpt.

It's almost hard to believe tracks like "Amazonia Amor" and "I Am..." are from the same musician and on the same album. But that's what makes this Nina Miranda album so delightful.

This album transports you back to a time when parts of Africa were discovering the sounds of other parts of the continent. In this case, Orchestre les Mangelepa originates in Lubumbashi, in what is now the Democratic Republic of the Congo, in the 1960s, but migrated to Tanzania and then Nairobi, Kenya, where they became the leading exponent of Congolese rumba, central Africa's own version of Afro-Cuban music. This recording is new, though, so modern technology delivers clean sound, but the heart of this band is as large as ever.

Certain musicians are loved for their sound. Audiences only want to hear that sound. But artists are restless people who live in that tension of wanting to grow, and who are worried that their loyal audiences might not enjoy the product of their restlessness.

Oumou Sangaré stretches out on "Mogoya" in a way that she never has. If you already know Oumou Sangaré's music, you'll hear the electronic bubbles that inject an orbiting urgency into her sound. Tony Allen, Fela Kuti's former drummer, sits in and compounds that urgency. Oumou's unmistakeable voice though keeps an earthiness to this Malian queen's latest project.

Songs of resistance are at the core of Songhoy Blues' latest album. In fact, they titled their album "Resistance." The band is from Mali and they tackle issues like voter apathy and race. Aliou Toure, the lead vocalist, tells us, "When you write a song about racism, it's a big deal."

If there's one string quartet that captures the concept of world music, it would have to be Kronos Quartet. Founder and violinist David Harrington seems to always be on a quest to search for new sounds and new partnerships. This year, they teamed up with Mali's Trio Da Kali.

"Wake Up Now" is a brilliant album from UK singer-songwriter Nick Mulvey. It's a personal album and Mulvey isn't afraid to take on topical subjects like the refugee crisis and fracking. While the lyrics to some of the tunes may be hard-hitting, the music is rich and varied. It's a beautifully produced album.

I could use a lot of adjectives to describe this album: Gorgeous, atmospheric and soothing are just a few I'd choose. And here are a couple more: lush and mystical. There are a lot of flutes and birdsong, which make the album sound a bit otherworldly, but Björk's voice keeps things grounded. The lyrics make it personal. This is Björk at her best.

This alt-Latino band from Los Angeles had a really successful year with their album "Freedom is Free." And for my money, they also had the best name: Chicano Batman. They have a retro funk sound, but modern awareness, too.

5. Ella Fitzgerald & London Symphony Orchestra, "Someone to Watch Over Me"

This was one of the most pleasant surprises of the year. This year marked the 100th anniversary of the birth of Ella Fitzgerald, the first lady of song. In an effort to help celebrate, Ella's crystal clear voice was brought out of the vaults of Verve and Decca and layered over new arrangements by the London Symphony Orchestra. I'm usually not a fan of this technique, but WOW! This was a totally new listening experience and brought a smile to my face.

Arca’s self-titled album feels like it drifts in a space between folkloric and metallic.

There are several moments throughout the album that balance hymns against a harsh metallic tone and digital production. One of my favorite things about this album is that it has the grand and adventurous aspects of an epic poem with all of the vulnerability of a personal narrative.

Through all of the moments of grief this year, coping and processing were my default. There are stretches of time that are filled with fear, anxiety, nostalgia and denial. There’s no one way to lean into. Doing it all in your head can feel overwrought or theatrical, yet it embraces all of those moments. That’s what Rest sounds like to me. Charlotte Gainsbourg album offers a way to discover moments of grief that may last minutes or days or hours. I appreciate that she has written songs that experience grief in moments outside of isolation.

When I first heard “Drink I’m Sippin on” it gave me this carefree, confident feeling that is really present throughout the entire track. Yaeji’s latest EP embraces house beats and dreamy pop over whispered and reserved lyrics. At times, Yaeji switches between Korean and English, which gives the EP new styles of pacing and rhythm. It is undeniably a window into all the ways Yaeji is willing to experiment.

"Take Me Apart" is Kelela’s debut studio album, but it takes the best pieces of her work and stitches them together. This album about a breakup gives depth to the experience through physical ideas of sound. It’s luxurious, silky, warm and crisp. With each piece of narrative, Kelela brings an emotional maturity that highlights the strength of her voice. Kelela’s voice traces along passion so well that each song feels sung in the moment.