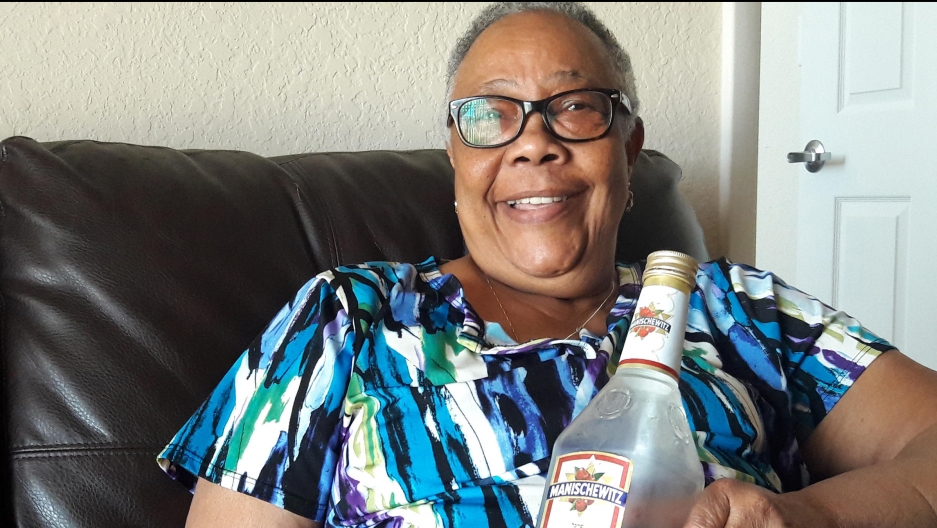 Hazel Bethel is a Manischewitz wine devotee. She's originally from Trinidad and was introduced to the wine by friends who worked in Jewish homes in New York.

Just over a year ago, I was scrolling through Instagram when I saw a picture of  a billboard in Haiti advertising Manischewitz wine. The kosher wine has been a constant in Jewish homes for Passover seders and sacramental occasions.

In Jewish circles, Manischewitz has a certain nostalgic value, but it’s not exactly considered a fine wine.

Or as one bartender recently told the Washington Post, it’s “the drink of choice when you were 14 and nothing else was available in the liquor cabinet.” 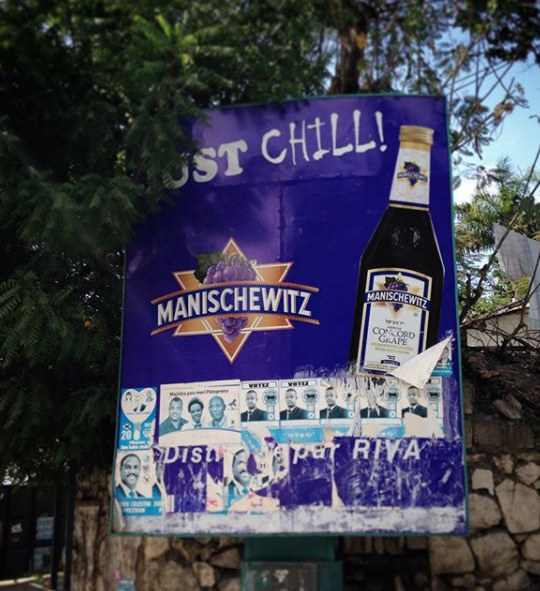 A billboard in Haiti advertising Manischewitz wine. Miami television journalist Glenna Milberg posted the Instagram photo of the billborad while she was in Port-au-Prince covering the presidential election.

Yet the very sweet Manischewitz wine is a hit in some Caribbean communities, where it draws respect and praise, especially around Christmas.

"It's the immigrant's fine wine," explains Carla Hill. Her mom, who is originally from Trinidad, is a Manischewitz aficionado. Hill is not.

Miami television journalist Glenna Milberg posted the Instagram photo of the Manischewitz billboard in Haiti. She was in Port-au-Prince covering the presidential election.

“I think the caption I put under it was something like, ‘A kosher Creole connection. Who knew?'” says Milberg. “Which is kind of a Jewish way to say things. Who knew?”

I grew up with Manischewitz wine. I am not Jewish, but my very Haitian and Catholic mom swore by the stuff. She wasn’t much of a drinker, but for Christmas there was always a bottle of Manischewitz. And it’s not just my mom. Among my circle of friends from the Caribbean — Jamaica, Trinidad and Tobago, St. Vincent and the Grenadines — it isn’t hard to find a Manischewitz connection. Usually, it’s our parents who discovered the wine after moving to the US.

Milberg also grew up with Manischewitz wine. “Manischewitz was this ubiquitous presence on the table just like the beautiful china and the seder plates,” she says. During our interview she was stumped. People actually enjoyed it on purpose? “No disrespect to Manischewitz,” says Milberg. “It’s horrible. It’s sweet, it syrupy, it’s ugggh, gaggy,”

Hazel Bethel, Hill's mom, strongly disagrees. For her, “Manischewitz is put in most everything.”

She drizzles it over ice cream. “Get some black cherry ice cream and some Manischewitz. It’s the bomb.” She spikes coffee with it, and when she’s just in the mood for a glass of wine, “Manischewitz, of course,” she replies. “Manischewitz.”

When Bethel moved to the United States from Trinidad, she first settled in New York where other Trinidadian expats introduced her to Manischewitz wine. Many of her friends worked as housekeepers or caretakers in Jewish homes.

“You see it there and next thing you know you go out and buy it and it’s really cheap,” she says. One bottle is around $5.

In South Florida, you can find it in mainstream grocery stores, and it’s regularly stocked in the smaller stores that cater to the Caribbean and Latin American communities. The wine probably became popular in the Caribbean by way of the diaspora in the US, who introduced it to family back home.

Manischewitz wine has long enjoyed crossover appeal. Last year, the Wall Street Journal ran a story about its popularity in Asian American communities and in the 1950s and '60s it was also a popular wine among the African Americans.

“Sammy Davis Jr., who converted to Judaism, at some point endorsed Manischewitz,” says Jay Buchsbaum, director of Wine Education at Royal Wine Corporation, one of the top kosher wine importers. The company is not affiliated with Manischewitz.

He says when Jews first arrived to New York they needed wine for most religious ceremonies and holidays. “The only grapes that were available was something called the Concord variety of grapes. They’re not sweet,” he says. “So in order to make them palatable, they would make this very sour grape into wine and then they would add sugar.”

It turns out, the very, very sweet wine is just the right flavor profile for Bethel’s go-to Christmas drink, sorrel. In Trinidad, she says, it’s not Christmas without the fragrant drink made from hibiscus blooms. “Some people put white rum. I choose Manischewitz,” she says.

Bethel's daughter Carla Hill jokes about her mom’s love of the kosher wine. Like the time her mom had a girl’s night in: “Child, they were pulling out the Manischewitz and glasses. And I was like, 'They’re about to get lit up in here on some Manischewitz!'”

Bethel is unfazed. “My kids feel I should be drinking something more high class," she says, "but it’s just good enough class for me.”