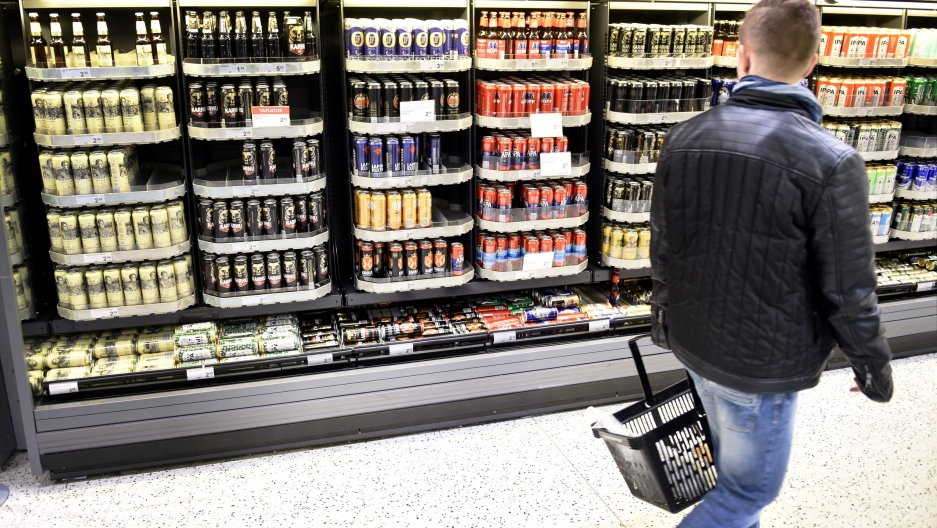 A man passes a shelf of beers on sale in a supermarket in Helsinki.

In countries near the Arctic Circle, it’s cold and dark for much of the year.

That, as you may have guessed, leads to some pretty specific drinking habits.

Perhaps the best way to describe it is kalsarikannit — the Finnish word for “the feeling when you are going to get drunk home alone in your underwear with no intention of going out.”

As a result, Nordic countries tend to view alcohol consumption as a public health issue, and have very strict alcohol regulations. Finland’s alcohol laws are no exception. But its people are more divided on the topic.

“Finnish people tend to see alcohol policy in relation to their own drinking, and also as a relationship between the state and the citizen,” says Matilda Hellman, a sociologist with the University of Helsinki.

Finland’s parliament recently voted to loosen up its alcohol policy, which has been in place since the 1960s. Supermarkets will be able to sell beer and cider that have up to 5.5 percent alcohol (up from 4.7 percent). Restaurants and bars will be able to stay open later without special permission, as will the state-run retail monopoly Alko, the only place Finns can buy hard liquor.

Critics of the change in alcohol policy argue that it could increase drinking in young people and increase rates of alcohol abuse, but some Finns say the change is long overdue.

"We are very divided on this question in Finland," Hellman says, "and this country deviates from the rest of Europe and the rest of the Nordic countries in this way."

Hear more about drinking culture in Finland by listening to the interview.