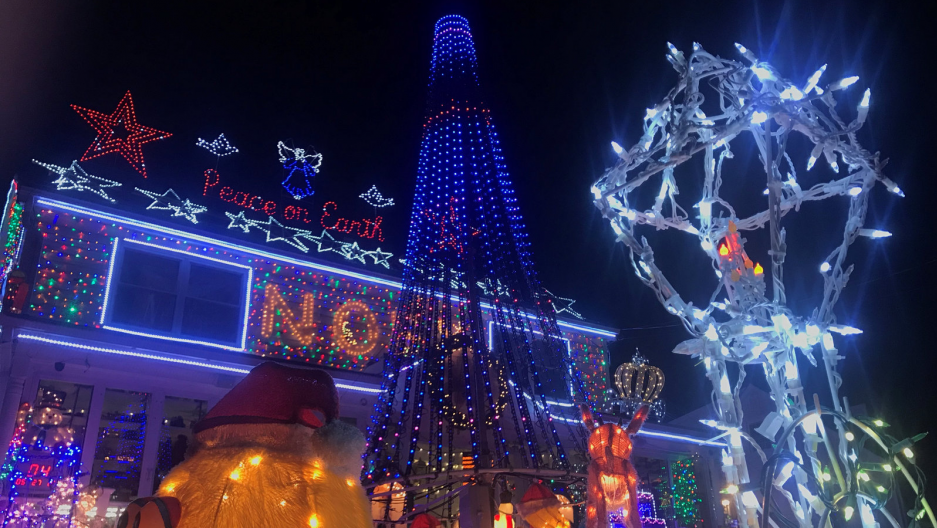 Christmas lights decorations are lit at the Halliwell family home in Roseville Terrace in Fairfield, Connecticut, on Dec. 20, 2017.

Over-the-top Christmas displays have turned normally quiet neighborhoods in New York, New Jersey and Connecticut into tourist destinations — and pitted neighbor against neighbor in a battle of privacy versus holiday cheer.

Amid the bedazzled homes in the Dyker Heights section of New York's Brooklyn borough, December crowds from as far away as Japan are expected to top last year's 100,000 gawkers, said Fran Vella-Marrone, president of Dyker Heights Civic Association. Tour buses arrive nightly from Maryland and elsewhere during peak season from Dec. 15 to Jan. 1.

"This is a residential neighborhood — not Times Square!" Vella-Marrone said.

On a quiet dead-end street in Old Bridge, New Jersey, meanwhile, neighbors took matters into their own hands. When crowds returned to gape at Tom Apruzzi's annual display of 300,000 lights decking his home, some neighbors told CBS2 they were outraged by the legions of onlookers and Apruzzi said he bore the brunt of their anger.

"There's been a broken windshield on one of my trucks, there's been spitting on sides of the truck, harassment issues. Starting to get pretty bad," Apruzzi told CBS2-TV.

As part of the deal, neighbors agreed to a temporary parking ban on one side of the street. The homeowner, who could not be reached for comment, agreed to turn off the lights an hour earlier — by 9 p.m. local time on weekdays — and to turn down the volume on a loop of the theme song from "Frozen," Kalamaras said.

Some neighbors — and even potential neighbors — remain delighted by the flashy exhibit. Olia Yelner, an attorney who is considering moving to the neighborhood from nearby Trumbull, Connecticut, parked at a home for sale that overlooks the Halliwell's display and gazed at the spectacle with her 3-year-old daughter and 1-year-old son.

"We thought that if we bought it we could look out onto the lights each evening," she said, breaking into a smile.