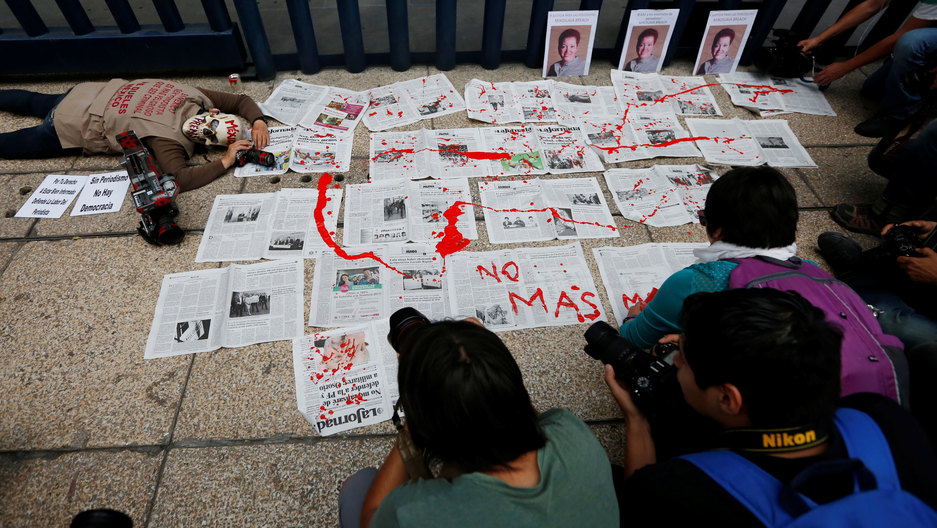 Journalists and activists protest the murder of Mexican journalist Miroslava Breach, outside the Attorney General's Office in Mexico City in March 2017. Newspapers scattered on the sidewalk read "No More Deaths." Mexican officials said they recorded more than 23,000 murders in 2017, making it the most violent year in more than two decades.

2017 was Mexico's most violent year in two decades, with 23,101 murders carried out between January and November, according to official figures released Friday.

The number of murders in the first 11 months of this year surpassed the previous record of 22,409 killings during the whole of 2011.

In November alone, 2,212 murders were recorded, while 2,380 killings were carried out in October, making it the most violent month since the authorities began keeping records two decades ago.

Violence has surged across Mexico over the last decade after former president Felipe Calderon's government declared war against the country's powerful drug cartels in late 2006.

Some 190,000 people have died in drug-related violence since then.

This year, the killings spread to states which had previously escaped clashes between cartels — including Baja California Sur, a northwestern state popular with tourists where the murder rate has more than doubled from last year's total.

According to experts, this year's considerable increase in violence is the result of cartels fragmenting into smaller, more brutal cells.

In a bid to address the issue, Mexico's congress last week approved a controversial internal security law that would formalize the military's role in domestic security.

The move drew criticism from rights groups concerned about the militarization of the country — while UN rights chief Zeid Ra’ad Al-Hussein said earlier this month it "risks weakening incentives for the civilian authorities to fully assume their law enforcement roles."

"More than a decade after the armed forces were deployed in the so-called war on drugs, violence has not abated and many human rights violations and abuses ... continue to be committed by various state and non-state actors," he said in a statement.