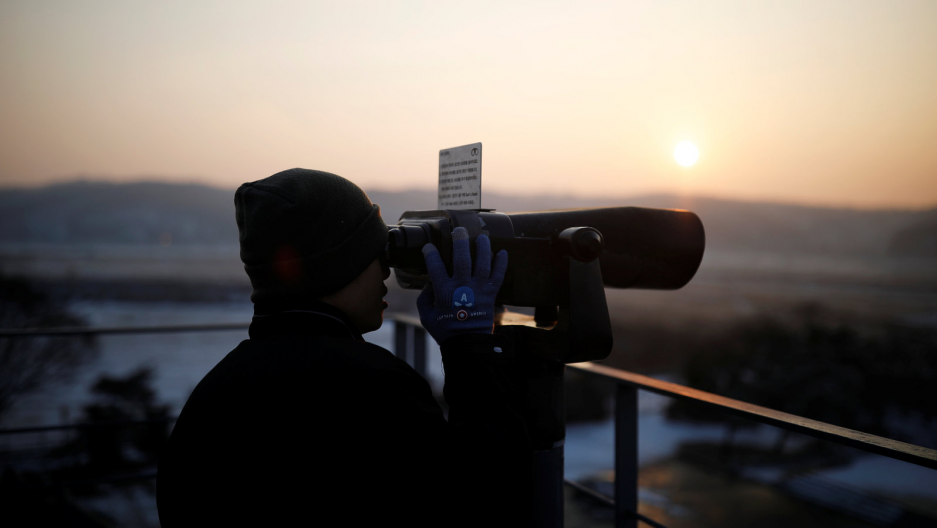 A man looks toward the north through a pair of binoculars near the demilitarized zone separating the two Koreas, in Paju, South Korea, Dec. 21, 2017.

South Korean guards fired warning shots across the heavily militarized border with North Korea on Thursday as a soldier from the North defected in thick fog, complicating efforts to ease tensions over Pyongyang's nuclear and missile programs.

A South Korean defense ministry official said up to 20 warning shots were fired as North Korean troops approached too near the "military demarcation line" at the demilitarized zone (DMZ), apparently in search of the missing soldier.

Thursday's defection came about five weeks after a North Korean soldier suffered critical gunshot wounds during a defection dash across the border.

Two North Korean civilians were also found in a fishing boat on Wednesday and had sought to defect, officials in the South said.

That brings the total number of North Koreans who have defected by taking dangerous routes either directly across the border or by sea to 15 so far this year, including two other soldiers. That is three times the number last year, according to South Korean officials.

Tensions on the Korean peninsula were already high after reclusive, impoverished North Korea accelerated testing of its missile and nuclear programs this year in defiance of international pressure and UN sanctions.

The defections also threaten to complicate South Korea's efforts to ensure the smooth running of the 2018 Winter Olympics, which begin in Pyeongchang in February.

South Korean President Moon Jae-in said on Tuesday he had proposed postponing major military drills with the United States until after the games in an attempt to soothe relations, although officials in Seoul later said any proposed delay would depend on the North not engaging in any "provocations."

In a notice published online, the US military's 8th Army said a "significant number of North Korean propaganda leaflets and CDs" had been distributed at "strategic locations" on multiple US military bases in South Korea.

The notice called on troops to report any suspicious individuals to help combat potential "insider threats" that could disrupt military operations.

The United States stations 28,500 troops in South Korea, a legacy of the 1950-53 Korean War, and North Korea says regular US-South Korean military drills are a prelude to invasion. It regularly threatens to destroy the United States and its two key Asian allies, South Korea and Japan.

Seoul says more than 880 North Koreans have defected to the rich, democratic South so far this year, but the vast majority have taken a less dangerous route through China.

The number of defectors arriving successfully in the South has dropped since North Korean leader Kim Jong-un took power in late 2011, a trend defectors and experts say may be linked to a crackdown by Pyongyang.

There was no immediate comment from the secretive North about the latest incidents.

However, the North's state media released a statement sharply denying US allegations this week that Pyongyang was behind a number of recent cyber attacks.

Washington has publicly blamed North Korean hackers for a cyber attack in May that crippled hospitals, banks and other companies. Researchers also say the North was likely behind attacks on virtual currency exchanges.

The military drills with the United States have also complicated relations with China. The proposed delay in drills was discussed during a summit between Moon and Chinese President Xi Jinping last week after the proposal was submitted to Washington, an official at the presidential Blue House said this week.

China and Russia have proposed a "freeze for freeze" arrangement under which North Korea would stop its nuclear and missile tests in exchange for a halt to the exercises, but there has been little interest from Washington or Pyongyang.

In Thursday's defection, a low-ranking soldier crossed the border near a South Korean guard post, South Korea's Joint Chiefs of Staff spokesman, Roh Jae-cheon, said. No shots were fired at the soldier.

Surveillance equipment detected him despite heavy fog that limited visibility to about 100 meters, Roh said.

South Korean guards fired about 20 warning shots at North Korean troops near the border presumably searching for the defector about half an hour later, a defense ministry official in the South told Reuters.

Gunfire from the North was detected later but the target could not be determined, the official said.

South Korea's Unification Ministry also said maritime police had found two North Korean men drifting in a small boat off the coast on Wednesday. The pair "expressed their willingness to defect," a ministry official said, and their claim for asylum was being investigated.

The North Korean soldier who was shot several times during a daring dash across the border on Nov. 13 has since been identified as 24-year-old Oh Chong-song and is now in a military hospital south of Seoul.

His treatment for gunshot wounds and pre-existing conditions has included two major operations; intelligence officials will begin questioning him soon.

Haejin Choi and Josh Smith of Reuters reported from Seoul.