This cartoon is a comment on Austrailia's current harsh immigration policy which offshores asylum-seekers arriving by boat and places them in overseas detention camps.

After more than four years in immigration detention in the middle of the South Pacific, the Iranian cartoonist known as "Eaten Fish" has a new view: the fjords of Norway.

Eaten Fish — the pen name of cartoonist Ali Dorani — arrived in Stavanger, Norway, on Dec. 17 after the city agreed to host him for at least the next two years through the International Cities of Refuge Network (ICORN). ICORN partners with cities around the globe to provide shelter to writers and artists at risk, giving them a safe place for them to continue their craft without harassment or persecution. 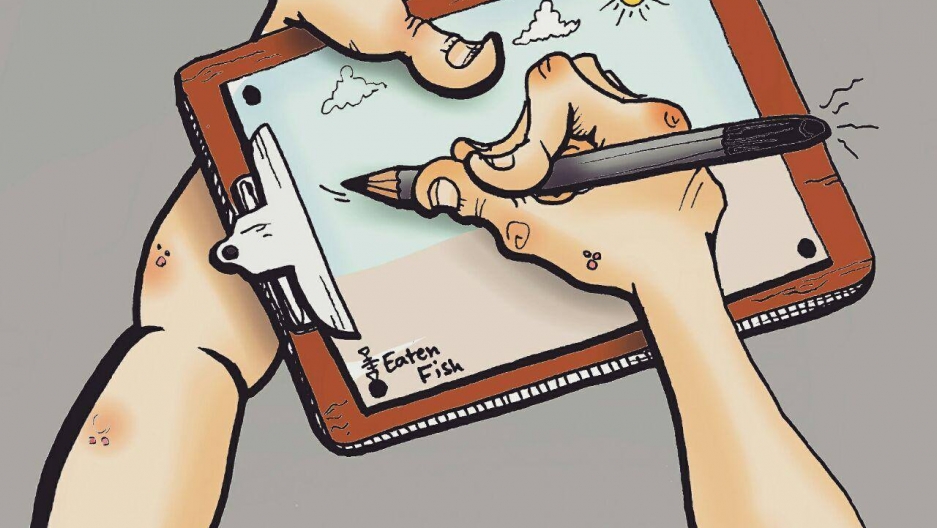 In an ICORN press release shortly after arriving, Eaten Fish said of his new home: "I met a lot of lovely people who care for me and who worked hard so I could come to Norway. I am in a fairy-tale city. The safest place I’ve ever been in. My journey has just started.”

His long ordeal began on Aug. 6, 2013, when he was intercepted at sea while trying to reach Australia from Indonesia in a smuggler's boat. It was that act of being plucked from the sea, just as he arrived in Australian waters, that inspired his pen name and logo.

"I'm like a fish bone...Gotten from the sea. Eaten and thrown away for so long." 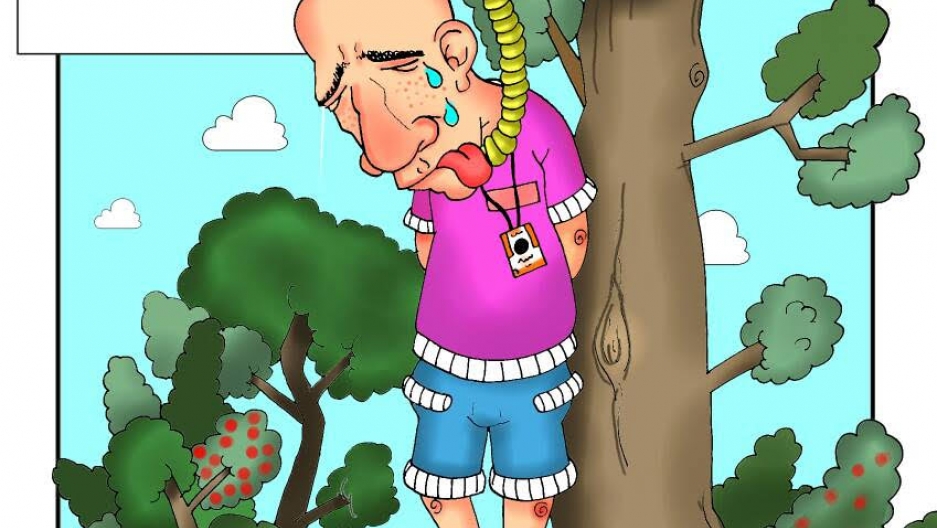 Eventually, Eaten Fish was transferred to the Manus Island detention camp in Papua New Guinea, set up and paid for by Australia. Eaten Fish had the bad luck of arriving in Australian waters just a month after the country instituted a strict policy of denying entry to any asylum-seekers arriving by boat, even for processing.

Ever since, Australia has been widely criticized for the conditions at the Manus Island camp and the United Nations has declared the country's policy of indefinite detention at the offshore camp  "cruel, inhuman and degrading punishment." 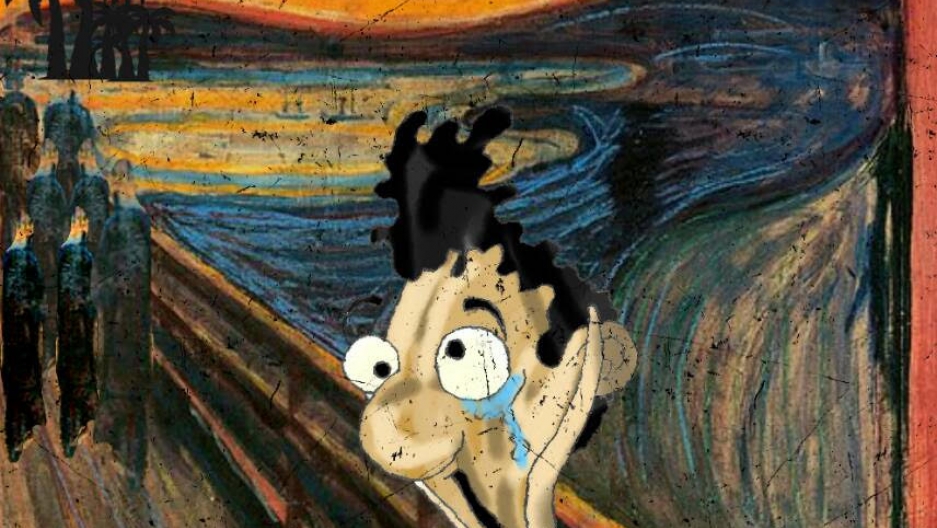 Eaten Fish does his own take on Edvard Munch's The Scream, setting it in his home for the last four years, the Manus Island detention camp in Papua New Guinea.

Eaten Fish says life at the detention camp was problematic from the start. He suffers from severe Obsessive Compulsive Disorder (OCD),  and says he was harassed and sexually abused while at the Manus camp. Years went by. In February 2016, the cartoonist went on a hunger strike for 19 days before being persuaded to start eating again. After that, he was put in isolation at the Manus Island camp.

In August 2017, he was moved to Port Moresby, the capital of Papua New Guinea — for medical treatment and housed in a hotel with other refugees — where he remained until ICORN's sponsorship finally freed him.

In the end, it was arguably social media that saved him. Detainees at Manus Island had some access to the Internet and many eventually acquired smartphones. In 2014, while online, Eaten Fish learned about an art exhibition being planned in Australia to protest the country's policy toward asylum-seekers. It would feature art and poetry by people in the country's offshore immigration detention system. The exhibit was called "Our Beautiful Names" because detainees are called by their number, not their name.

Eaten Fish sent in some cartoons via Facebook and it reached the organizer, Australian activist and poet Janet Galbraith. 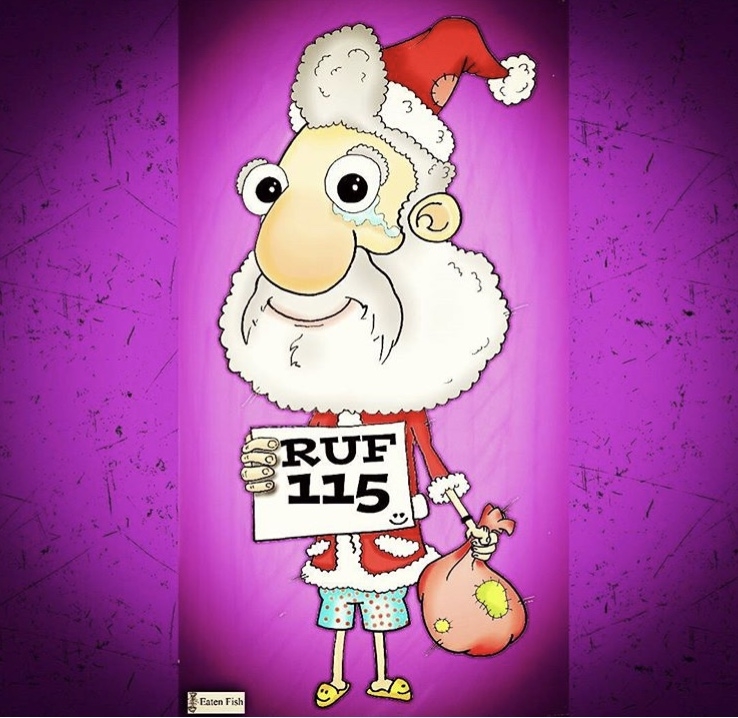 RUF115 was the number Eaten Fish was given when he arrived at Australia's Manus Island immigration detention camp in Papua New Guinea in 2014.

Galbraith responded and took up Eaten Fish's case. She started communicating with him constantly via WhatsApp and the occasional phone call; she also publicized his plight, staged protests and pressured the Australian government to end its policy of offshore detention. She also traveled to Manus Island, often, to try to speak with Eaten Fish. "I visited Manus many times," she told me in a Facebook message, "but Ali was either not allowed to leave the prison camp or — as was the case the last time — was too afraid to leave isolation." 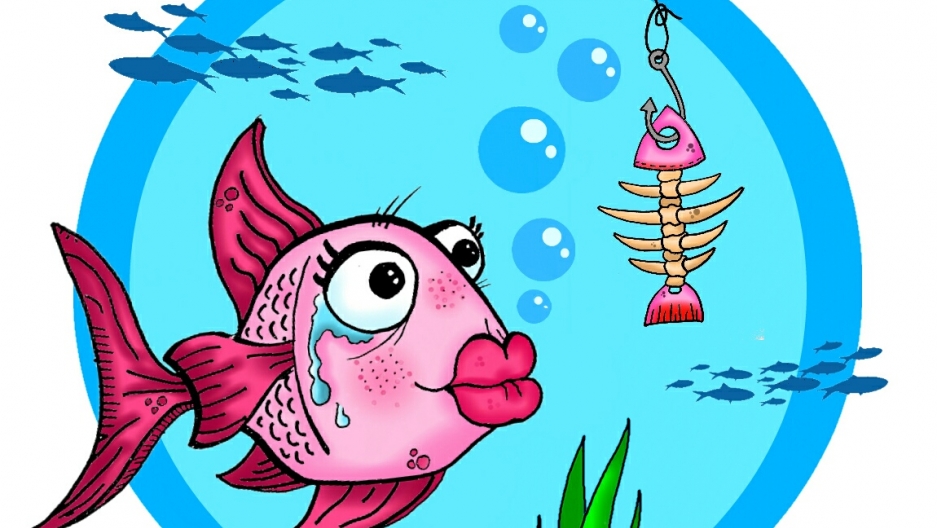 Galbraith's online activism about Eaten Fish eventually reached Australian cartoonist Andrew Marlton, who became another WhatsApp pen pal. Marlton, who goes by the pen name "First Dog on the Moon," became both a friend and artistic mentor to the budding cartoonist. Eaten Fish would respond with cartoons that showed the stark, depressing conditions at the Manus Island Camp. 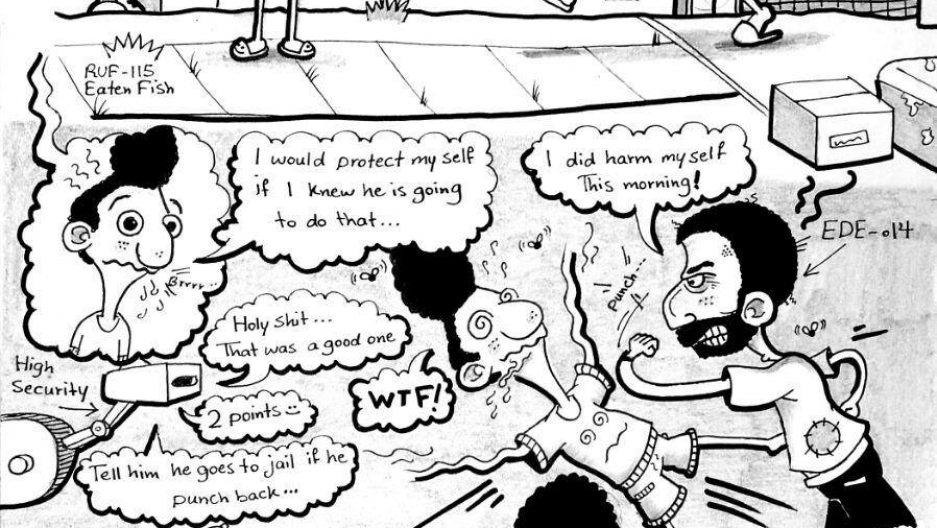 Eaten Fish says he was beaten and sexually harassed during his detention at the Manus Island detention camp. Eventually, he was placed in isolation at the camp and in August 2017 was  moved to Port Moresby, Papua New Guinea for medical treatment.

Marlton started a website about his relationship with Eaten Fish and encouraged other Australian cartoonists to draw in support of the Iranian cartoonist. The response was immediate.

Eaten Fish says he was beaten and sexually harassed during his detention at the Manus Island detention camp. Eventually, he was placed in isolation at the camp and in August 2017 was  moved to Port Moresby, Papua New Guinea for medical treatment.

Marlton used his position as a cartoonist for the Guardian's Australia edition to draw attention to the case of Eaten Fish and the offshore detention camps. In July 2016, he drew a multi-panel cartoon about what daily life at the camp was like for Eaten Fish.

After I heard about Eaten Fish, I started my own WhatsApp correspondence with him.

In 2016 the human rights group Cartoonists Rights Network International (CRNI) got involved after learning about Eaten Fish through one of its board members. Cartoonist Nikahang Kowsar, a CRNI member who had fled Iran 2003 with the help of CRNI and the Association of Canadian Editorial Cartoonists (since renamed the Association of Canadian Cartoonists) started messaging Eaten Fish in Farsi. They used Telegram, a messaging app popular among Iranians because of its strong emphasis on privacy protection for its users.  Sometimes the two would message back and forth for hours at a stretch. Other times they wouldn't talk for weeks. 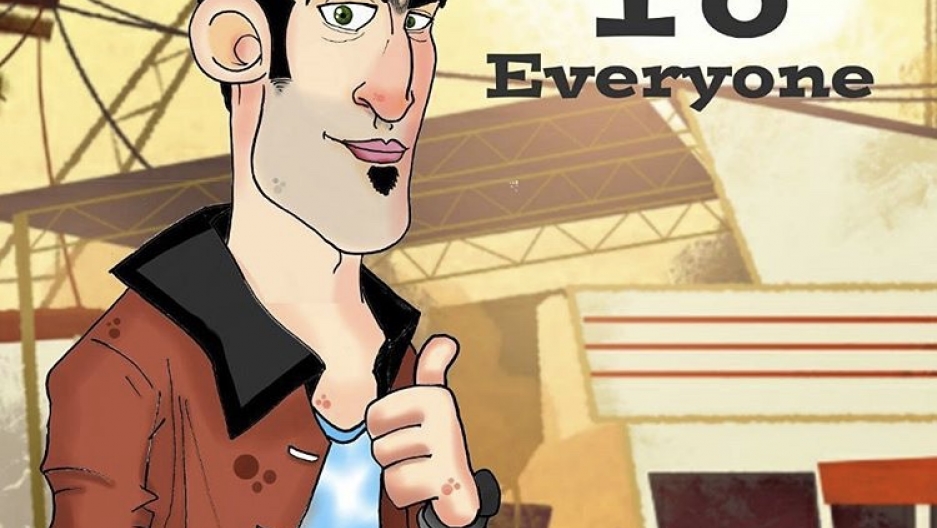 Eaten Fish, who is Iranian, celebrates Nowruz, the Persian New Year, against the backdrop of detention on a remote Pacific island.

"He used to send me cartoons and pictures," says Kowsar. "There were times when I was really worried about him, that he would harm himself. He's a talented person and he's a very sensitive person."

Later that year, CRNI chose Eaten Fish for its annual Courage in Editorial Cartooning Award. Eaten Fish received the award via Telegram message app from Kowsar during the annual convention of the American Association of Editorial Cartoonists (AAEC). Kowsar encouraged the roomful of satirists to draw cartoons in support of Eaten Fish and post them online. 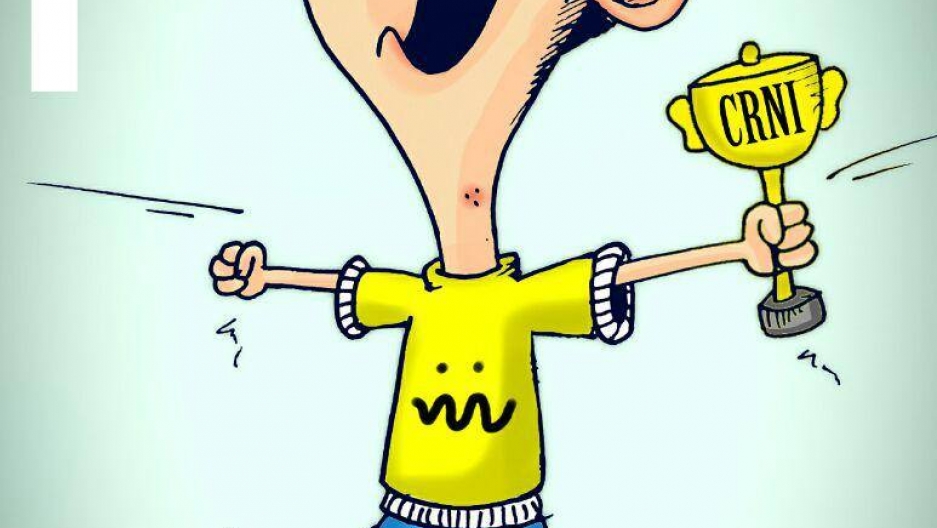 Just about the same time, a British cartoonists' organization, Procartoonists.org came up with the idea of getting cartoonists to send them a fish via social media using the hashtag #AddAFish. Hundreds of cartoonists around the world got involved, drawing fishes in support of of Eaten Fish. Procartoonists.org collected them all and shaped the into a shoal which they exhibited in the UK. They also displayed it at a protest in London outside the Australian Embassy.

Eventually the human rights group CRNI connected Galbraith to ICORN which over the years has helped provide refuge to several persecuted cartoonists around the globe. CRNI helped the case along by pursuing diplomatic connections in Washington which got them a meeting with the Australian embassy. Finally, on December 16th,  Galbraith got the chance to meet Eaten Fish in person when she showed up in Port Morsbey to accompany him on his flight to Norway.

In an email, Galbraith said she was "very very pleased that Eaten Fish has been freed after all these years. "t was wonderful to finally be able to hug each other and it was a privilege to be able to do this knowing that he was now moving toward freedom." But Galbraith said the moment is also bittersweet. "Sweet because Eaten Fish is now free and safe, and bitter because so many other people remain hostage to the state of Australia and its policies in off-shore prison camps."

When Andrew Marlton learned that Eaten Fish had arrived in Norway, he celebrated by drawing another multi-panel cartoon.

the final cartoon for 2017 is sort of a happy ending and isn’t that nice for a change https://t.co/ST1rJTAn5G

As an ICORN "city of refuge," Stavanger, Norway will provide Eaten Fish with an apartment, a monthly stipend and comprehensive medical and psychological help. Marlton told Radio New Zealand that Eaten Fish will need all the help he can get. "He's very broken because of his experience. He's very unwell."

Kowsar says is hopeful. One of the first messages he received from Eaten Fish after he arrived in Norway was encouraging. "He said he was able to buy a Doogh, " a carbonated yogurt drink popular in Iran. "That showed me he was very happy."

Good news today! #eatenfish has been relocated to Europe! Here’s one more for the #AddAFish shoal and I wish Ali much happiness in his new home!!! #manus pic.twitter.com/6d3rOQg00u