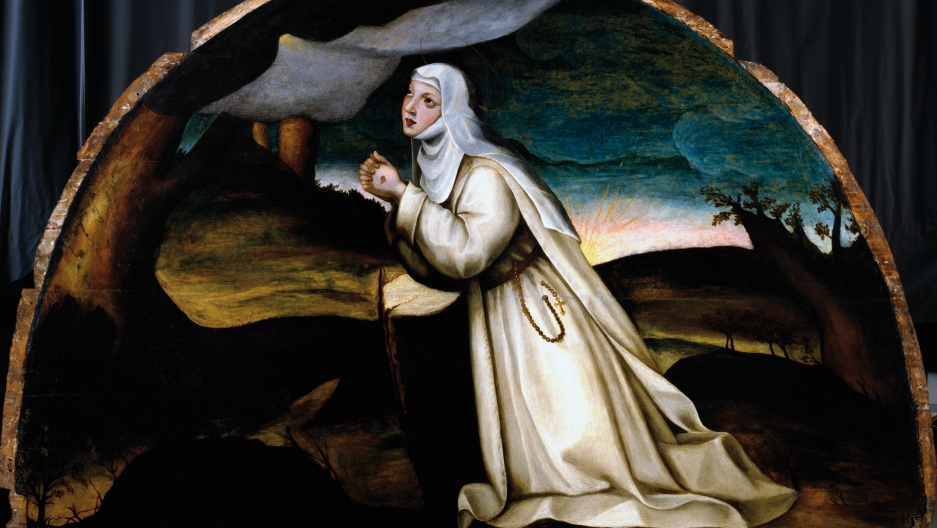 "Saint Catherine in Prayer," by the 16th century painter Plautilla Nelli, was restored in 2008. Nelli was featured in 2017 as part of the Uffizi's new focus on women artists of the past.

When it comes to art, the term “Old Master” is with us for a reason: For centuries it’s been the male artists who have attracted the interest of art historians. Great collectors and museums have paid scant attention to the existence of talented women artists from periods such as the Italian Renaissance.

But the landscape is changing, and nowhere more noticeably than in Florence, the city known as the “cradle of the Renaissance.” This past summer one of its most famous museums, the Uffizi, kicked off a series of exhibitions dedicated to the work of women artists from the past.

Eike Schmidt, who became the Uffizi’s director in 2015 after a stint at the Minneapolis Institute of Art, says he drew inspiration from the Guerilla Girls, a group of feminist art activists, who told him that many museums have the works of women artists, but they're kept in storage.

More about the Guerrilla Girls: They've spent 30 years fighting for diversity in the arts — in gorilla masks

Schmidt says once he got to the Uffizi, he discovered “that we are the museum with the largest collection of works of arts by women before the 19th century.”

Schmidt says he set to work getting as many of these paintings out of storage as possible, including a large collection of self-portraits by women. This year the Uffizi also held the first in what will be a series of annual exhibitions devoted to women artists of the past. The event will open every year on March 8 to coincide with International Women’s Day.

But it is not just the Uffizi looking to change perspectives on art from the past. The Advancing Women Artists Foundation was founded in Florence ten years ago by Jane Fortune, an art lover and philanthropist from Indiana who's author of the book, “Invisible Women: Forgotten Artists of Florence.” The foundation focuses on recovering and rescuing the works of women artists from the past, restoring and conserving these works and — wherever possible — funding their exhibition.

Over the past 10 years, AWA has funded the restoration of more than 40 works. But Linda Falcone, the AWA’s director, says that when they initially approached museum curators to talk about restoration, the first question they always heard was, "Why?”

“Too often women artists have been forgotten by history,” Falcone says. “Women artists in their time were very successful. They usually enjoyed huge renown from their contemporaries and that’s something we forget. In order to exist as a professional, women artists had to be a success in their era.”

One such artist was Plautilla Nelli, the first to be featured at the Uffizi in the summer of 2017. Nelli was a 16th century painter, a nun who was as ambitious as her male contemporaries.

Falcone says that Nelli was an exceptional artist in a number of ways. She had her own workshop where she trained other women. She also did large-scale paintings. “And that’s an important issue to look at because most women artists of the 1500s were doing small-scale works. Then you have Nelli who was doing enormous biblical paintings, like "The Last Supper." Twenty-one feet long. It’s a huge work.”

Falcone also points out that Nelli had no choice but to be self-taught.

“You have to consider a context in which women artists were not able to study,” she says. “They couldn’t frequent academies as fully fledged members. They couldn’t study anatomy. And they couldn’t issue invoices for their works.” It was illegal for women to participate in professional organizations (guilds), Falcone says, so they could not exchange services for money.

For those who might question whether women artists merit a special exhibition, Eike Schmidt at the Uffizi is quick to note that it’s not just about exhibiting the works of women.

“It’s more an occasion to bring them back into art history,” Schmidt says.

He adds that the paintings by women now coming out of storage are not being displayed in a separate space. “We don’t create a feminine ghetto or anything like that,” he says.

Schmidt says he’s pleased with the response from the visitors who have waited in long lines to get into the museum, noting that once they arrive in the rooms with the newly exhibited paintings, they linger. And he adds with a laugh, that in a sure sign of 21st century success, they also stop — “and take selfies.”