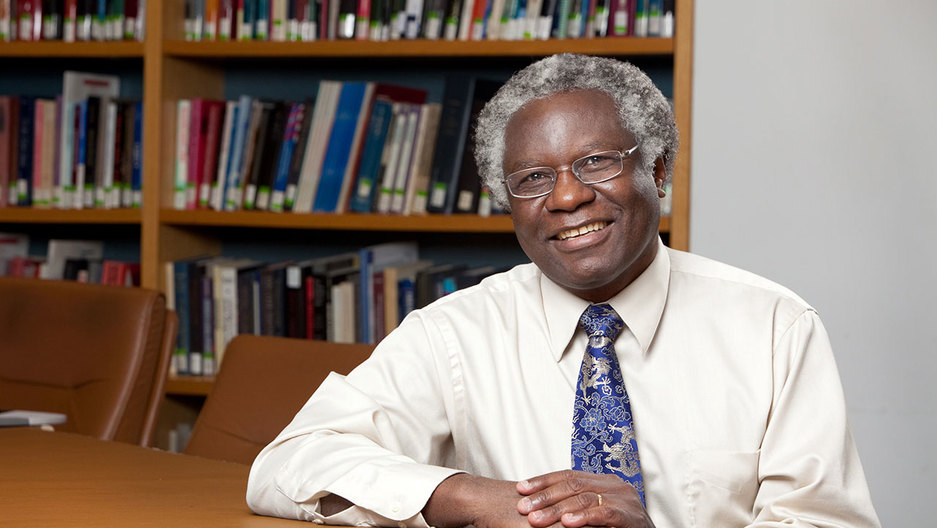 Calestous Juma advocated for technological innovations in developing countries and advised the UN, former President Barack Obama and other governments on policy issues. He died in December at 64.

The Kenya-born Harvard scholar Calestous Juma saw innovations and opportunities bubbling up in African economies where others saw only poverty and despair.

Juma, who died this month in his Cambridge, Massachusetts, home, directed the Belfer Center’s Science, Technology and Globalization Project at the Harvard Kennedy School and spent his life advocating for new technologies in the developing world. He was 64.

A consummate storyteller, he liked to begin university lectures with a slide showing scrawny goats grazing in the Somali bush. The goats sported big, hand-painted numbers scrawled on their ribs.

“The [Somali] owners of the goats write their mobile phone numbers on their goats,” Juma explained in a video from a 2015 lecture at Boston University. “So if you like the goat, you actually send the money to the owner straight away, and then you go and collect the goat. Or if the goat gets lost, you read the number and then you just call the owner and say, ‘I’ve got your goat.’ Very practical.”

Juma, himself, was practical, and able to see how to use new tools in new ways.

“Calestous would see the potential in technological breakthroughs and connect the dots to translate its use in areas where it had not been connected,” remembers Harvard history professor Emmanuel Akyeampong. “That was Calestous’ genius.”

Akyeampong says Juma was among the first to ask how Kenyans could turn their cell phones into a revolutionary banking tool, using a local mobile phone-based money transfer service called "M-Pesa."

The innovation would spread across the continent, reaching hundreds of millions of people who didn’t have access to a bank account. It was just one way Juma saw how latecomers to technology could outpace front-runners.

He advocated for this sort of “leapfrogging” in anecdotes he shared with his students.

“Calestous was full of stories,” Akyeampong says. “To grow up in rural Africa is to be a storyteller and no one told stories the way Calestous did. It was not just stories about his life. When Calestous gave a lecture [his brilliance was] where he got his images, and his animation and his illustrations. It was a delight to see Calestous’ brain at work.”

Juma championed technology and innovation in Africa and beyond. He advised African heads of state and founded the first all-African think tank on sustainable development. He wrote the influential book, "The Gene Hunters," which helped to create the UN’s Convention on Biological Diversity. He then served as its first director.

“He was fond of making the argument that the world's biodiversity is a vast genetic library in which we have not yet even catalogued most of the books — never mind read — and are nonetheless engaged in burning down the library, wing by wing,” says John Holdren, senior adviser to former President Barack Obama on science and technology. “Juma did it in Africa, he did it in the United States, he did it in the United Nations.”

The rural Kenyan town near Lake Victoria, where Calestous grew up in a family with 13 siblings, wasn't on the cutting edge. In fact, just getting there was a feat.

“The village had one dirt road in, one dirt road out,” says Ken Kobe, a Peace Corps volunteer who taught in Juma's local school in the 1950s. “It was the farthest, most western point in Kenya, 80 miles from the nearest town of any consequence. No electricity, no running water, mostly mud housing, a few that had tin roofs. But my memory of it is a place where family was paramount, where an appreciation for the value of education was very much appreciated.”

Kobe remembers Juma as a stellar student, who entertained classmates with impressions of his teacher’s American accent. Juma became a teacher himself, and then a science journalist for Kenya’s leading newspaper, The Daily Nation.

Juma earned a scholarship to the University of Sussex in England, where he received a doctorate in science and technology policy studies. At Sussex, he met his wife, Alison Field, then a graduate student.

Juma will be buried in January after a state funeral in Port Victoria, Kenya. He is survived by his wife, Alison, and a son, Eric, of Cambridge, Massachusetts.