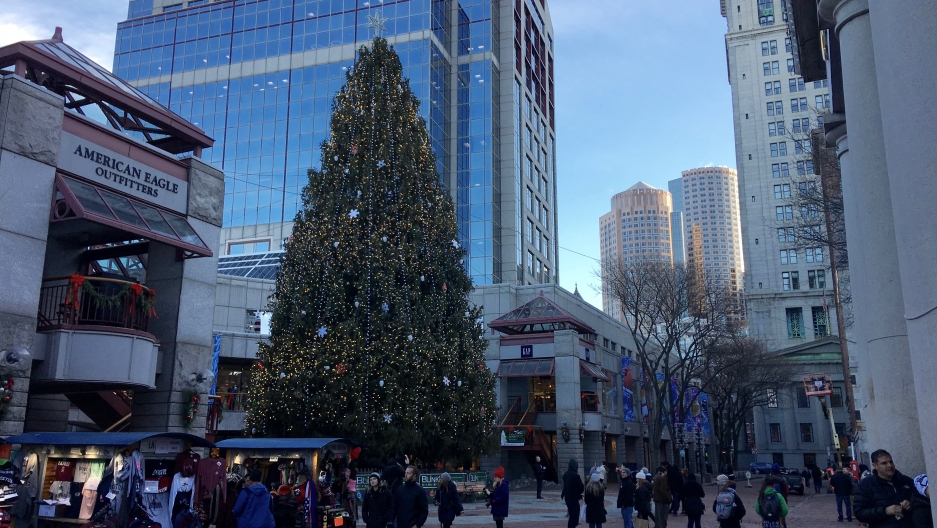 The Christmas tree at Faneuil Hall marketplace in downtown Boston is from Long Island, New York. But is it a religious symbol? Many people say, not really.

There’s nothing overtly religious about the giant Christmas tree at Faneuil Hall Marketplace in downtown Boston. It’s got lots of lights and generic holiday ornaments.

But don’t call it a “holiday tree.”

Back in 2005, the city did just that. The intention was to remove any potentially offensive religious connotations contained in the name “Christmas tree.”

On a sunny but crisp afternoon in the lead-up to Christmas 2017, people stopped to have a look or snap a selfie in front of the marketplace Christmas tree. And when asked if they saw religious meaning in the 80-plus-foot-tall tree, most of them said, not really.

Related: Listen to Shirin Jaafari's story about deciding whether she wanted to buy her own Christmas tree.

“When I see a Christmas tree, it’s all about the festivity,” says Jyothi Davuluri of Shrewsbury, Massachusetts. Davuluri says, as a Hindu, she doesn’t attach any real religious meaning to the Christmas tree. But she says she still has one at her home with presents underneath it for the kids.

“I may not have the [same] religious background, but I still see Christmas trees as such a nice, festive thing and I want to continue for my kids,” Davuluri says with a smile.

Many Christians say something similar. Yes, the Christmas tree has some connection with their religion, but they don’t really see it primarily as a religious symbol.

One exception at the Boston marketplace is Karen Rasmussan, in town from Denmark to visit her daughter.

“It reminds me of when I was younger. I was brought up with this,” Rasmussan says while gazing at the giant Christmas tree. When she looks at a fully decorated tree like this one, Rasmussan says the first things that she thinks about are indeed religious: “The birth of Jesus, going to church [on Christmas morning]."

More broadly, she says she thinks about what it means to be a Christian.

The thing about Christmas trees is, if you look at their long history, there’s a great deal of religious significance attached to them.

Kerry Noonan is an expert in folklore and mythology at Champlain College in Burlington, Vermont. And she has a Christmas tree at home too.

“I do see it as religious, but not in what we call a theological sense, but in a folk religious sense. Folk religion is all those beliefs and practices that exist alongside of the official religion,” Noonan says.

So, where do Christmas trees come from?

Noonan says there is one popular legend about Martin Luther coming up with the idea after gazing through an evergreen tree at night and seeing the stars twinkling through its branches.

But historically speaking, Noonan says there is evidence of Christmas trees from at least the early 1500s in Germany. Some experts think the practice came from Finland, she says, and then spread to other parts of Europe.

“However, the Romans, during Saturnalia brought in leafy greens and boughs and decorated their homes. Saturnalia was their mid-winter festival,” Noonan says. There is also evidence of pre-Christian pagans in Europe who worshipped trees, “and worshipping their deities within groves.”

Noonan says the functional side of all this is compelling too. It makes good sense, she says, “If you’re in pre-modern Europe, in an agricultural society, you’re not doing much on the farm this time of year, it’s cold and it’s dark and everything is white [with snow]. So, you really appreciate those trees that are evergreen.”

“They remind you that winter is not going to last forever, and they cheer everything up.”

And that’s also why, many devout Christians would say, the Christmas tree makes such a perfect symbol for Jesus Christ.

“We see it as a Christian symbol first, and you learn that it wasn’t always a Christian symbol later in life,” says Father James Bretzke, a professor of moral theology at Boston College. “It might have been pagan, but now is Christian. That doesn’t cause me any distress.”

“I don’t think any Biblical scholar today would say that Jesus Christ was born on Dec. 25,” Bretzke says.

However, the parallels with Jesus as a sign of hope and light are clear, he says. And that is one reason why the early Catholic Church decided to adopt the winter solstice as the birthday of Jesus many centuries ago.

Bretzke, who is 65 and grew up in a Catholic community outside Milwaukee, says he can’t remember there never being a Christmas tree at church. The only controversy stirred up over trees, he says, came when someone suggested that his parish get an artificial tree instead of a fresh-cut one. Some people in the congregation took issue with that.