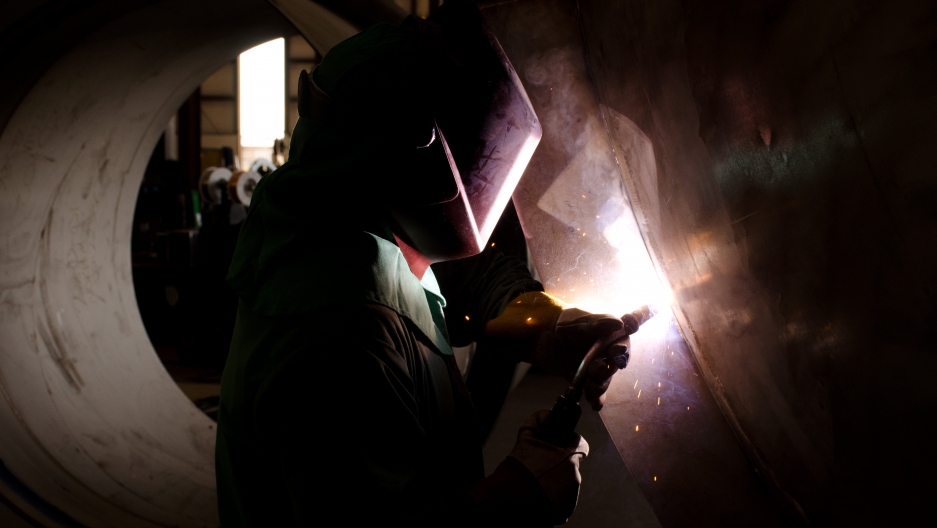 A welder at CAID Industries. Business has slowed this year at the Tucson, AZ company with uncertainty surrounding the future of NAFTA.

Arizona needs Mexico. Unlike the United States as a whole, Arizona actually has a trade surplus with its southern neighbor.

At CAID Industries’ factory in Tucson, welders build massive tanks and steel silos used by mining and oil and gas companies. Setting up shop here, just 70 miles from the border, wasn’t by chance.

“Mexico is naturally a resource-rich country and we support a lot of mining companies. And so, by being in Arizona, we have a close proximity to those customers,” says Rob Assenmacher, president of CAID Industries.

He says since NAFTA came into effect 23 years ago, business has boomed.

“I can tell you that — this is going to be a little off the cuff — but I believe in the early '90s, we were around $6 million to $8 million in revenue. And so now we’re closer to $60 million,” says Assenmacher.

He can’t attribute that 10-fold increase directly to NAFTA. But Assenmacher will say this about his Mexican customers this year: “I can say that since there’s been an uncertainty in NAFTA, our business, mainly this year in 2017, has decreased.”

Less revenue means fewer jobs. For the state as a whole, The US Chamber of Commerce estimates that 236,000 Arizona jobs would be at risk if the US withdraws from NAFTA. (Arguably a high estimate.)

Donald Trump got elected in no small part because of his disdain for trade deals. He often called NAFTA the worst trade deal ever and vowed to rip up or fix the 23-year-old agreement. Negotiators from the US, Canada and Mexico have been working for months to hammer out a new deal. All the while, President Trump continually threatens to walk away from the table.

This situation has Arizona’s political leaders, from both parties, quite concerned. The state’s Republican governor, Doug Ducey, regularly touts the benefits of NAFTA and has been meeting with Mexican officials to strengthen business connections.

Stanton says Arizona’s image took a hit after the state passed its controversial law SB 1070 seven years ago. That required police officers to demand proof of legal status from people they stopped who they suspected of being unauthorized. Stanton says they’d been repairing fractured relations with their southern neighbor; then President Trump burst on the scene.

“For us, it’s like here we go again,” says Stanton. “We had worked so hard to overcome past political mistakes made here in Arizona, to overcome that to build a stronger economic relationship with Mexico. And now, not at a local level, not at a state level, but at a federal level, we’re facing immense threats to this improved relationship.

“Make no mistake, these are high-wage jobs that are associated with trade with Mexico and if NAFTA were blown up in the way that the president has threatened to do, that would really, really hurt us here locally.”

Stanton says President Trump is clinging to an old economic model: “Things are made in one country and then are shipped across the border and sold in another country.

“The truth is that for so many — either electronics, or automotive parts, or aviation parts — those products cross the border multiple times before they are finished. That’s the modern international economy.”

“The cars that would be developed would cross that border like eight or nine times before they are completed,” says Stanton “Those are great jobs here in Arizona, and without an effective NAFTA, that goes away.”

Lucid Motors’ chief technology officer, Peter Rawlinson, says they considered more than 60 locations for their factory but chose Arizona for its business-friendly climate and the ability to trade freely with nearby Mexico. Is he worried about NAFTA being altered or ripped up?

Rawlinson said there would have to be a “very severe” change for Lucid to re-think its entire business model in Arizona. In other words, it depends on what trade negotiators come up with. Or what a world without NAFTA would mean for a border state.

“We’ve never backed out of a trade agreement in this country before, so we would be in unchartered territory,” says Erik Lee, director of the North American Research Partnership, based in Phoenix.

Lee says if NAFTA is canceled, expect years of litigation. Tariffs could rise and trusted trade programs could be hampered.

Now, all of this isn’t to say that re-opening NAFTA was a foolish move. Lee, and most everyone, agrees that the 23-year-old trade deal could benefit from some updating. And Lee has faith in trade negotiators to get there.

“I think the wild card, and I don’t think there’s any secret of this, the wildcard is Donald Trump,” says Lee. “At any point along the way, no matter how far the US, Mexico and Canada are down the road of renegotiating this agreement, he could come into the picture and complicate things.”

And of course, Arizona’s business leaders aren’t the only ones concerned about NAFTA renegotiations. Workers are too.

I spoke with Dawn Schumann, the special projects coordinator with the Teamsters Local 104 in Phoenix, at the local union hall in Phoenix, where she sat under a photo of the Teamster’s general president James Hoffa taken about 25 years ago.

Schumann argues what many labor leaders do: NAFTA is hollowing out the middle class and increasing income inequality in the United States.

It’s made for unlikely allies. Today, union leaders, who traditionally support Democrats, are supporting the Republican president’s push to renegotiate the treaty.

Schumann then rolled her eyes and whispered: “That’s all I want to say about him.”

It’s a complicated trade deal, a complicated renegotiation, and a complicated man at the center of it all. Add it all up, for a border state that relies heavily on trade with Mexico, anxiety is high. 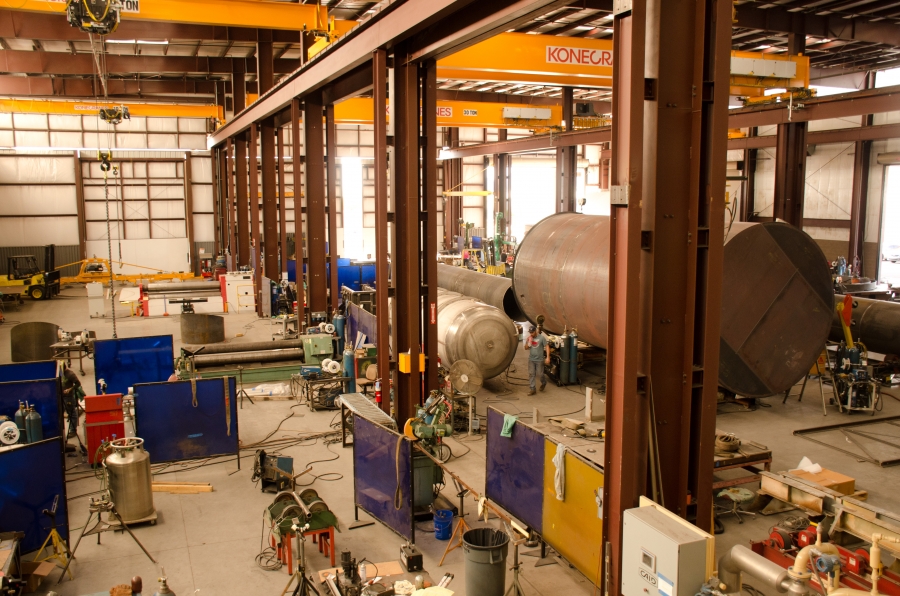 Heavy manufacturing is a major economic driver in the Arizona-Sonora, Mexico border region. Proximity to customers allows CAID Industries to export heavy machinery to Mexico from its Tucson facility at a fraction of the transport cost.