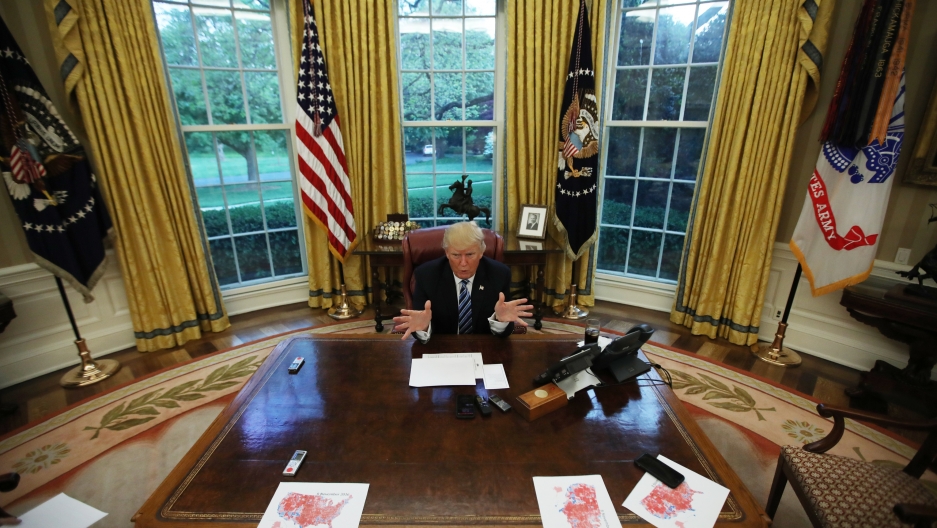 US President Donald Trump speaks during an interview with Reuters in the Oval Office of the White House in Washington, April 27, 2017.

We live in confusing times in America and around the world. But President Donald Trump’s new national security strategy (NSS) could leave US allies and adversaries more confused than ever.

While the strategy document itself champions diplomacy, international institutions and even includes a nod toward nation-building, the president has been consistent in his criticism of all three. As a result, Trump’s rollout on Monday made his administration look more chaotic and inconsistent than ever.

Trump presented the strategy with a speech in the tradition of "Glengarry Glen Ross’" advice: “Always be closing.” The campaign-like speech called out past administrations for their “disastrous” policies and doubled down on Trump’s campaign agenda — which might be fine if the document followed suit. But oddly, despite the occasional “America first” Trumpism, the document reads like it could be from another administration entirely.

The document pledges to combat the spread of weapons of mass destruction, defeat terrorists, strengthen cyber capabilities and promote “American prosperity.” None of these are controversial — who could be against American prosperity or the defeat of terrorism? In fact, as a result, these aims don’t sound like much of a departure from the Obama administration.

But the similarities end there. The document departs from Obama’s strategy of cautious embrace of countries like China and Iran, pursuing a more adversarial track. It also departs from the Obama administration’s classification of climate change as a national security threat — consistent with the president’s decision to pull out of the Paris Climate Accords.

More concerning, though, are apparent internal inconsistencies between Trump and his team.

While the document states that “We must upgrade our diplomatic capabilities,” the Trump administration has proposed a 30 percent cut to diplomatic funding. Moreover, the president has repeatedly discouraged Secretary of State Rex Tillerson’s diplomatic overtures to North Korea, tweeting in October that Tillerson was “wasting his time.”

The document also praises international institutions. But in his speech, Trump repeats his claim that “countries that are immensely wealthy should reimburse the United States for the cost of defending them.” Never mind that this isn’t actually how NATO works; Trump’s statement is consistent with his repeated criticism of the alliance and inconsistent with the NSS.

But we don’t have to dig far to find these contradictions. Trump railed against the idea of nation-building even in the moments after the strategy was released, tweeting: “The train accident that just occurred in DuPont, WA shows more than ever why our soon to be submitted infrastructure plan must be approved quickly. Seven trillion dollars spent in the Middle East while our roads, bridges, tunnels, railways (and more) crumble! Not for long!”

And finally, there’s Trump’s treatment of Russia and China. The document refers to the two countries dozens of times, and at one point goes so far as to call them “adversaries” that must be countered. Trump, however, referenced Russia and China just once in his speech, stating that the US “will attempt to build a great partnership” with these countries, which “seek to challenge American influence, values and wealth.” This more forgiving language is consistent with Trump’s attempts to play both sides of the coin — chastising Russia and China on one side and praising them on the other — but it is not consistent with the strategy laid out in the document.

And, there’s the rub.

Save for those who would support Nixon’s imperfect “madman theory” of diplomacy, which lends credence to the idea of appearing irrational or volatile, there isn’t much reason to assume that confusing our allies and adversaries is a good thing. The US is stronger (and safer) when its leaders can articulate a coherent path forward. So far, the Trump administration has failed to do just that.

Laicie Heeley is editor of the online foreign policy magazine Inkstick and host of a new podcast from PRI, "Things That Go Boom." Listen to the trailer and subscribe wherever you get your podcasts today.