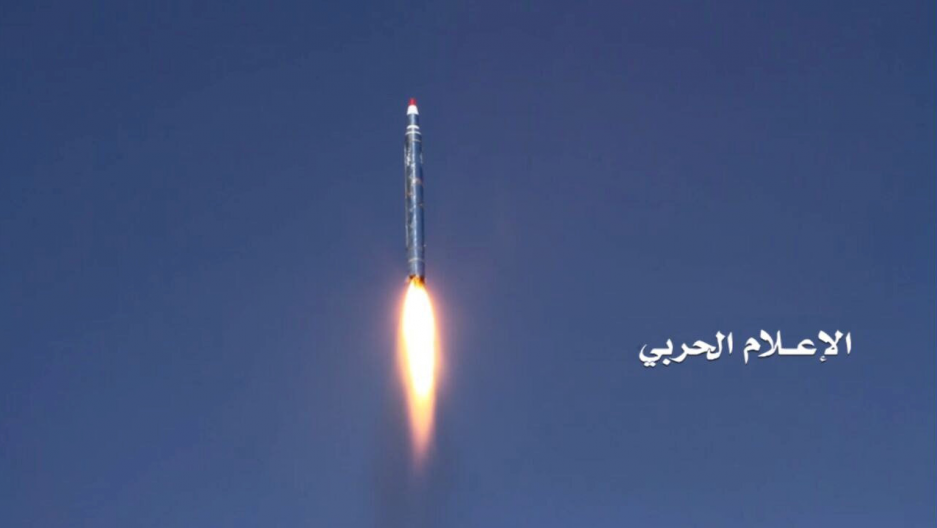 A ballistic missile is seen after it was fired toward the Saudi capital of Riyadh from an undisclosed location in Yemen, in this handout photo released Dec. 19, 2017 by the Houthi movement's War Media.

Saudi air defenses shot down a ballistic missile fired by Yemen's Houthi group toward Riyadh on Tuesday, the Saudi-led coalition said, in an attack that could escalate a proxy war between the kingdom and Iran.

There were no reports of casualties or damage. In contrast, a UN human rights spokesman said coalition air strikes had killed at least 136 non-combatants in war-torn Yemen since Dec. 6.

The Iran-aligned Houthi movement said it had aimed the missile at the Saudi royal court at al-Yamama palace, where a meeting of Saudi leaders was underway. It described the attack as a new chapter in the conflict.

The Saudi-led coalition said the missile, the latest of several fired toward Riyadh, had been directed at residential areas and there had been no damage.

Quoting a statement from the coalition, Saudi state news agency SPA said Iranian-made missiles were a threat to regional and international security. It accused the Houthis of using humanitarian entry points into Yemen to smuggle in missiles from Saudi Arabia's regional arch-foe Iran.

"Coalition forces confirm intercepting an Iranian-Houthi missile targeting [the] south of Riyadh. There are no reported casualties at this time," the government-run Center for International Communication wrote on its Twitter account.

Saudi palaces, military and oil facilities are within range of such missiles, the Houthis said in a statement carried by the group's Al-Masirah television.

In Washington, a Pentagon spokesman said the United States was aware of the reported missile attack.

Thousands of air strikes in Yemen

Saudi Arabia and Iran are locked in a struggle for influence in the Middle East. The conflict in Saudi Arabia's backyard Yemen has killed more than 10,000 people and displaced over two million.

The Houthis, for their part, have fired several missiles at the kingdom but have not caused any serious damage.

The attack came as the Houthis marked 1,000 days since the Saudi-led coalition began military operations in Yemen in March 2015 after the Iran-aligned group drove Yemeni President Abd-Rabbu Mansour Hadi into exile.

"The enemies had their own mirage calculations ... but over 1,000 days, there has been this great steadfastness," said Abdel-Malek al-Houthi, a Houthi leader, in a speech on the group's Al-Masirah TV.

The United Arab Emirates, a close ally of Saudi Arabia and part of its coalition, said the latest Houthi attack underscored the need to keep the military campaign in Yemen going.

"With every Iranian missile fired by the Houthi militia against civilian targets, the necessity of (Operation) Decisive Storm becomes clear," United Arab Emirates minister of state for foreign affairs, Anwar Gargash, wrote on his Twitter account.

Saudi Arabia and its foe Iran are also competing for influence in Iraq and Syria.

Reuters witnesses described hearing a blast and said they saw smoke in the northeast of Riyadh.

Saudi Arabia's Crown Prince, Mohammed bin Salman, has described what Riyadh says is Iran's supply of rockets to the Houthis as "direct military aggression" that could be an act of war.

Iran has denied supplying such weaponry to the Houthis, who have taken over the Yemeni capital Sanaa and other parts of the country during its civil war.

Saudi Arabia said on Nov. 4 it had intercepted a ballistic missile over Riyadh's King Khaled Airport, an attack that led the coalition to close Yemeni ports.

On Nov. 30 Saudi Arabia shot down another missile near its southwestern city of Khamis Mushait.

Last week the United States presented for the first time pieces of what it said were Iranian weapons supplied to the Houthis, describing it as conclusive evidence that Tehran was violating UN resolutions.

The arms included charred remnants of what the Pentagon said was an Iranian-made short-range ballistic missile fired from Yemen in the Nov. 4 attack, as well as a drone and an anti-tank weapon recovered in Yemen by the Saudis.