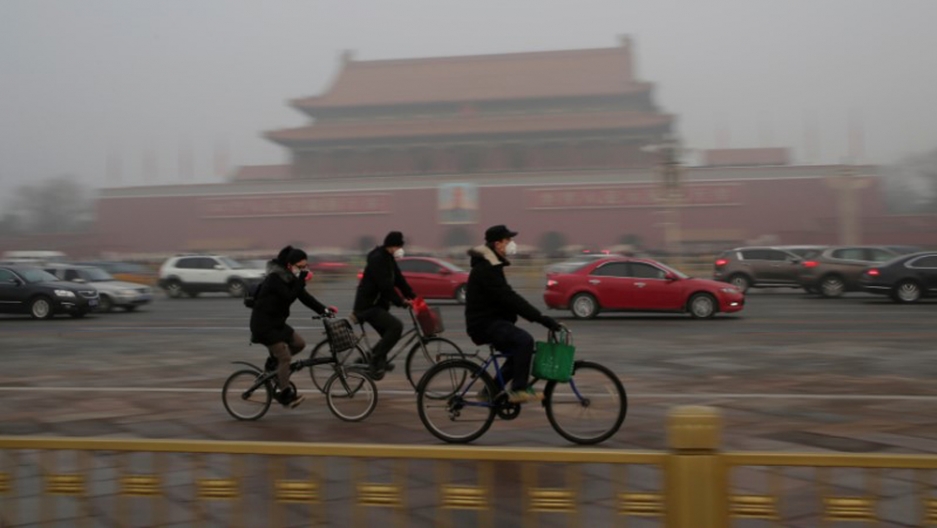 People wearing masks cycle past Tiananmen Gate on a smoggy day after a red alert was issued for heavy air pollution in Beijing, Dec. 20, 2016.

China, the world's biggest polluter, unveiled plans on Tuesday for a nationwide carbon emission trading scheme (ETS). The government outlined details of what is expected to be the world's largest such program.

The State Council approved the scheme last week and the National Development and Reform Commission (NDRC) outlined some details of how it will be implemented, marking its launch, NDRC Vice Chairman Zhang Yong said at a briefing.

Trading will be based in Shanghai, involving 1,700 power companies and over 3 billion tons of carbon dioxide annually, he said.

He did not give a timeline for the start of trading or how permits will be allocated, but experts and analysts say it will take at least a year to put in place mechanisms.

That volume, accounting for a third of China's total carbon emissions, means the scheme will eclipse the European Union's, the world's largest, which is expected to cover about 1.4 billion tonnes of emissions this year.

Launching the scheme is a major step in the world's No. 2 economy's efforts to meet commitments to combat global warming.

China, the world's largest source of greenhouse gases, is aiming to raise the share of non-fossil fuels to 20 percent of its total energy mix by 2020 from 13 percent in 2016. As part of the Paris Agreement in December 2015 it pledged to cap carbon emissions at a peak by around 2030.

"The ETS will push industrial plants to eliminate outdated capacity and improve their production," said Jiang Zhaoli, vice director at the climate change department of the NDRC.

Nine regions and cities, including Jiangsu, Fujian and seven regions where pilot schemes have taken place, will coordinate to establish the ETS system, the NDRC said.

Trump has vowed to withdraw the United States from the Paris climate accord unless changes are made to it.

The news was welcomed by supporters of clean energy.

"With the top global polluter enacting policies to support the Paris Agreement and transition to a low carbon economy, it is clear that we're at a tipping point in the climate crisis," said former US Vice President Al Gore.

Under original plans, eight sectors including iron and steel, chemicals and paper-making will eventually be included in the scheme.

The market-oriented ETS will help companies abate emissions and reduce carbon-intensified assets through the controlled allocation and trading of carbon emission allowances.

"It is important that the world's largest emitter should lead on climate ... China has stepped up its climate leadership dramatically in recent years and is now increasingly seen as filling the leadership void left by the US," said Fred Krupp, president at the US Environmental Defense Fund.

China is not considering linking its ETS with other countries at this stage, said NDRC director Li Gao, adding it will also take time to have a national carbon price.

First mooted in 2016, the launch of carbon trading in China ran into delays as market designers struggled to handle problems like accuracy of emissions data.

By Muyu Xu and Josephine Mason/Reuters