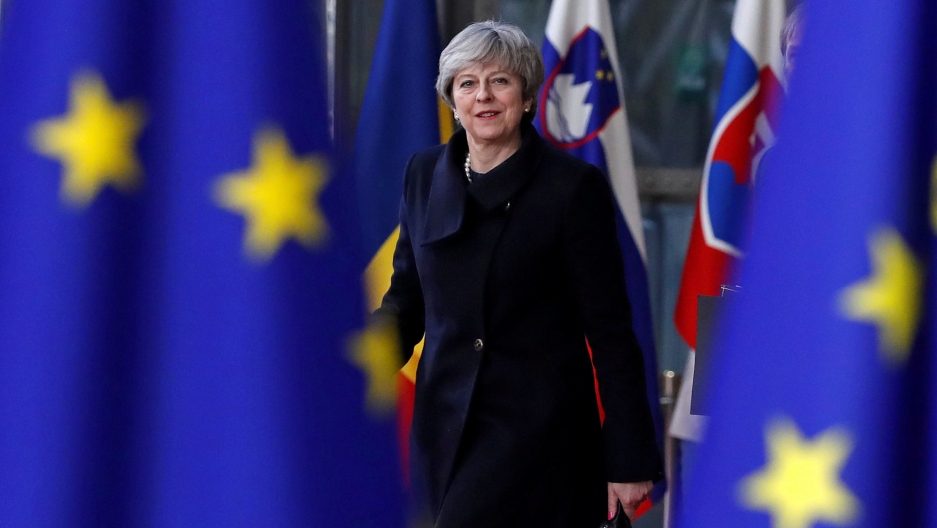 The European Union agreed on Friday to move talks forward with London on Britain's exit from the bloc as leaders warmed to the British premier, but there was little clarity on trade, as well as on some issues already discussed.

On the second day of a Brussels summit, EU leaders agreed "sufficient progress" was made after a deal on citizens' rights, the Irish border and Britain's outstanding payments, giving negotiators a mandate to move on to the main phase of talks.

Discussion of a transition period to calm nerves among businesses is due to start in the new year, although talks on a future free trade pact will not begin until after March — a date underlined by "guidelines" that set out how to proceed as Britain seeks to unravel more than 40 years of membership.

May replied via Twitter, thanking Tusk and European Commission President Jean-Claude Juncker: "Today is an important step on the road to delivering a smooth and orderly Brexit and forging our deep and special future partnership," May said.

"We will deliver on the will of the British people and get the best Brexit deal for our country — securing the greatest possible access to European markets, boosting free trade with countries across the world, and delivering control over our borders, laws and money," she added.

However, the future partnership discussion is set to be difficult, leaders including Juncker and Italy's Prime Minister Paolo Gentiloni warned earlier, as they arrived for the second day of the summit. May had departed the night before.

Austrian Chancellor Christian Kern went further, saying even a primary school student could see that the "first phase" deal on the Irish border would come back to haunt the talks because it was impossible for Britain to leave the bloc's single market while avoiding a hard border on the island of Ireland.

"So our primary school students can see that there is a riddle to be solved."

In more formal language, leaders used the nine-point guidelines they agreed at the summit to support May's call for a two-year transition out of the bloc, which aims to help British business and citizens adjust to life after the European Union.

Leaders reiterated their position that Britain cannot conclude a free-trade accord with the European Union until it has left and become a "third country."

In coded language aimed at ensuring that Britain's departure will not set a precedent for others and further undermine the bloc, leaders also agreed to "ensure a balance of rights and obligations" during Britain's transition period.

Ireland's Prime Minister Leo Varadkar cautioned that there were "quite divergent opinions" on how a new relationship and transition would look. EU officials are unsure exactly how far Britain should continue to receive the full, unfettered economic benefits of EU membership during a transition after it leaves, even if it loses political representation in Brussels.

A day after she suffered a defeat in parliament over her blueprint for quitting the EU, May won applause from her peers on Thursday evening. As she left to return to London, she said she was eager to move on, once her peers give the formal green light to trade talks on Friday.

The EU is willing to start talks next month on a roughly two-year transition period to ease Britain out after March 2019, but has asked for more detail from London on what it wants before it will open trade negotiations from March of next year.

A British government official said the prime minister was approaching the next phase, which will discuss a transition period as well as the terms of the future trading relationship, "with ambition and creativity."

German Chancellor Angela Merkel gave her stamp of approval, but cautioned time was running out.

"We made clear that Theresa May has made an offer that should allow us to say that we have seen sufficient progress," she told reporters. "Nevertheless, there are still a lot of problems to solve. And time is of the essence."

May, weakened after losing her Conservative Party's majority in a June election, has so far carried her divided government and party with her as she negotiated the first phase of talks on how much Britain should pay to leave the EU, the border with Ireland and the status of EU citizens in Britain.

But the next, more decisive phase of the negotiations will further test her authority by exposing the deep rifts among her top team of ministers over what Britain should become after Brexit.

By Philip Blenkinsop and Robin Emmott/Reuters