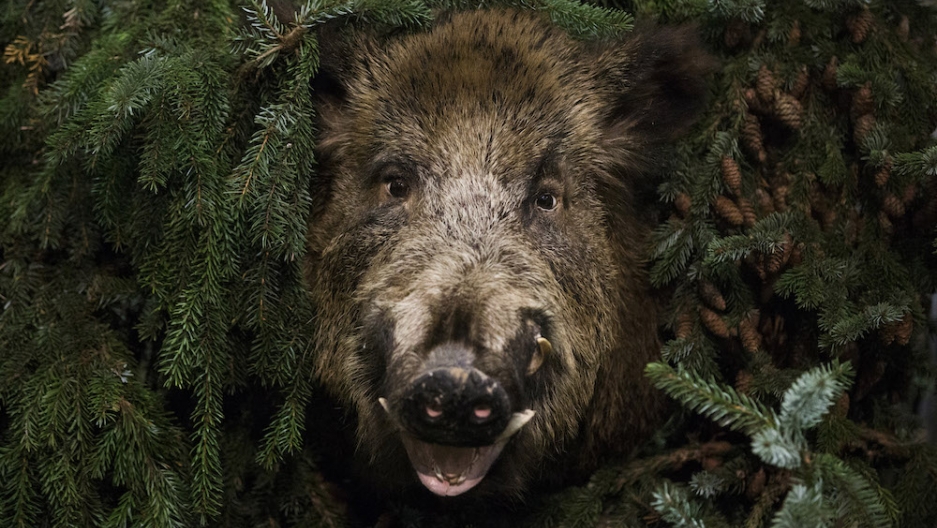 A stuffed boar is seen on display at the pavilion of a German hunting association at the Green Week agricultural fair in Berlin, January 18, 2013.

Share
They have coarse bristles, huge heads with tiny eyes and protruding tusks and, occasionally, a really bad temper.
Thousands of wild boars call Berlin home, where they dig up gardens, cause road accidents and rampage through neighborhoods.
Especially on the outskirts of the leafy German capital, people have had to learn to live with the massive omnivores.
"Many people tell me: wherever I go, I see wild boars," said Derk Ehlert, a Berlin municipal wildlife specialist.
The population is estimated to hover around 3,000, he said, but sightings are becoming more common.
While their numbers have remained steady, their behaviour has "changed enormously," he said.
There are regular reports of joggers and dog-walkers encountering the beasts that can move their bulky bodies at 25 miles an hour.
Wild boars have even been spotted in the very heart of the city, with two animals, possibly injured in road traffic, charging through Berlin's busy Alexanderplatz shopping square.
Daytime sightings are becoming ever more common, said Ehlert, likely because "they are no longer so fearful."

The metropolis, sometimes dubbed the "wild boar capital" by local media, has long been a haven for all kinds of wild animals.
Thousands of foxes prowl its many green spaces, stone martens are known to chew through car cables and raccoons rummage through rubbish bins.
Unlike many big European cities, Berlin also makes for a comfortable home for the hairy ancestors of the domestic pig.
Forests cover 20 percent of greater Berlin, and other green spaces set aside during the 19th century industrial revolution act as wildlife corridors.
Plenty of food can be found in allotment gardens and in a belt of maize and other fields around the once-divided city.
The wild boars have no natural predators, hunting is seasonally restricted, and a series of mild winters has reduced mortality among the offspring.
The number of incidents involving wild boars seems to be on the rise — from road accidents, to a suburban train stoppage caused by a herd, to attacks on dogs and occasionally, humans.
Then there are the countless gardeners who report having their flowers and veggies ransacked by the wild swine.
"We receive calls every day," said Katrin Koch, who runs an information service for the environmental group NABU.
"It's just an unpleasant feeling, this latent fear when a wild boar is around... We dramatise it, we immediately think 'boar equals danger.'"

Pensioner Willi Aigner had no problem with the hairy beasts until one day in August, when he was walking his dog in the Tegel forest, in the city's northwest.
"The wild boar was hiding in the bushes and we were already past it when it suddenly charged," recounted the 73-year-old.
The animal first attacked the dog, which it "disembowelled," and then "it was my turn," he said, showing a picture of a deep cut in his thigh that required several stitches.
The senior and his dog were both saved by a passerby who called emergency services, and a veterinarian saved the dog's life.
The 260-pound wild boar was finally shot dead by a municipal hunter, who alone is licensed to cull the pigs within Berlin city limits.
Such aggressive behavior is rare for wild boars, say experts. They usually only attack humans when wounded or cornered — or in cases where a sow detects a threat to her offspring.
"You have to remember that they are wild animals and treat them with respect," said Milena Stillfried, of the Leibniz Institute for Zoological and Animal Research.
The author of a recent study on wild boar behaviour in the city, Stillfried knows them well — even from the inside, having dissected hundreds of boar stomachs to study their content.
Contrary to popular belief, "they do not rummage for garbage but eat almost exclusively natural foods," she revealed.
Her most surprising find was the discovery of "isolated populations" in three forests of the capital.
This made sense in the west, which was long enclosed by the Berlin Wall, but remained a mystery in the east, she said.
These unique "urban wild boars" have lost their fear of humans and are very good at hiding during annual culls, said Ehlert.
"We won't be able to impact them much with guns," said Koch. "We'll just have to learn to live with these animals."