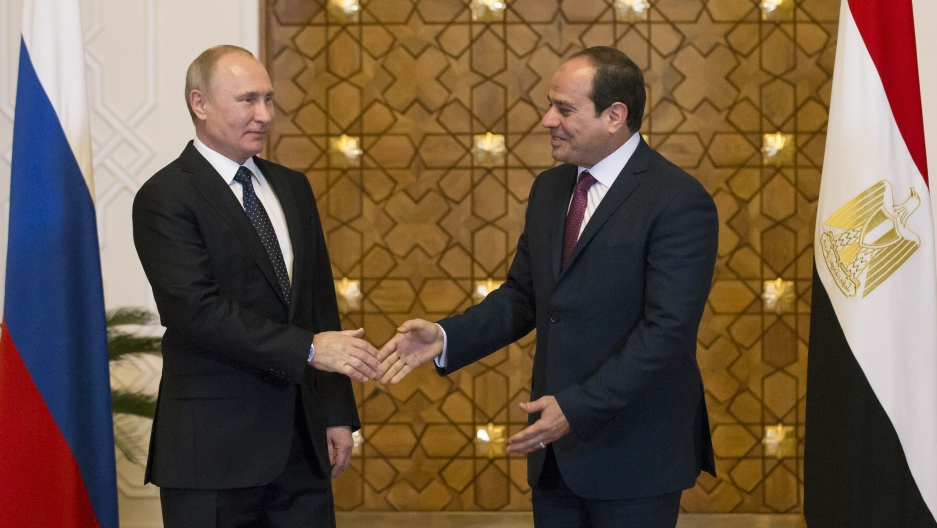 Vladimir Putin conducted a whirlwind tour of the greater Middle East region this week. For some observers, it was a showcase for Russia’s growing influence in the region. According to Ishaan Tharoor, “he exhibited the kind of clever strategic policymaking that the US is simply not doing in the region.”

Tharoor is a foreign affairs writer with the Washington Post and recently wrote “Putin is outplaying Trump in the Middle East.”

“Overall,” says Tharoor, “what you’re seeing is Russia steadily coming in and re-building ties, asserting its influence, being an active player in the region — at a time when the US policy in the Middle East is incredibly inconsistent and incoherent.”

Two years ago, Russia intervened militarily in Syria and contrary to US government and expert opinion, Putin did not find himself in a quagmire. Instead, he rescued his once-failing ally, Bashar al-Assad, and made him once again the most powerful player in the country.

Russia has now inserted itself as a peace broker in Syria. It’s secured a massive energy deal with Egypt and is cooperating with Turkey on a host of issues. Russia is also posing as a champion of other oil producers in protecting prices.

Russia now has a naval base in the Mediterranean in Tartus, a warm-weather port in Syria. It also has an airbase nearby. Now there’s talk of the Russian air force securing basing rights in Egypt. It already has access to an Iranian base.

But this Russian effort in the Middle East is not so much about hard power, says Tharoor. “For Putin,” he explains, “it’s all about domestic optics more than anything else. He has staked his political legitimacy on being this world-historic figure who’s returning Russia to prominence on the world stage.”

The Russians do not seem to have a grand strategy, but they act rather opportunistically. “They’re just playing their cards well,” says Tharoor, “and the US, which has a much greater hand, is not playing that hand that well.”

Russia saw an opportunity when the Obama administration deliberately stepped back from the traditional US role of acting as the policeman in the Middle East. “And then you have a White House now,” says Tharoor, “that is playing all sorts of different cards that don’t all really add up.” He highlights the US involvement in Saudi Arabia’s rivalry with Iran and policies that antagonize Muslims, while the announcement recognizing Jerusalem as the capital of Israel that, Tharoor notes, “is confusing a lot of people and created a whole new round of diplomatic ferment.”

Russia, by contrast, appears as a consistent, reliable and dependable player that has demonstrated a willingness to stand by its friends.