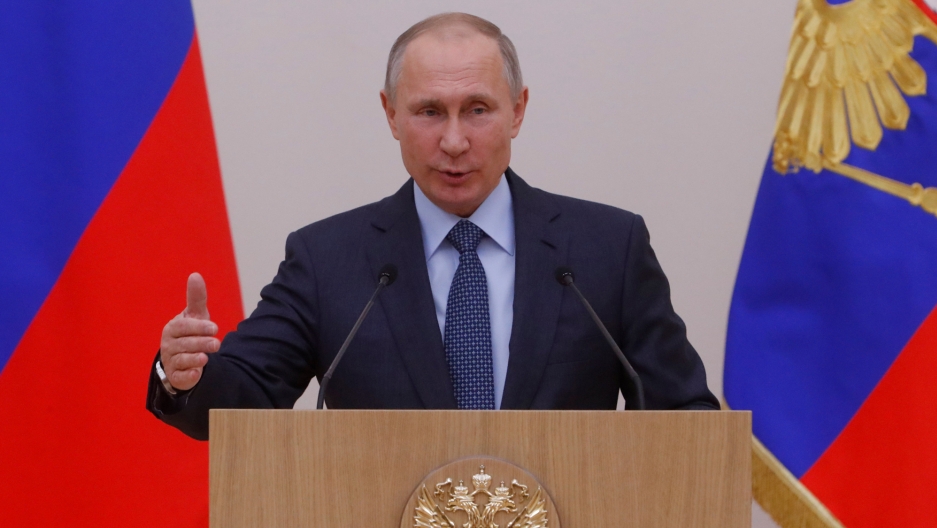 President Vladimir Putin, during a surprise visit to Russia's Hmeymim air base in Syria, ordered "a significant part" of Russia's military contingent in Syria to start withdrawing.

Putin made the announcement adding that Moscow and Damascus had achieved their mission of destroying ISIS in just over two years.

The Russian president was in Syria to hold talks with President Bashar al-Assad and to address Russian forces.

The Kremlin first launched air strikes in Syria in September 2015 in its biggest Middle East intervention in decades. While Putin declared Russia’s main goal at the time was to destroy ISIS, the Russian intervention also turned the tide of the conflict in Assad's favor, while dramatically increasing Moscow's own influence in the region.

Syrian state television quoted Assad as thanking Putin for Russia's help, saying the blood of Moscow's "martyrs" had been mixed with the blood of the Syrian army.

Russia's campaign, which has been extensively covered on state TV, has not caught the imagination of most Russians. But nor has it stirred unease of the kind the Soviet Union faced with its calamitous 1980s intervention in Afghanistan.

The use of private military contractors, something which has been documented by Reuters but denied by the defense ministry, has allowed Moscow to keep the public casualty toll fairly low.

But the Kremlin’s Syrian campaign brought other human costs: the 2015 bombing of a Metro Jet passenger plane — killing 224 mostly Russian tourists — over the Sinai Peninsula, the 2016 public execution of Russia’s Ambassador to Turkey, and the 2017 bombing of the St. Petersburg metro were all allegedly carried out in the name of revenge for the Russian military campaign.

A recent poll by the Moscow-based Levada Center found nearly half of Russians — 49% — thought Russia’s involvement in Syria should come to a close.

Russia's "mission completed" moment in Syria may help Putin increase the turnout at the March presidential election by appealing to the patriotism of voters and — perhaps — a shift to domestic bread and butter issues.

Though polls show he will easily win, they also show that some Russians are increasingly apathetic about politics, and Putin's supporters are keen to get him re-elected on a big turnout, which in their eyes confers legitimacy.

Putin, who has dominated Russia's political landscape for the last 17 years with the help of state television, told Russian servicemen they would return home as victors.

"The task of fighting armed bandits here in Syria, a task that it was essential to solve with the help of extensive use of armed force, has for the most part been solved, and solved spectacularly," said Putin.

Wearing a dark suit and speaking in front of a row of servicemen holding Russian flags, Putin said his military had proved its might, that Moscow had succeeded in keeping Syria intact as a "sovereign independent state" and that the conditions had been created for a political solution.

Indeed, last month, Putin launched a flurry of diplomatic activity surrounding the Syrian problem — hosting talks with Syrian leader Bashar al-Assad and later, the leaders of Turkey and Iran in Sochi, as well as fielding calls with other key regional leaders in the Middle East.

The moves seemed calculated to demonstrate Russia’s growing influence in the region — as well as how the US had been largely sidelined.

Where once Presidents Obama and Trump once issued demands that the Assad regime would have no place in a post-conflict Syrian state over its use of chemical weapons — allegations Russia has adamantly argued are false — the White House has acquiesced to Moscow’s demands that Assad stay for now.

Putin is now keen to organize a special event in Russia — the Syrian Congress on National Dialogue — that Moscow hopes will bring together the Syrian government and opposition and try to hammer out a new constitution.

"I congratulate you!" Putin told the servicemen.

"A significant part of the Russian military contingent in the Syrian Arab Republic is returning home, to Russia. The Motherland is waiting for you."

Putin made clear however that while Russia might be drawing down much of its forces, its military presence in Syria was a permanent one and that it would retain enough firepower to destroy any ISIS comeback.

Russia will keep its Hmeymim air base in Syria's Latakia Province and its naval facility in the Syrian Mediterranean port of Tartous "on a permanent basis," said Putin.

Both bases are protected by sophisticated air defense missile systems.

Separately, Kremlin spokesman Dmitry Peskov said Putin and Turkish counterpart Tayyip Erdogan would discuss a possible political resolution to Syria's more than six-year-old war when they met later on Monday in Ankara, as well as preparations for the work of the Syrian Congress on National Dialogue.