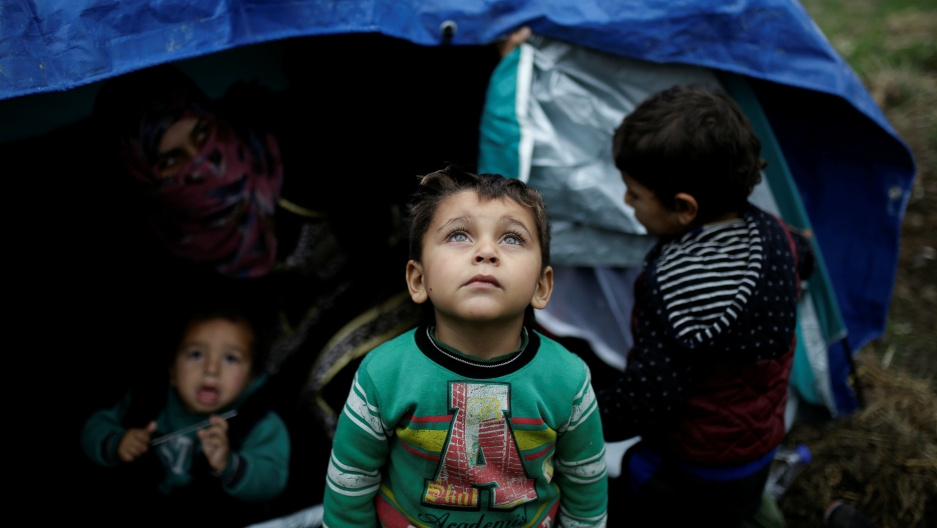 A Syrian refugee boy stands in front of his family tent at a makeshift camp for refugees and migrants next to the Moria camp on the Greek island of Lesbos, Nov. 30, 2017.

Overcrowding at a refugee camp on the Greek island of Lesbos is causing an increase in illness among children living there, say aid workers.

Doctors working at Moria camp have seen a rise in upper respiratory tract infections, colds, coughs, diarrhea and other illnesses associated with cramped and unsanitary conditions.

“The conditions inside are really disgusting,” says Gemma Gillie, of Doctors Without Borders. “They are sleeping in such close quarters. Because they are children and they have a weaker immune system, they are very susceptible to illnesses like this.”

It has also had an impact on the mental health of children in the camp.

“We’re seeing a lot of symptoms of anxiety among the children. It’s a very tense, unpleasant, un-child-friendly atmosphere,” says Gillie. “That’s goes for the adults and the children, there’s just such a level of uncertainty. People don’t really understand what is happening, and how long they are going to be there. They feel powerless.”

Some refugees have even reportedly resorted to self-harm in an attempt to get off the island.

The camp has seen a massive influx of people over the last few months, with many new arrivals from Mosul, in Iraq, and Raqqa, in Syria — both cities that were recently liberated from ISIS.

As many as 100 people a day were arriving on the island during November.

The demographics of the new arrivals has also complicated matters. A large proportion are women and children who require a high level of care. This has stretched resources to breaking point.

Aid groups have called on the Greek government to allow migrants and refugees to be moved to the Greek mainland.

The mayor of Lesbos, Spyros Galinos, has accused the Greek government of turning Lesbos into a “concentration camp.”

Since a deal was struck between the European Union and Turkey in March 2016, people seeking asylum are kept on the islands they land on while their claims are processed.

This has created a bottleneck on Lesbos that rights groups describe as a “containment policy” that harms the well-being of refugees and migrants.

On Friday, Oxfam reported that the Greek government is planning to move 5,000 people from the Greek islands to the mainland for processing. Athens has not formally announced the plan.

Nicola Bay, head of mission for Oxfam in Greece, called the Greek government’s move a “positive step,” but called for the government and the EU to “end their containment policy which has created a virtual ghetto at Europe's edge.”