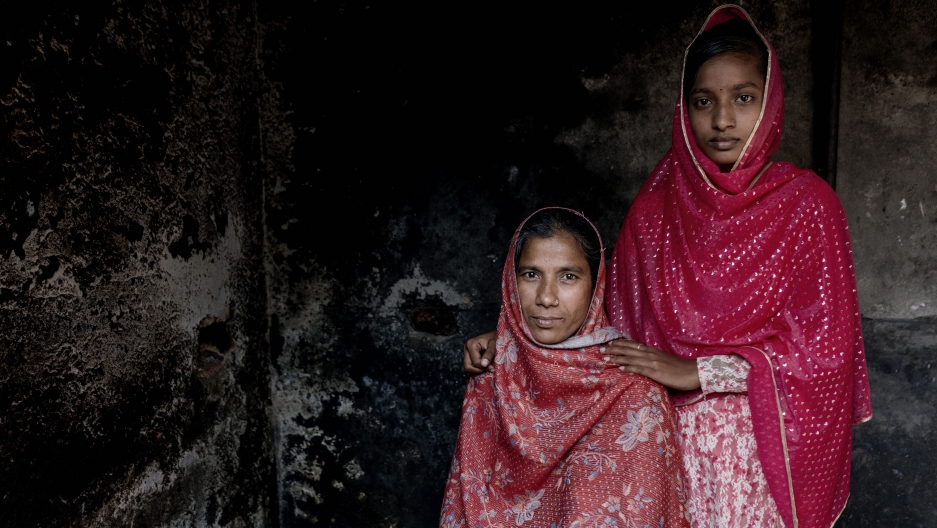 Mother and daughter, Rongmala Begum (standing) and Mayna Begum, are shown at their home outside of Dhaka, Bangladesh.

Sometimes, Rongmala Begum wonders who wears the sweaters she makes.

There isn’t a lot of time to stop and think about this when Begum is at the garment factory where she works in Dhaka, Bangladesh. Too many needles and scissors and glue guns around — not exactly conducive to looking up and pondering the irony of global capitalism: that a woman in a subtropical country would spend her days and nights making sweaters. She earns about $70 a month. But Begum says, on occasion, she looks at the sweaters and thinks, who is going to wear this?

Begum, like many of Bangladesh’s garment workers, doesn’t know how old she is. She doesn’t have a birth certificate, which is common for the rural poor here. She thinks she’s in her 40s. She has an identification card, but she can’t read it. Begum is illiterate.

She’s from Sherpur, a district bordering India. At some point several years ago, she did what village girls fleeing poverty do here in Bangladesh: She came to Dhaka, the capital, and got work at the factory.

Her story is a familiar one.

The world’s clothing industry is a workforce comprised of about 80 percent women.

Since the 1980s, Bangladesh has witnessed a substantial increase in female employment in labor-intensive, export-oriented industries — specifically the ready-made garment sector, or RMG.

Girls and young women come from rural areas to find work in the city.

But even though economic growth is necessary for reducing poverty for women and girls, it is not sufficient to dramatically improve their lives, according to a study by the International Labour Organization. The study points out one of the reasons that young women make up such a large part of the RMG workforce in Bangladesh is that “employers of RMG units prefer younger and unmarried women because they are more docile and averse to joining trade unions.”

Which is one reason Rongmala Begum’s daughter, 16-year-old Mayna Begum, easily found work in the garment industry. Mayna Begum left school at the age of 12 to work at a local factory.

Unlike her mother, Mayna Begum can read and write. She works a bit less than her mother, about 12 hours a day. And she makes the same amount of money. She says it’s not that bad.

And for Mayna Begum, it was just expected that she would spend her days hunched over a sewing machine.

“In Bangladesh, garment industry employment is pretty much the only game in town, at least for women,” according to Jennifer Bair, a sociologist at the University of Virginia who studies supply chains in developing countries.

So, what does it mean for a teenager like Mayna Begum to be earning an income?

“There's definitely research that suggests that giving industry employment has some positive effects,” explains Bair. “For example, girls and young women are more likely to delay marriage and motherhood if they're working in or have an opportunity to work in this industry.”

But Bair says these positive effects may be much smaller than we may want them to be.

“We're not necessarily talking about the kind of mobility that we associate with the rags-to-riches story of, you know, going off to college and becoming a doctor. Still, these are important. These are important sources of employment.”

So, Mayna Begum’s job may give her the economic empowerment to marry later and have children later. But it may not change the outcome when she has a family. Someday, if she has daughters, they are just as likely to become garment workers.

“We really haven’t seen a big change in the standard of living of the workers,” explains Asif Ibrahim, owner of numerous garment factories in Bangladesh and Hong Kong. “You see, [women] still haven’t been able to elevate themselves to a certain level. So, that is what we need to achieve.”

Because retail brands are constantly trying to outdo each other with the lowest prices. It’s what consumers want. So, when a big brand comes to someone like Ibrahim, they come with a price they are willing to pay for the product.

“If the consumer in the West just pays 50 cents more … that gets translated into the wage of the workers, [then] directly it can make a big difference in the living standard of the girl who’s sewing in a factory in Dhaka, or in Cambodia, or in Vietnam, or any other place,” says Ibrahim.

And there are many other places. The largest industry is in China, but garment manufacturing moves from one cheap host country to any other place that is even cheaper, faster and less regulated. Bangladesh is eternally trying to catch up to the giant in the north, China. And other Asian countries are always trying to take Bangladesh’s place. So, nobody here wants to make too many demands that could push the retail companies to go somewhere else.

Rongmala Begum and Mayna Begum spend their day off together going for a walk to the market to get some vegetables, maybe some fish. 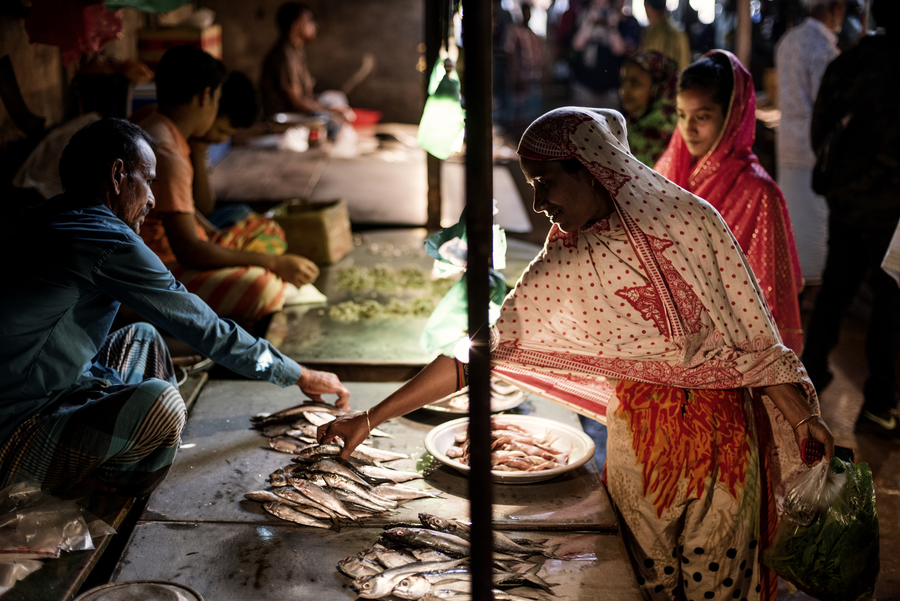 Mother and daughter, Rongmala Begum and Mayna Begum, shop together at the local market on their day off.

On their way, they stop at a fabric store where they get their clothing made. They ooh and aah at the vibrant fabrics. One scarf catches Mayna Begum’s eye. It’s beautifully woven, a rich dark winter shade.

The tag on the scarf? It says “made in China.”

Read more in AWL's "Wear and Tear" series: Her job at the mill bought her a new, better life and How a sweatshop raid in an LA suburb changed the American garment industry and Are factories better in Bangladesh after Rana Plaza? That depends on who you ask and How do consumers make good choices about clothes? Spider silk and brand transparency and How we can create fashion that is inclusive and adaptive or participate in our interactive: How fair is your fashion? Take the quiz.