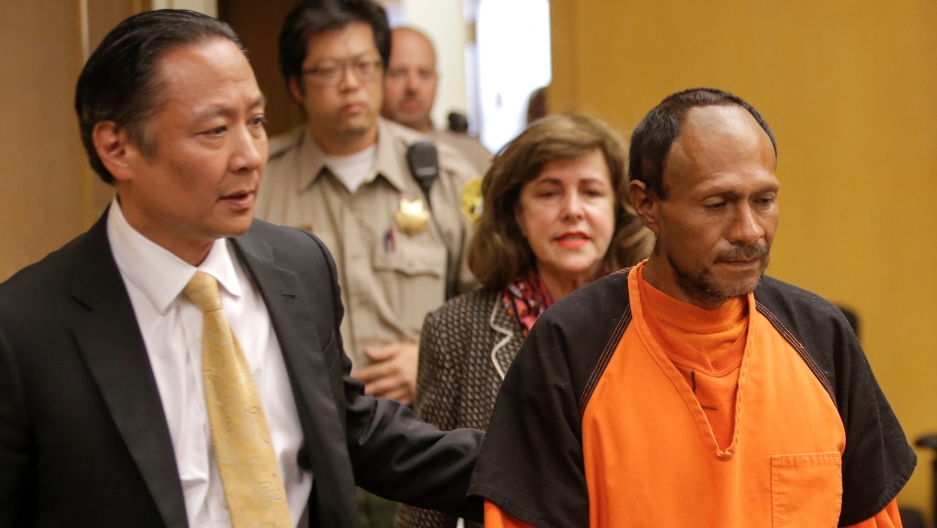 Some of the facts of the shooting death of Kathryn Steinle are clear: On July 1, 2015, 32-year-old Steinle was shot in the back while walking with her father on a popular San Francisco pier. The man who had the gun was José Inés García Zárate.

What’s less clear is why the shooting occurred. Through the course of the trial, which began in October 2017, his defense attorneys maintained that García Zárate unknowingly found the gun wrapped in clothing, and it inadvertently went off after he picked it up. One prosecution witness, a retired police inspector, testified that the bullet ricocheted off the ground before it hit Steinle. Prosecutors contended that García Zárate pointed the weapon and intentionally fired at Steinle. They argued that his inexperience with firearms caused him to jerk the trigger prematurely, causing the ricochet.

The jury was allowed to consider first-degree murder, second-degree murder or felony involuntary manslaughter. On Nov. 30, they found García Zárate not guilty of all charges except for possession of a gun as a felon.

The outrage was swift. Anger about the verdict among those who favor stricter immigration enforcement policies circled around the premise that García Zárate, who had a criminal record, wasn’t supposed to be in the country in the first place — he had been deported five times and had drug felonies on his record. They argue that he should have been found guilty, at the very least, of involuntary manslaughter.

A federal grand jury indicted García Zárate on Dec. 5 for being both a felon and undocumented immigrant in possession of a firearm.

The shooting has been central to the Donald Trump administration's hardline rhetoric for tougher border enforcement. It has also been held up as the reason why sanctuary policies, in which localities do not comply with all requests by federal immigration agents, should be eliminated.

See a map of sanctuary communities in America.

But for others, especially lawyers with an expertise in criminal and immigration laws, the case is not really about immigration.

“The case immediately gets seized upon because of one fact and that is the fact of Mr. García Zárate’s five previous deportations,” says Christopher Lasch, an associate professor at the Sturm College of Law at the University of Denver. “That became the single fact of importance … for anybody that wanted to use this case, sort of a poster case for a restrictionist immigration policy.”

But Lasch says the case can be viewed through different lenses, including possible mental health and drug addiction issues. There are lingering questions about how García Zárate got hold of a weapon and why he was in San Francisco in the first place. He was homeless at the time of the shooting.

The weapon was a firearm stolen from the car of a Bureau of Land Management ranger. Authorities said there was no evidence that it was García Zárate who stole the gun. Likewise, federal authorities once had García Zárate in their custody because he served time for illegally entering the country. He could have been deported immediately after being released from federal prison in early 2015. Instead, federal authorities sent him to San Francisco to face a 20-year-old marijuana drug charge. San Francisco authorities dropped the charge and released García Zárate, despite a request from Immigration and Customs Enforcement (ICE) to detain him for deportation.

Local law enforcement agencies in California do not honor ICE detainers, the written requests immigration agents make to hold an individual in jail after their release date, because of a federal ruling that says such requests violate the Fourth Amendment, which guarantees due process. Since the shooting, San Francisco has changed its policy to allow for detainers that involve suspects with violent felonies on their record. Still, García Zárate’s previous charges were for nonviolent felonies.

Lasch, a former public defender, studied how the case was used to talk about immigration on the national stage. He says it added to long-held misperceptions of the “criminal alien,” though studies have shown a negative correlation between being a non-citizen and criminal activity.

“It seems that the way we have shifted to thinking about immigration is that we somehow think that immigration status is a proxy for criminals status, or worse, maybe criminal inclination,” says Lasch. That particular narrative, he says, can take away from deeper conversations about how to fix a broken immigration system.

Raha Jorjani, an immigration lawyer within Alameda County’s Public Defender’s office across the bay from San Francisco, says the case has become more than just a shooting death, but a misplaced way to talk about immigration as a whole.

“This case was never about immigration," says Jorjani. "But the fact that it was turned into an immigration issue has had negative ramifications in the immigration arena. Immigration policy shouldn't be determined based on tragedy."

García Zárate’s immigration and criminal past was not part of the trial about Steinle’s death and focused instead on the circumstantial evidence surrounding the shooting.

“Legally, [García Zárate’s past] doesn't have anything to do with what happened in that pier,” says Lasch.

Jorjani says everyone facing a criminal charge in the US is presumed innocent until proven guilty, even undocumented immigrants.

“To prove an individual guilty, we know the government has to prove guilt beyond a reasonable doubt, and where they don’t prove guilt beyond a reasonable doubt, a jury — if [the process] is working properly — is required to acquit that person," says Jorjani. "These are rights that we all are supposed to enjoy and that are afforded to individuals regardless of their immigration status."

There have been suggestions that perhaps the prosecution should have tried García Zárate on lesser charges. Jury members examined physical evidence such as a single particle of gun residue found on García Zárate and the trajectory of the single bullet that fired from the gun, which experts say ricocheted off the pier first before hitting Steinle. While some witnesses saw García Zárate at the scene of the shooting, no one saw him actually firing the weapon. During the initial interrogation with investigators, García Zárate admitted to firing the gun, but gave conflicting accounts and appeared disoriented.

For first- and second-degree murder charges, prosecutors had to prove that García Zárate intended to kill Steinle. And prosecutors also needed to prove García Zárate took a substantial and justifiable risk resulting in another person being killed for the felony manslaughter charge, described as “brandishing” the gun. According to news reports, there was no witness testimony that García Zárate waved the gun in a threatening way.

Gabriel Chin, a professor with UC Davis School of Law, says the ricochet seems to have persuaded the jury that there is, at the very least, reasonable doubt whether García Zárate intended to kill Steinle. Meanwhile, the defense's argument that he had picked up the wrapped weapon could have also dissuaded the jury from the manslaughter charge.

"On that basis, the argument is, people pick up packages all the time and don't know what's in them and open them up," says Chin. "It's one thing if you start handling a weapon and you fired off knowing that you're handling the weapon, it's another thing to pick up a package on the street."

Just hours after the jury handed down its “not guilty” verdict, President Donald Trump posted on Twitter: “The Kate Steinle killer came back and back over the weakly protected Obama border, always committing crimes and being violent, and yet this info was not used in court. His exoneration is a complete travesty of justice. BUILD THE WALL!”

Meanwhile, Attorney General Jeff Sessions released the following statement: “When jurisdictions choose to return criminal aliens to the streets rather than turning them over to federal immigration authorities, they put the public’s safety at risk.”

Jessica Vaughan at the Center for Immigration Studies in Washington, DC., which advocates curbing immigration, said in a statement that Congress needs to prioritize addressing problems in the immigration system that allowed the shooting to happen.

“It’s shocking and disturbing that [García] Zárate has escaped responsibility for Kate Steinle’s death,” said Vaughan. “What is even more shocking and disturbing is that San Francisco, Chicago, New York, and other cities, and now the entire state of California still insist on keeping the sanctuary policies that led to this tragedy.“

Jim Steinle, Kathryn Steinle's father, told the San Francisco Chronicle that her family was "shocked" and "saddened" by the verdict and that “justice was rendered, but it was not served.” In interviews, family members have expressed discomfort with how the case has been used in politics. But they’ve also said more could have been done to prevent Steinle’s death at all levels of government — from local to federal law enforcement agencies.

Meanwhile, ICE has said that agents will work to take García Zárate into custody and deport him.

Chin says it's unfortunate that this one anomalous case has been used to shape policy.

"It's another example of policymaking by anecdote," he says. "It's an unfortunate way to construct a justice system because we should really be thinking about typical cases, be aware of outlier cases, but we should wait until all the facts come out."

Jorjani says the conversations about immigration should be about "healthy communities."

“We all ultimately want to live in a healthy community — and we have to ask ourselves whether our current immigration policies are going to help us do that.”

With reporting by Monica Campbell.