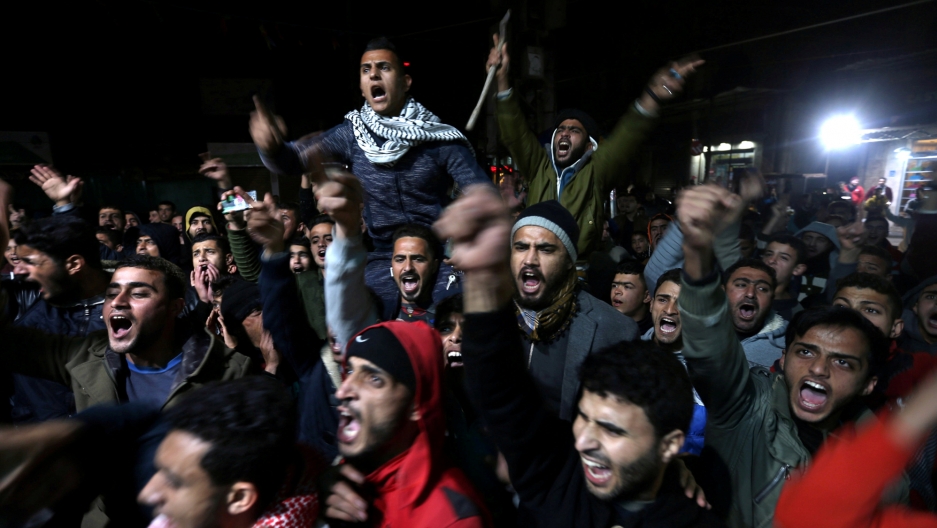 Palestinians react during a protest against Trump's decision to recognize Jerusalem as Israel's capital, in Khan Younis in the southern Gaza Strip, Dec. 7, 2017.

The Israeli military said it was reinforcing troops in the occupied West Bank as Hamas urged Palestinians on Thursday to abandon peace efforts. The Islamist group is calling for a new uprising against Israel in response to US President Donald Trump's recognition of Jerusalem as its capital.

The Israeli military has deployed several new army battalions and put other forces on standby, describing the measures as part of its "readiness for possible developments."

Protests so far have been scattered and largely non-violent.

But dozens of Palestinians gathered at two points on the Gaza border fence with Israel and threw rocks at soldiers on the other side. Inside Gaza, thousands of Palestinians rallied, some chanting: "Death to America! Death to the fool Trump!" and burning tires. 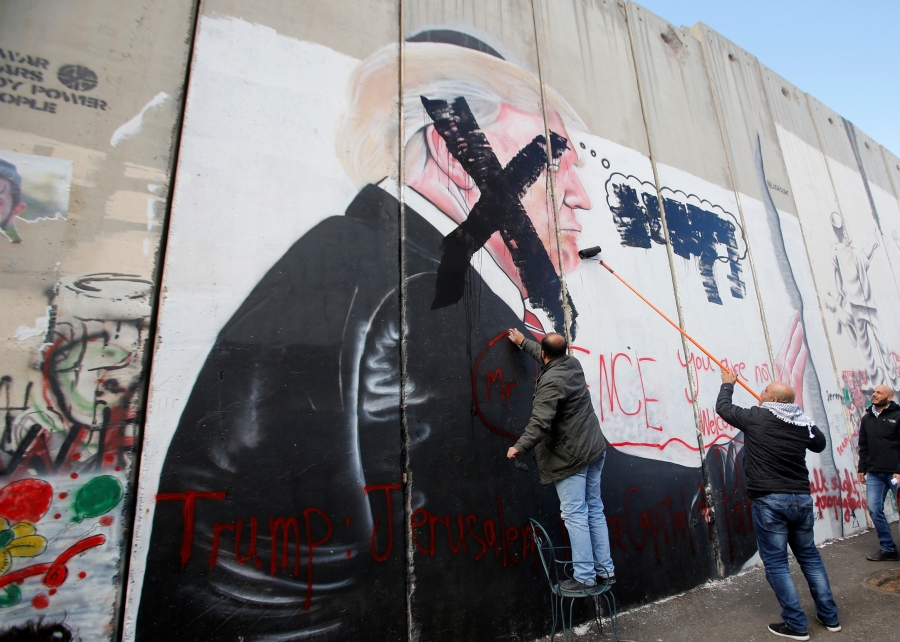 Palestinians damage a mural depicting President Donald Trump that is painted on a part of the Israeli barrier, in the West Bank city of Bethlehem.

Trump reversed decades of US policy on Wednesday by recognizing Jerusalem as the capital of Israel, imperiling Middle East peace efforts and upsetting the Arab world and Western allies alike.

The status of Jerusalem — home to sites holy to the Muslim, Jewish and Christian religions — is one of the biggest obstacles to reaching a peace agreement between Israel and the Palestinians.

"We should call for and we should work on launching an intifada (Palestinian uprising) in the face of the Zionist enemy," Hamas leader Ismail Haniyeh said in a speech in Gaza.

Haniyeh, elected the group's overall leader in May, urged Palestinians, Muslims and Arabs to hold rallies against the US decision on Friday, calling it a "day of rage."

Naser Al-Qidwa, an aide to Palestinian President Mahmoud Abbas and senior official in his Fatah party, urged Palestinians to stage protests but said they should be peaceful.

Israel considers Jerusalem its eternal and indivisible capital. Palestinians want the capital of an independent state of theirs to be in the city's eastern sector, which Israel captured in the 1967 Middle East war and annexed in a move never recognized internationally.

Trump announced his administration would begin a process of moving the US Embassy in Tel Aviv to Jerusalem, a step expected to take years and one that his predecessors opted not to take to avoid inflaming tensions. 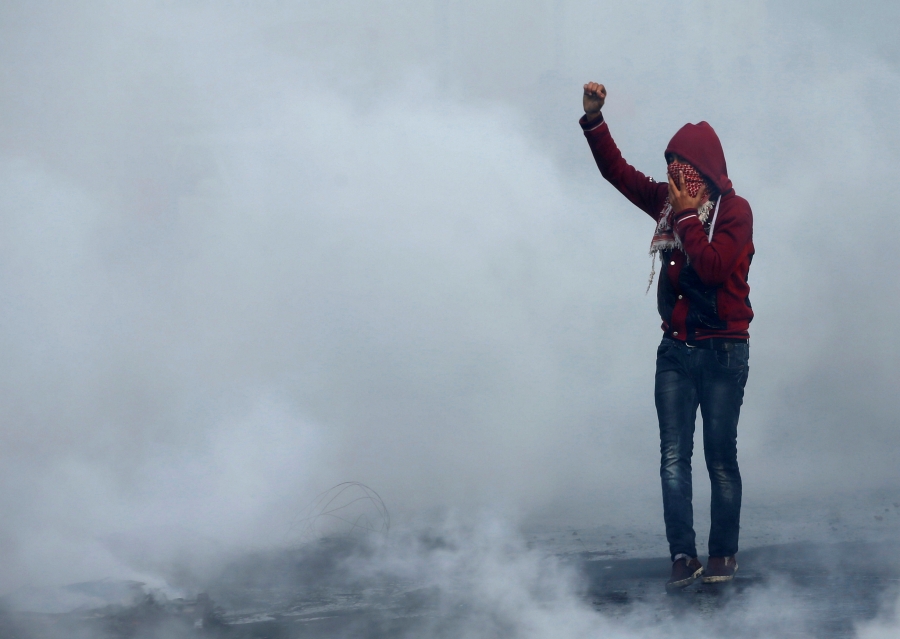 A Palestinian youth takes part in a protest over President Donald Trump's decision to recognize Jerusalem as the capital of Israel, in Gaza City Dec. 7, 2017.

Israeli Prime Minister Benjamin Netanyahu, who hailed Trump’s announcement as a "historic landmark," said on Thursday many countries would follow the US move and contacts were underway. He did not name the countries he was referring to.

"President Trump has immortalized himself in the chronicles of our capital. His name will now be held aloft, alongside other names connected to the glorious history of Jerusalem and of our people," he said in a speech at Israel's Foreign Ministry.

Other close Western allies of Washington, including France and Britain, have been critical of Trump's move. Pope Francis has called for Jerusalem's status quo to be respected, while China and Russia have also expressed concern.

The EU's foreign policy chief Federica Mogherini said: "The European Union has a clear and united position. We believe the only realistic solution to the conflict between Israel and Palestine is based on two states and with Jerusalem as the capital of both."

Trump's decision has raised doubts about his administration’s ability to follow through on a peace effort that Trump's son-in-law and senior adviser, Jared Kushner, has led for months aimed at reviving long-stalled negotiations.

The United Nations Security Council is likely to meet on Friday to discuss the U.S. decision, diplomats said.

Israel and the United States consider Hamas, which has fought three wars with Israel since 2007, a terrorist organization. Hamas does not recognize Israel's right to exist and its suicide bombings helped spearhead the last intifada, from 2000 to 2005.

"We have given instruction to all Hamas members and to all its wings to be fully ready for any new instructions or orders that may be given to confront this strategic danger that threatens Jerusalem and threatens Palestine," Haniyeh said.

"United Jerusalem is Arab and Muslim, and it is the capital of the state of Palestine, all of Palestine," he said, referring to territory including Israel as well as the Hamas-controlled Gaza Strip and the Israeli-occupied West Bank.

Haniyeh called on Western-backed Abbas to withdraw from peacemaking with Israel and on Arabs to boycott the Trump administration.

Abbas said on Wednesday the United States had abdicated its role as a mediator in peace efforts. Palestinian secular and Islamist factions have called for a general strike and rallies on Thursday. 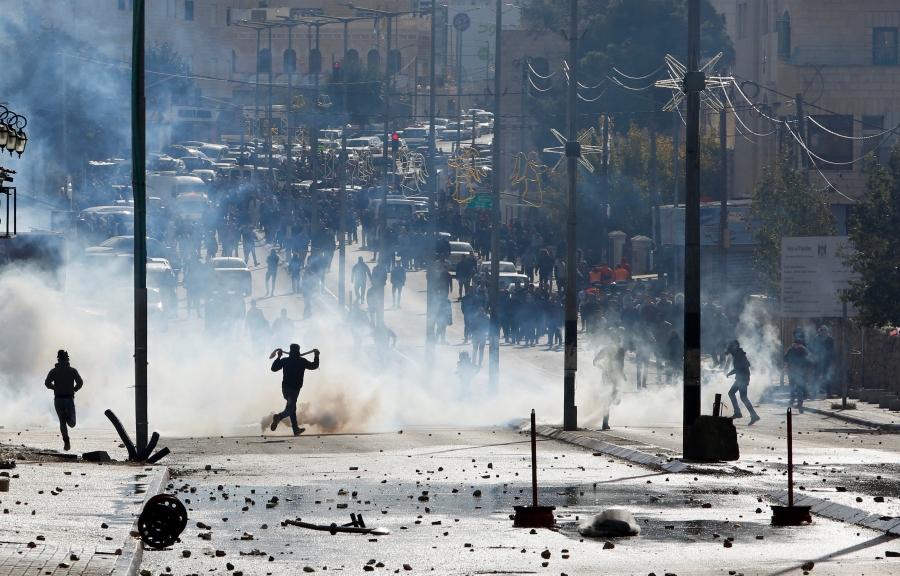 Palestinian protesters run for cover from tear gas fired by Israeli troops during clashes at a protest, in the West Bank city of Bethlehem Dec. 7, 2017.

The international community does not recognize Israeli sovereignty over the whole of Jerusalem, believing its status should be resolved in negotiations. No other country has its embassy in Jerusalem.

Trump's decision fulfils a campaign promise and will please Republican conservatives and evangelicals who make up a sizeable portion of his domestic support.

He said his move was not intended to tip the scale in favor of Israel and that any deal involving the future of Jerusalem would have to be negotiated by the parties, but the move was seen almost uniformly in Arab capitals as a sharp tilt toward Israel.

The United States is asking Israel to temper its response to the announcement because Washington expects a backlash and is weighing the potential threat to US facilities and people, according to a State Department document seen by Reuters.

Protests broke out in areas of Jordan's capital, Amman, inhabited by Palestinian refugees, and several hundred protesters gathered outside the US consulate in Istanbul on Wednesday after Trump's announcement.

Protests are expected on Thursday in Pakistan, where the government said of Trump's move: "It is a serious setback to the rule of law and international norms. It signals a severe blow to the Middle East peace process."

Taliban insurgents in Afghanistan said the United States was "exposing its colonial ambition in Muslim territory."

Palestinians switched off Christmas lights on trees outside Bethlehem's Church of the Nativity, where Christians believe Jesus was born, and in Ramallah, next to the burial site of former Palestinian leader Yasser Arafat, in protest.

By Dan Williams and Nidal al-Mughrabi/Reuters

(Additional reporting by Hamid Shalizi in Kabul and Kay Johnson in Islamabad; Editing by Nick Tattersall and Janet Lawrence)