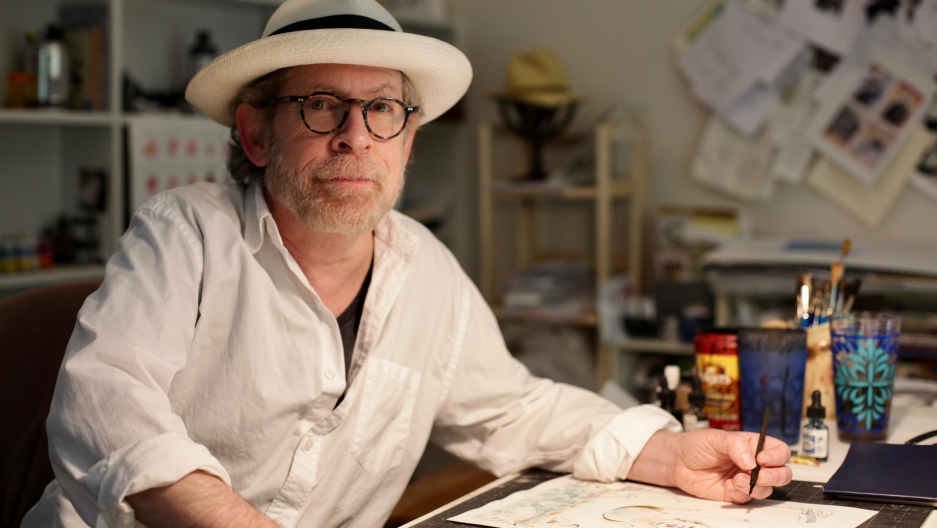 Illustrator Barry Blitt at his home studio in Connecticut.

Over the past three decades, artist Barry Blitt has paired his signature ink and watercolors with his dry wit to create memorable covers for The New Yorker magazine.

Now, Blitt is out with a new book that contains some of his most memorable work, including the controversial 2008 cover “The Politics of Fear,” and 2016’s Trump-inspired “Donald’s Rainy Days” and “The Big Short.”

Blitt, originally from Canada, lives in Connecticut in a house that is the former home of playwright Arthur Miller. His studio is filled with paint brushes, pens, ink, watercolor paints and an actual drawing board. He usually draws with crow-quill pens. Blitt calls himself and his work methods “old-timey.”

Sometimes he will scan his work into a computer in order to saturate the colors a bit more, but he says he’s not really good at it. For The New Yorker, his artwork is usually picked up by someone in a car and driven two hours into New York City.

“As The New Yorker has asked for more topical stuff, my deadlines [are] sometimes only a few hours,” he says. “So, I can only knock out two or three versions. But, for a crazy person like me, if I've got five days for a deadline, or even two days for a deadline, I'll draw as many times as I can. I have sent in, like, seven versions of a finished piece. I think I'm trying it several different ways, but I'm giving them the same damn thing several times. [The one that gets published] is always the first one.”

Blitt says he sometimes pitches ideas to The New Yorker, but more often than not, when a big story breaks and they want it featured on the cover, the magazine sends a mass email out to many artists soliciting ideas. Usually, they will want something funny or the editors will say, “try to depict this in an odd way,” Blitt explains. “If possible, a metaphor would be good.” 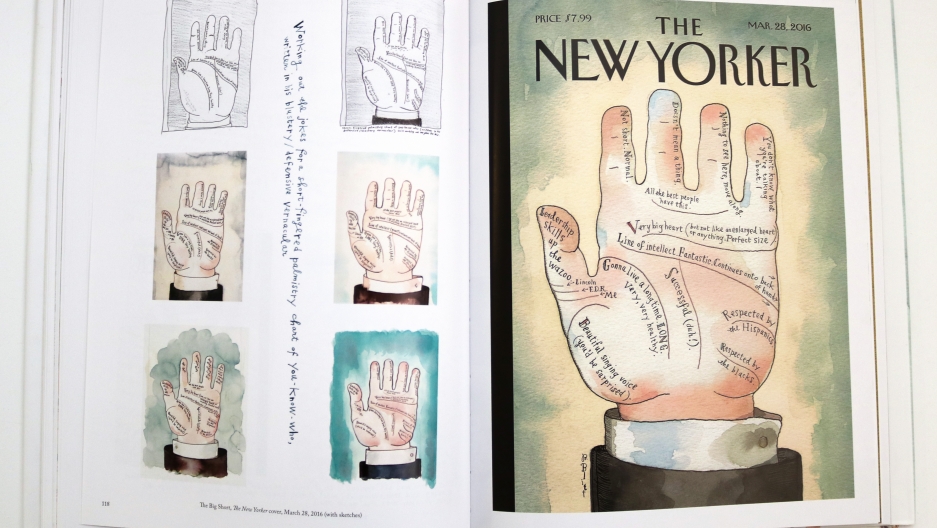 “What you’re looking for is life in the line,” Blitt says about finding his finished product. “Sometimes, you’ll do a drawing that doesn’t look enough like Hillary and you draw it a second time. The second time it looks more like her, but the first time there was some magic or discovery in the actual line work and it’s a better drawing, and that’s the one you use.” 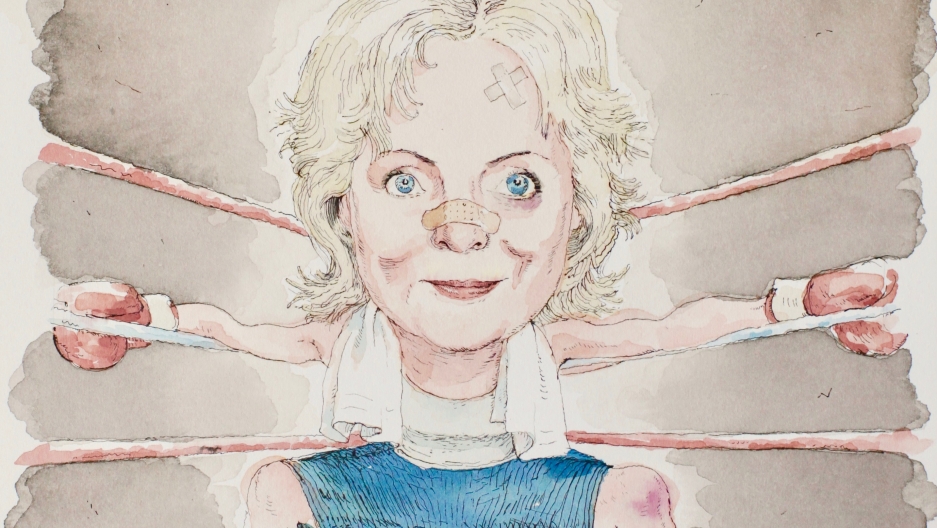 Original artwork of Hillary Clinton for The New Yorker cover “Ready for a Fight.”

Blitt’s arguably most famous cover depicts Barack and Michelle Obama dressed in “terrorist” garb and sharing a fist bump in the Oval Office.

At the time, Blitt was fascinated with Rush Limbaugh, who kept talking about “terrorist fist bumps” and how the Obamas were friends with terrorists and the existence of a secret video of Michelle using the term “whitey,” which, of course, turned out to be false. “There was just so much hatred in the air and this seemed like a funny way to draw it all,” Blitt says.

Blitt says he scribbled out a black-and-white drawing of it first and then added more touches: an American flag in the fireplace, a picture of Osama Bin Laden on the wall. “I mean, I really wanted to go over the top with this thing,” Blitt says. 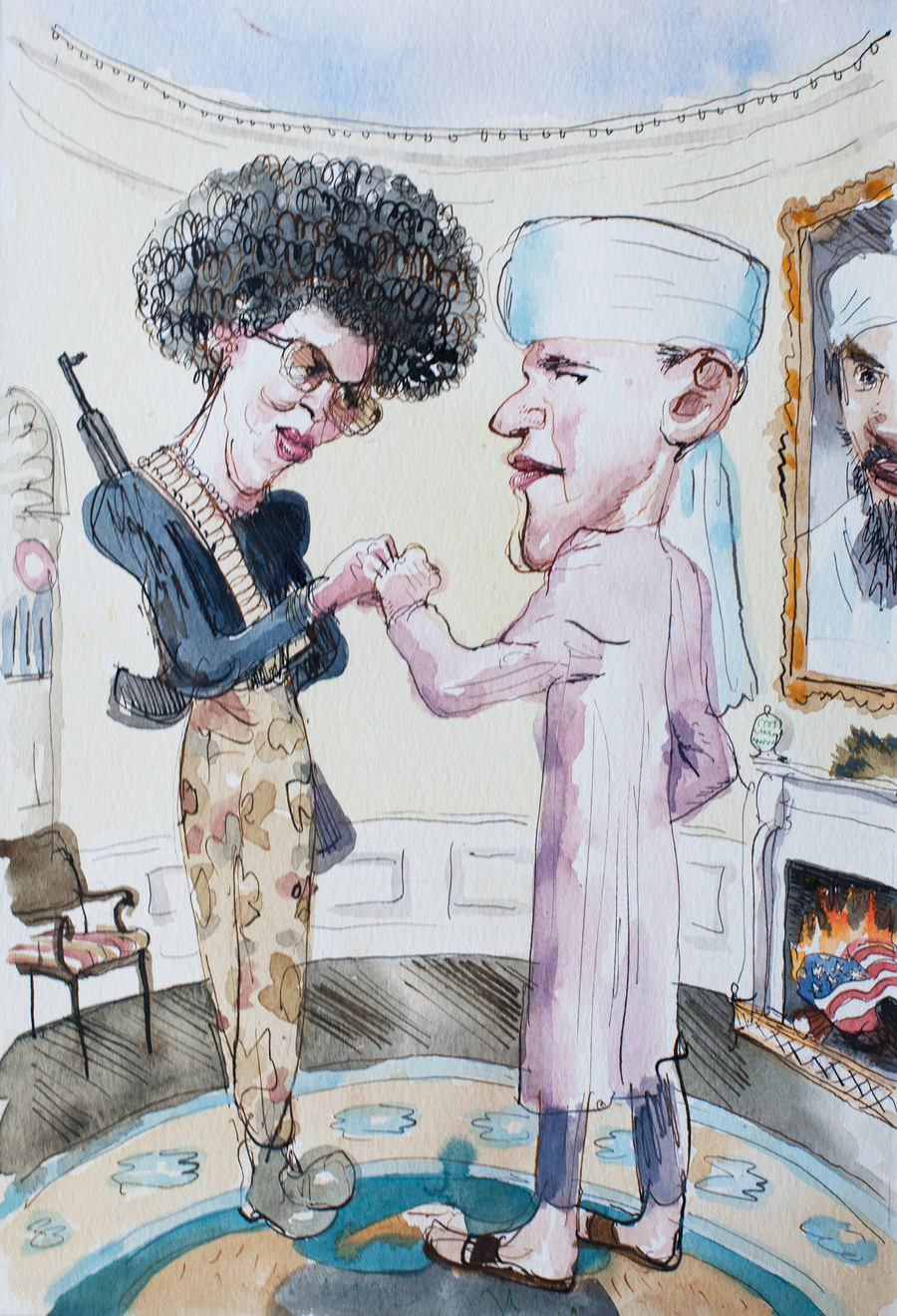 An early draft of Blitt’s controversial The New Yorker cover “The Politics of Fear.”

Blitt’s cover became an object of national conversation and he received many outraged emails. He says he expected some backlash, but not as much as he actually got.

Asked if he has regrets about drawing this cover, Blitt replies, “Oh I have regrets about everything, but not the things you are supposed to have. ... I wish the fire in the fireplace was more convincingly rendered. I wish it was drawn a little bit better. Those are my regrets. Yeah. It was an interesting thing to live through.”