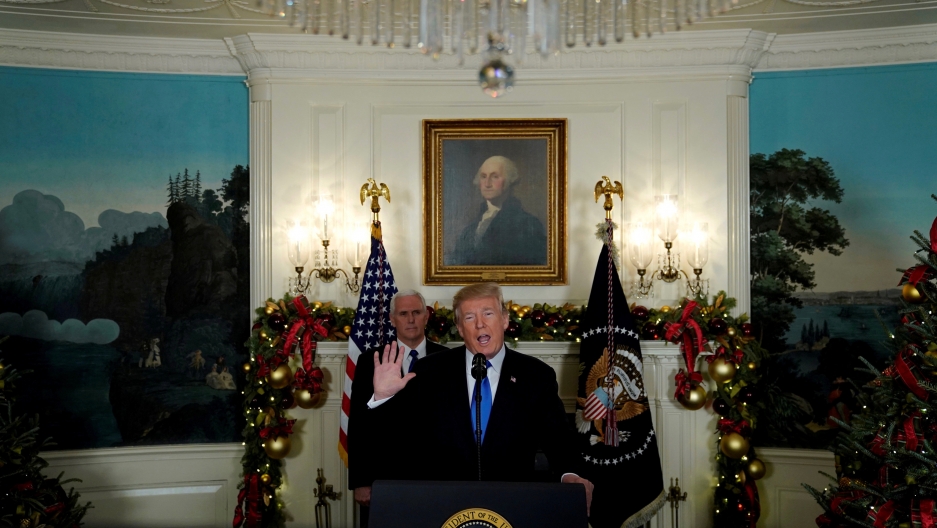 Past presidents talked about it. But Donald Trump did it.

“My announcement today marks the beginning of a new approach to conflict between Israel and the Palestinians,” Trump said on Wednesday during a speech at the White House.

“It is time to officially recognize Jerusalem as the capital of Israel,” Trump said from a podium flanked by two decorated Christmas trees.

“While previous presidents have made this a major campaign promise, they failed to deliver. Today, I am delivering.”

Among those applauding the move by President Trump was Israel’s prime minister, Benjamin Netanyahu.

Netanyahu issued a statement calling it a “historic day,” saying "the Jewish people and the Jewish state will be forever grateful" to the United States for the decision.

The Israeli mayor of Jerusalem, Nir Barkat, said Trump made the right move and it should have been made by the US long ago.

“It’s the right thing to do. And here in Jerusalem and Israel, we applaud the president,” Barkat told CNN.

NOW: Jerusalem Old City walls light up in colors of Israeli and American flags as Trump to declare Jerusalem capital of Israel. pic.twitter.com/uu6s1LNRR3

@realDonaldTrump- a leader who is willing to do what is right. We are ecstatic Jerusalem is recognized as Capital! Israel is a sacred place

But other religious leaders were critical of Trump’s decision to dispense with nearly 70 years of US foreign policy tradition.

“Jerusalem is a unique city,” Pope Francis said during his weekly appearance at the Vatican, “sacred to Jews, Christians and Muslims, where the Holy Places for the respective religions are venerated, and it has a special vocation to peace.”

Francis said, “I pray to the Lord that such identity be preserved and strengthened for the benefit of the Holy Land, the Middle East and the entire world, and that wisdom and prudence prevail, to avoid adding new elements of tension in a world already shaken and scarred by many cruel conflicts.”

Christian leaders in the Holy Land expressed concerns about President Trump’s declaration on Jerusalem, warning that “any sudden changes would cause irreparable harm.”

Palestinian leaders denounced the new American policy in no uncertain terms. President Mahmoud Abbas said Trump has undermined the US role as a mediator between Israel and the Palestinians, hurt the chances of reaching a two-state solution and encouraged the Israeli occupation.

While Trump specifically allowed that a "two-state solution" might still emerge from future peace talks, chief Palestinian negotiator Saeb Erekat said, "President Trump has delivered a message to the Palestinian people: The two-state solution is over. Now is the time to transform the struggle to one of one state with equal rights for everyone living in historic Palestine, from the river to the sea."

From the trenches in Jerusalem, this is what the conflict looks like tonight: we're in a vehicle w/ no brakes, no steering wheel, the traffic laws are unclear, there is no destination and the driver is an adolescent with a learner's permit and a personality disorder.

“For me, [Jerusalem] is the capital of Israel,” Seidemann tells PRI’s The World. But for the international community, going back to 1948, Seidemann says that the status of Jerusalem is something to be determined in negotiations between Israelis and Palestinians.

“If I look outside my window, I see a city that is divided, that is bi-national, that’s contested, unsustainable, and no hollow gesture of recognizing or moving a capital is going to change that.”

President Trump said he ordered the State Department to begin preparations for moving the American Embassy, which is currently in Tel Aviv, to Jerusalem. But it’s not clear how long the move would take.

In any event, Diana Buttu, a Palestinian Canadian lawyer and former spokeswoman for the Palestine Liberation Organization, says she failed to hear anything positive in President Trump’s speech.

“He’s sending the message to Israel that might is right, that they can seize land in violation of international law and with time, that seizure will be recognized. This is why there isn’t a single embassy in Jerusalem.”