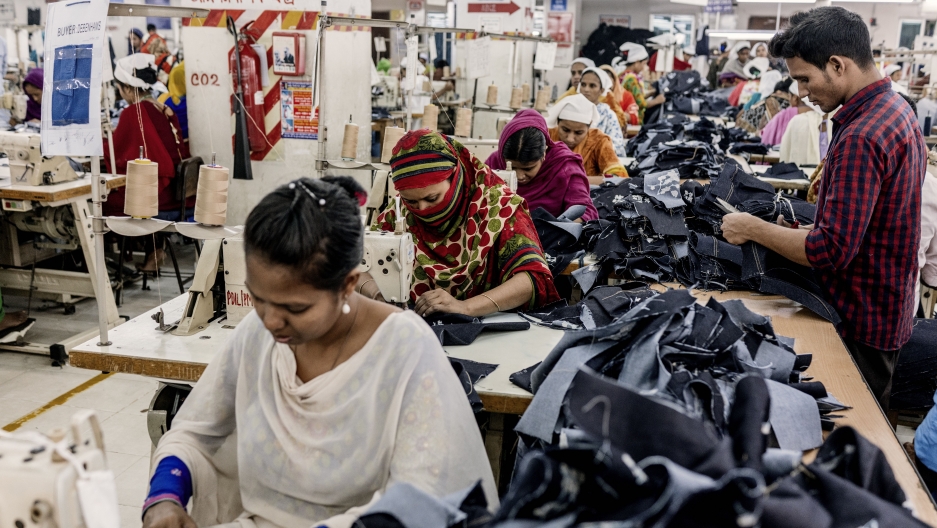 These are garment workers at a factory making denim jeans.

What if she hadn’t lost her shoe that day? Arati Baladas wonders about this sometimes.

Baladas is 20, and she sometimes replays in her mind that moment on April 24, 2013,  when she scrambled to find her missing sandal, as the walls and the ceiling around her crumbled.

She was working at her sewing machine when she heard a loud bang. She says the building “shivered.” Her supervisor told everyone to run.

Baladas who often slipped her shoes off at work, searched for her sandal. “Just run!” her supervisor said. She sprinted, and tripped. She doesn’t remember anything else. 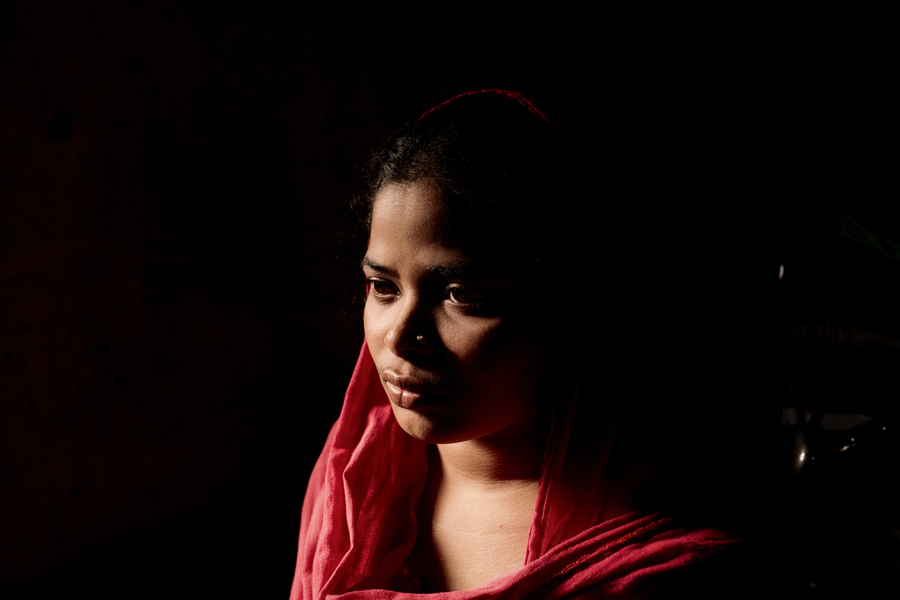 Former garment worker Arati Baladas at her home outside of Dhaka.

On that morning, the Rana Plaza garment factory complex became a pile of rubble.

“I was under a dead body,” Baladas says.

The images of the collapsed Rana Plaza show a pile of cement and iron rods tangled with human limbs and fabric. Fabric that was destined to be made into clothing for big-brand stores. Baladas was trapped under all that, her leg stuck under another worker’s body.

By the time she woke up to the sound of rescuers, Baladas had been buried for three days. Her mother, who worked at the same factory, died in the collapse. Baladas was taken to the hospital, where they had to amputate her leg.

The Rana Plaza collapse was the deadliest accident in garment industry history. The final death toll was over 1,000 and approximately 2,500 people were injured.

The building had not been built for thousands of workers operating heavy machinery. Additional floors had been added illegally. The day before the collapse, managers found deep fissures in the structure.

Now where Rana Plaza used to be, it’s just an empty lot with overgrown bushes and mounds of garbage. 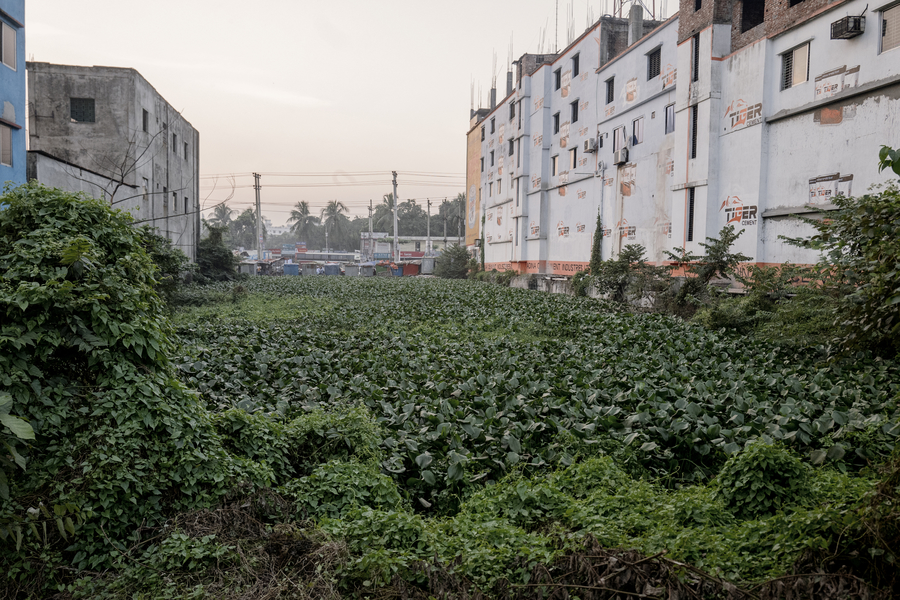 The empty lot where the Rana Plaza factory complex was located before it collapsed in 2013.

Every morning, thousands of workers, mostly women, walk past it on the way to garment factories.

Adrian Rodriguez is the merchandising manager at the Waymart Factory in Dhaka. At Waymart, workers make clothing for Debenhams and Next, two British retailers. 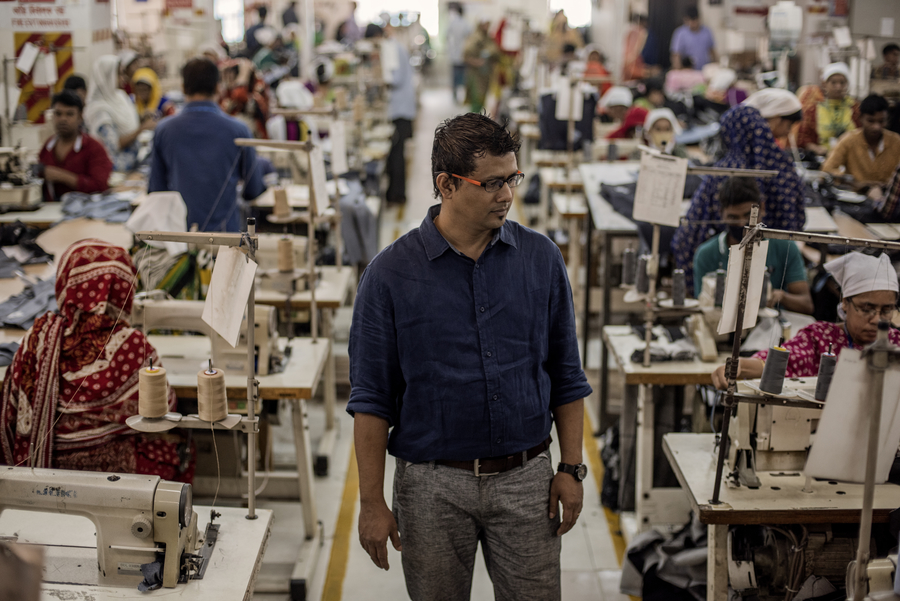 “Buyers have become more alert than before,” says Rodriguez. He says that after Rana Plaza, retailers changed the way they did business with factories in Bangladesh.

And he says, Rana Plaza taught the industry two things: First, as much as consumers love a bargain, they don’t want blood on their hands. And second, Bangladeshi factory owners are learning the value of a happy worker.

“They have seen that if they’re behaving better with the employees, if they are giving better facilities, they are getting the products out better.”

Out on the production floor, rows of workers, almost all women, hunch over their tables, their needles ricocheting through denim. This is not a cushy job. The hours are long. The work is repetitive and physically draining. 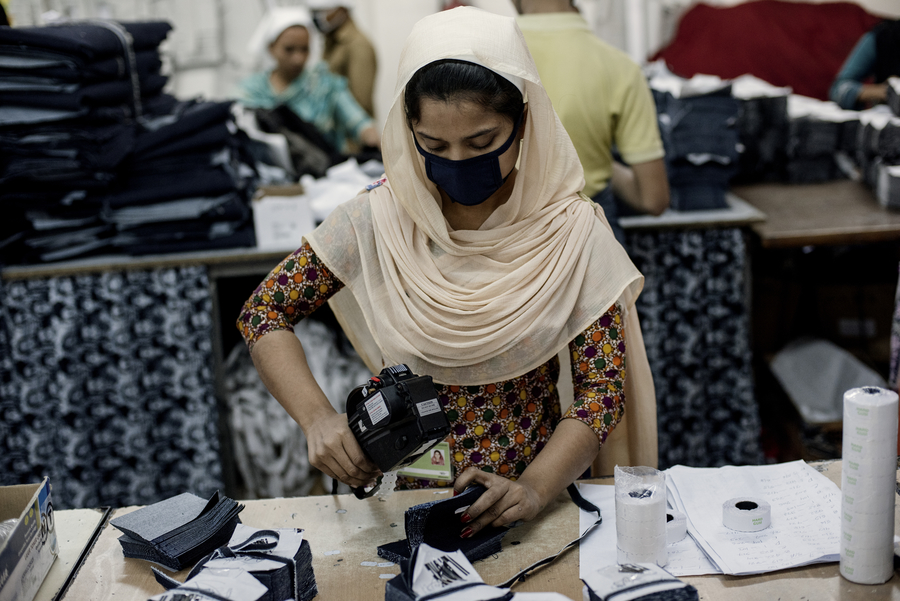 It’s warm and the fans seem to just push hot air around. And the building has been checked by structural engineers.

These are all great improvements. And yet, activists say, there’s a long way to go.

“These jobs are not [jobs] with respect,” says Kalpona Akter. “These jobs have no dignity.”

Akter worked in garment factories as a child. She’s now a union leader, And she understands what a delicate battle this is. Twenty percent of this country’s gross domestic product comes from garment production.

She says that European companies like Adidas and H&M have tried to improve work conditions by signing something called the Accord on Fire and Building Safety in Bangladesh. In it, they promise they won’t do business with factories that aren’t up to safety standards.

Rob Wayss is the executive director and acting chief safety inspector for the accord.

Wayss says inspectors identify hazards and also train workers on how to respond in the event of an emergency.

The Bangladesh Accord is a legally binding agreement.

Getting the big North American brands to be better about safety has been a challenge.

They didn’t sign the accord. Instead, they created something called, the Alliance for Bangladesh Worker Safety. Unlike the accord, it’s not legally binding, and it’s been criticized for having less teeth.

Nearly 2,000 factories are covered by the alliance and the accord. But there are thousands of factories manufacturing garments that are not part of either agreement.

Ultimately, Akter says, it isn’t just the responsibility of clothing brands. Or even of factory owners. The buck stops with the consumer.

“Start with the store managers. Ask him, ‘I want to know more about this worker. Are they paid a living wage? Are they safe?’”

Arati Baladas doesn’t think factories in Bangladesh are any safer now than when the Rana Plaza building collapsed on her. She says she’ll never go back to the factory. And no child of hers will go, either. But in Bangladesh, almost all roads lead to garment work. What else is there?

Sometimes at night, Baladas says a strange itch wakes her up. Phantom limb feelings are common in amputees. She swears she can feel her toes. She reaches down, only to find there is nothing. 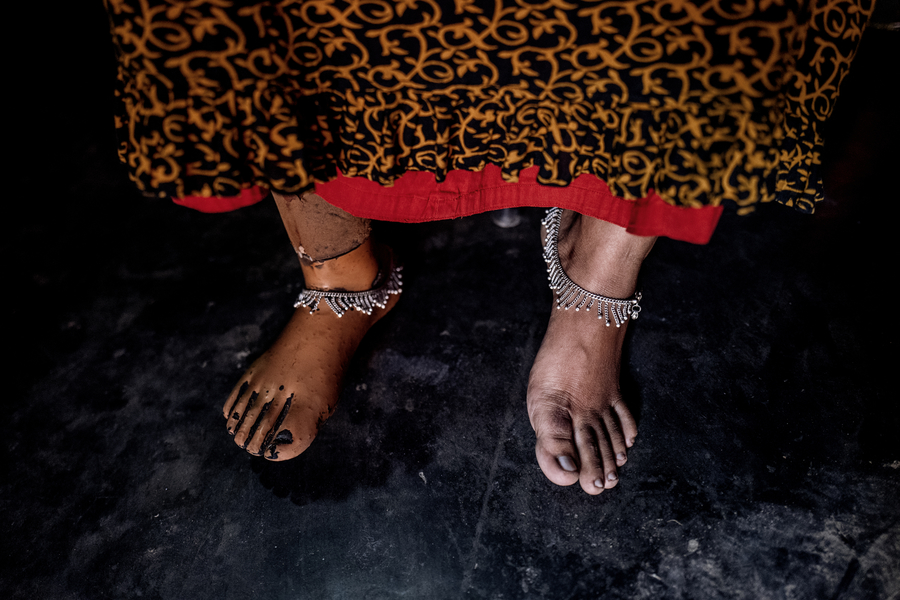 Arati Baladas has a prosthetic leg after her right leg was crushed in the Rana Plaza factory disaster.