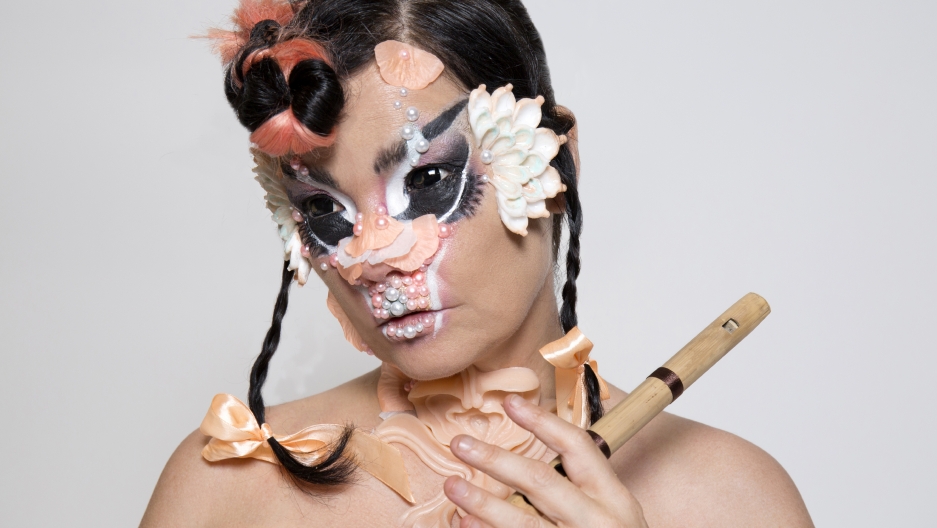 Björk’s most recent album "Utopia" is a beautiful arrangement of flutes, choral arrangements and subdued moments of brightness.

A-side B-side is a reoccurring segment on The World as part of a partnership with Smithsonian Folklife Festival. The series compares the sounds and ideas of two songs, albums or artists. On the A-side: a folk or traditional selection; on the B-side: a contemporary selection.

This week’s A-side B-side is a little bit more complicated.

If there isn't a word for the moments before you forget your nightmare or the pain of a heartbreak, there’s a sound.

That moment is captured on Björk’s latest album "Utopia" with "Blissing Me" and in The Icelandic Singers' “Lullaby.” Despite thematic differences, each song addresses time with worry, but with patience.

"Utopia" distinctly melds the sounds of a mythical world with familiar moments of reassurance, longing and instances of personal reflection. The second single from "Utopia," “Blissing Me,” brings together thoughtful lyrics with slow-paced instrumentals. “Blissing Me” lays the choral arrangement against harps, flutes, bird calls and textures that experiment with warm and metallic sounds. In effect, the production of this song is able to capture that in-between feeling after pain and before closure or relief. Together, the vocals and instruments create an elongated sense of time that reflects intimacy, suspense, hopefulness, doubt and honesty with oneself and others.

In the same way, The Icelandic Singers’ “Lullaby” takes on a similar task through the choral arrangement's pacing and balance. Of course, this song aims to put a child to sleep, but the lyrics also reflect moments of intimacy, suspense and worry. The choral singers have instances of strength and balance in voice, but occasionally linger on certain notes and warming harmonies.

In many ways, these two songs sonically work through several stages of coping. They manage to capture an idea of lingering between discernible feelings and eventually drift one into a moment of relief.