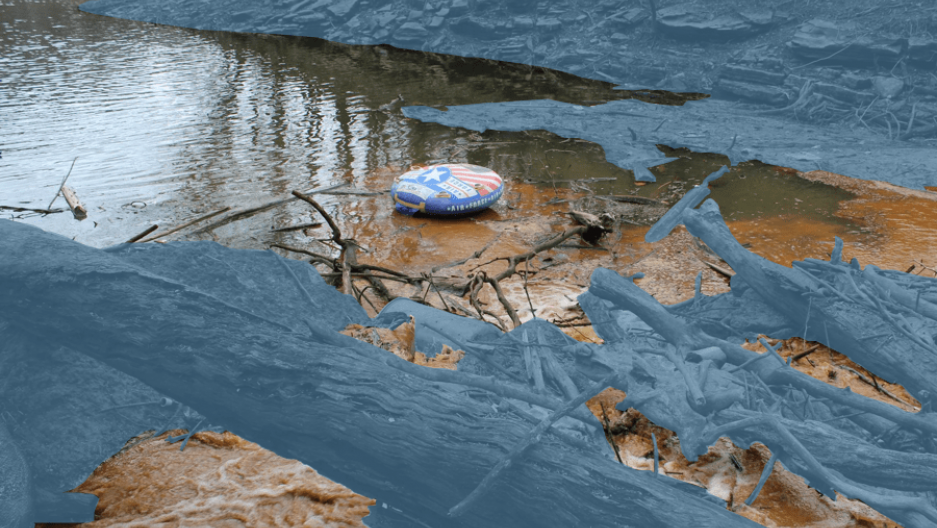 Coal ash pollution from a pond at the Brown Power Station seeps into Herrington Lake.

Courtesy of the Kentucky Department for Environmental Protection

As a pending federal lawsuit over coal ash pollution in a Central Kentucky lake plods along, new details have emerged about the extent of contamination in the water.

In an affidavit filed last month in federal court, biologist Dennis Lemly laid out the results of fish sampling in Herrington Lake, a major fishing and boating site near Danville. Previous sampling by state regulators found high levels of the chemical selenium in fish tissue, but Lemly found evidence of additional damage to the lake’s fish and suggests the issue is far worse than the state’s assessment.

Selenium is a naturally occurring element that can be toxic to wildlife in large amounts. Once it gets into a body of water it’s very difficult to eradicate. While it exists in nature, it’s also found in coal ash — the byproduct of burning coal for electricity.

And there are more than six years’ worth of documents showing contaminated water including arsenic and selenium leached from the ash pond at the E.W. Brown Power Station into groundwater and directly into Herrington Lake.

About 12 percent of the 548 fish Lemly tested showed serious physical deformities — everything from craniofacial deformities to skeletal problems.

“If you look at the background deformity rate, you might find 1 out of 200 fish that has a minor fin deformity,” he said. “In comparison, in Herrington Lake, over 1 out of 10 had deformities that were manifested in these major skeletal deformities.”

And a spokeswoman for Kentucky Utilities, which operates the Brown plant, said the utility is not certain the large amounts of selenium that regulators have found in Herrington Lake are related to the Brown plant’s coal ash.

Environmental nonprofit Kentucky Waterways Alliance, working with Earthjustice, filed the federal lawsuit in July after a WFPL story detailed extensive pollution from the coal ash landfill at the Brown Power Station, which sits right on the edge of the lake. For at least six years, contaminated water left the site and ran off into the lake. Despite remedial measures, the problem continued, according to state records.

In January, the Kentucky Department for Environmental Protection formally cited Kentucky Utilities, fining the company $25,000 in civil penalties and requiring it to complete a corrective action plan.

That corrective action plan has yet to be finalized. The state received more than 400 comments — most from Sierra Club members — during the public comment period. All opposed the plan.

In the plan, Kentucky Utilities is proposing a study of all the potential sources of selenium that could have affected Herrington Lake, as well as a full fish analysis. This could take until 2018 or 2019 — a delay many found unacceptable.

Kentucky Department for Environmental Protection spokesman John Mura said the state has yet to approve the corrective action plan, and he’s not sure on the timeframe. In the meantime, Kentucky Utilities has been given the go-ahead to begin their own tests of the fish in Herrington Lake.

“We are waiting on the results of further testing that is being done out there before we proceed,” Mura said.

Kentucky Utilities has requested a judge dismiss the lawsuit filed by Earthjustice, saying the issue is adequately addressed by the corrective action plan pending state approval.

Earthjustice attorney Thom Cmar is opposing KU’s motion to dismiss the lawsuit. The lawsuit and the corrective action plan are operating on separate tracks, and he said if the plan was beefed up a bit, it might address some of his concerns.

“If we could resolve this outside of a lawsuit, that would be better,” Cmar said. “But the only way that I can see that happening would be if the company was willing to take responsibility for its contributions to the very serious contamination we’ve seen in the lake and offer to take much more meaningful steps both to stop further pollution and clean up the pollution that’s already out there.”

Chris Whelan, a spokeswoman for KU, said the company has begun its own fish sampling. She said other reports, like those issued by the Kentucky Division of Fish and Wildlife, contradict biologist Dennis Lemly’s findings.

“What we’re seeing from all the other reports is there’s no issue with the fish,” she said. “[The Division of Fish and Wildlife’s] annual performance report from 2016 says the fish are fine, and their 2017 fishing forecast says the fish are rated fair to excellent.”

Lemly said that makes sense — his study focused on small, young fish, while Fish and Wildlife looks at larger and older fish that anglers would target. He said the prevalence of skeletal deformities among the fish he sampled suggests the pollution has been an issue for a while — long enough to cause what are essentially birth defects.

“That gets back to the mechanism by which selenium poisons fish,” Lemly said. “It doesn’t poison the little fish after they hatch out of their eggs. It occurs because the adult fish consume high selenium in their diet. In other words, the selenium gets into the food chain.”

In the meantime, Lemly said selenium is nearly impossible to remove from a water body as large as Herrington Lake.

“Herrington Lake is contaminated,” he said. “And no matter if E.W. Brown stopped their discharge today, the selenium that is in that lake is going to continue to cause problems and accumulate in those fish and potentially poison them for a long, long time.”

The case in US District Court is currently awaiting a ruling from Judge Danny Reeves on Kentucky Utilities’ motion to dismiss.

This story and interview were featured on Science Friday’s series The State of Science, which showcases science stories from public radio stations across the United States. A version of this story was originally published by WFPL in Louisville.