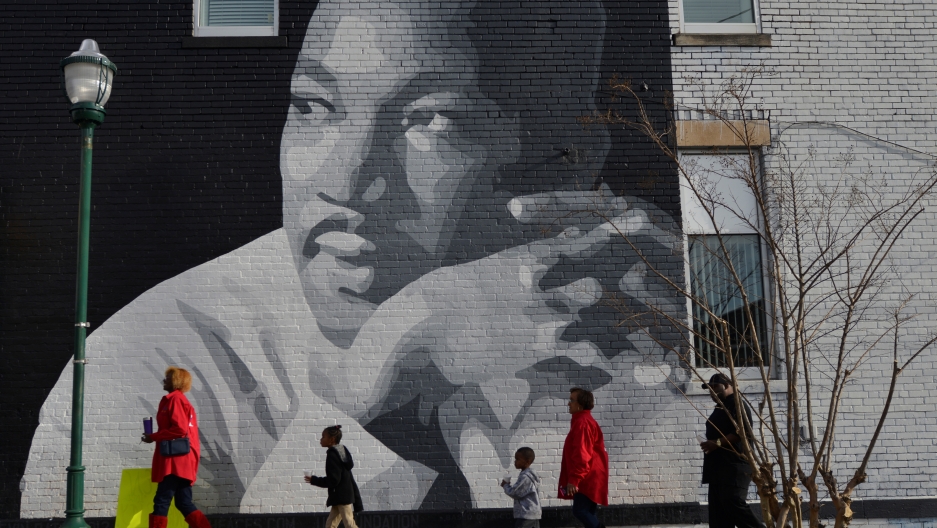 People gather to march in the annual parade down MLK Boulevard to honor Martin Luther King, in Chattanooga, Tennessee.

On Aug. 31, 1967, Dr. Martin Luther King Jr. delivered a speech entitled “The Three Evils of Society” at the National Conference of New Politics.

Since it’s not the “I Have A Dream” speech, most of my fellow citizens are unacquainted with the text of this particular address, delivered just eight months before his assassination in Memphis, April 4, 1968. And, even if we were familiar with it, it’s not exactly the kind of speech that the corporate media would be quoting with enthusiasm.

Consider what King had to say that day:

He went on to boldly declare that, “The evils of capitalism are as real as the evils of militarism and racism. The problems of racial injustice and economic injustice cannot be solved without a radical redistribution of political and economic power.”

See what I mean? Who really wants to wrestle with that? Anyone? Anyone?

A radical redistribution of political and economic power.

By the time King gave this speech, he was no longer on the list of most admired Americans. The radical King was now being ridiculed by fervent foes and former friends. The truth he was telling was too hot to handle.

At the time of his death, King was expanding his movement to include the economically exploited of all races and creeds, both here at home and abroad. King was advancing a number of ideas on his economic agenda for America, including a Bill of Rights for the Disadvantaged and a Guaranteed National Income.

I have thought about King’s ideas over the past few days, watching the president, the Senate majority leader and others jubilantly celebrate the passage of a massive tax cut that is certain to exploit “both black and white.” And then some.

They seem determined to undo the programs and progress of the New Deal and the Great Society by any means necessary, even if it exponentially explodes both the deficit (by $1 trillion over the next 10 years) and the national debt (I can’t count that high).

Up next on the agenda: Social Security, Medicare, Welfare.

The social safety net is getting rolled up. Whether you voted for or against President Donald Trump, if you’re poor, you’re about to suffer even more. Off in the distance, I can hear the rich and the lucky singing, “Happy days are here again!”

Even as a bullet with his name on it chased him all around America in his final year, King kept reminding us that the inseparable twin of racial injustice is economic injustice.

“Many white Americans of goodwill have never connected bigotry with economic exploitation. They have deplored prejudice but tolerated or ignored economic injustice. But these two evils have a malignant kinship.”

As they bear witness to the increasing racial unrest in our nation, and some even denounce white supremacy, our national leaders in Washington still haven’t made the connection, the “malignant kinship” between poverty and race.

The more people we push into poverty, the more racial unrest we will see in the streets. If you think the poor whites who voted for Trump were mad as hell then, wait until they realize that they’ve been hoodwinked, bamboozled, run amok and led astray.

What happens when reality bites? Once again, they’ll be looking for someone to blame.

Maybe they’ll fire Trump, although he now says he’s “unbeatable” in 2020 after the tax bill. Maybe they’ll drain the congressional swamp, although thanks to gerrymandering, most members are in safe seats, and the Republicans from red states who are in harm's way are facing challenges from their political right, so not sure how that helps us. What’s most frightening is that the anger could give way to more nativism, which in turn leads to more tribalism, which in turn leads to more civil unrest.

Of this I am certain: This is not the way to "make America great again."

Somehow, as King implored 50 years ago, we must awaken the sleeping conscience of America.

Smiley is the creator of the national stage production "Death of A King: A Live Theatrical Experience," premiering Jan. 15, 2018.