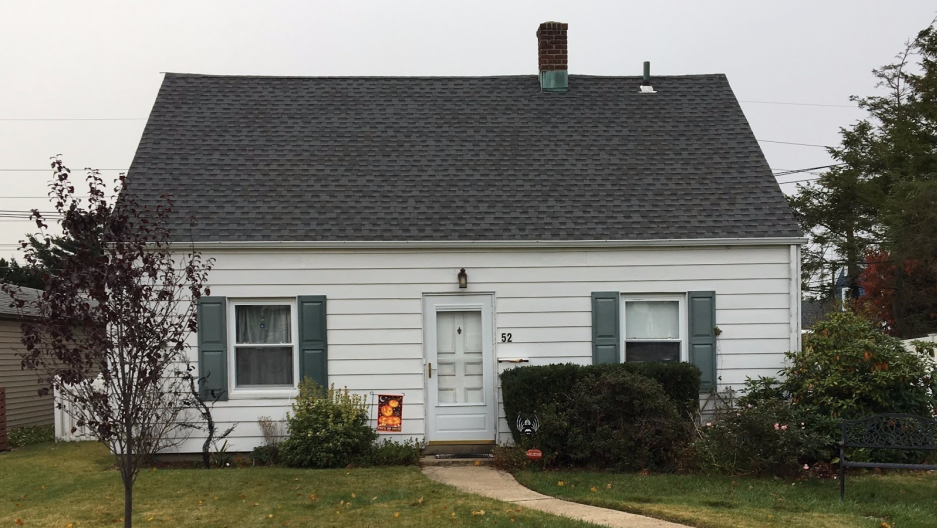 This is one of the 17,400 houses Bill Levitt constructed after World War II as part of his new community, Levittown.

It’s a colorful fall day as Louise Cassano takes me on a walking tour of Levittown, New York. Trees with burnt-orange leaves line Elbow Lane, and I wonder aloud if the neighborhood has always been so heavily wooded.

“No, no. These trees were sticks. I’m not exaggerating,” Cassano says, recalling what the 20-foot-tall trees looked like when she first came to Levittown in 1951. She flattens her palm, even with the ground, near her waist. “They were this high.”

For the last 66 years, Cassano has watched Levittown grow. Like many other families, the Cassanos moved out of New York City after World War II to take advantage of a then-new suburban community, Levittown. It opened to the public in 1947 and represents one of the earliest versions of the modern suburbs.

Cassano and more than 51,000 other current residents can thank Bill Levitt for this place. While many saw Long Island’s potato fields solely as farmland, Levitt realized they could be transformed into a suburb, a bedroom community for New York City.

Lawrence Levy, the executive dean of Hofstra University’s National Center for Suburban Studies, says Levitt was also savvy enough to foresee that the demand would easily meet the supply of houses he wanted to build. Veterans returning from World War II wanted to settle down and buy a house, and thanks to the federal government, they had the means to do so.

“He knew if he could produce homes that had eye appeal and utility, they would sell,” Levy said. “The demand among GIs was enormous and it was fed by the GI Bill, which made cheap loans and subsidized rentals available at a scale we had never seen before.”

Levitt was able to build and sell more than 17,000 homes for incoming residents. Bob Koenig, a local historian and curator at the Levittown historical museum, says Levitt took a page out of Henry Ford’s book to mass produce these houses quickly and efficiently.

“Levitt had an assembly line-like process of 27 different steps,” Koenig says. “Each crew would have a particular job to do. The copper tubing would get put down, and then a concrete pourer would come in to pour concrete over the slab. Then a plumber would come along and so on and so forth. Ford brought the cars to his workers. Levitt had to bring his workers to the homes.”

When Levittown was complete, Bill Levitt had created what many considered the new American dream. This setup allowed people to escape the cramped conditions of the city and experience the novelty of suburban homeownership.

“We would camp out in the backyard and the doors were never locked,” Cassano said. “There was a feeling of freedom and camaraderie. It was exciting because we were all learning it at the same time and you were growing up with others who were doing the same thing.”

Locked out of the American dream

As Cassano drives around Levittown today, she points out town landmarks and places and important places from her childhood. At one point, we slow down near one unremarkable-looking home.

“That’s where the first Asian family moved in,” Cassano said.

For many years, Levittown was a whites-only community, so when a family of a different ethnicity moved in, it didn’t go unnoticed.

“Eventually we started to see other cultures move into the community,” Cassano said. “At first, they were so noticeable because they were so rare. And those changes pleased some people and didn’t please others.”

The lack of diversity began before Cassano’s time, having been built into the framework of the community. For decades, the Federal Housing Administration subsidized developers on the condition they didn’t sell homes to black Americans. Bill Levitt played ball.

But he insisted that Levittown’s ban on black Americans wasn’t due to racism. He saw it as a business decision. He argued, “If we sell one house to a Negro family, then 90 to 95 percent of our white customers will not buy into the community. That is their attitude, not ours. We did not create it and we cannot cure it."

“At a minimum, you can say Bill Levitt didn’t have the courage of what he claimed his convictions were, to take a financial and economic risk in trying something different,” Levy says. “Is he right? Would 95 percent of people stop buying? Possibly. But not everybody would have. If you don’t cause panic and fear among homeowners ... maybe it wouldn’t have turned out the way he feared it might.”

And after 70 years, Levittown hasn’t gotten much more diverse. According to the 2010 US Census, Levittown is still nearly 90 percent white. Today, Levy says, that has less to do with financial or governmental barriers.

“There are plenty of black families who can afford to move into Levittown. … There are ghosts in that community, to them,” Levy says. “Ghosts of racism and exclusion and dashed dreams. Imagine you’re a black soldier for as many years and as many times as a white soldier, and you can't get to live or even buy in most places in these new suburbs.”

So even though Long Island as a whole is getting more diverse, Levy says it’s also staying noticeably segregated, partly because people of color simply don’t feel welcome in certain communities.