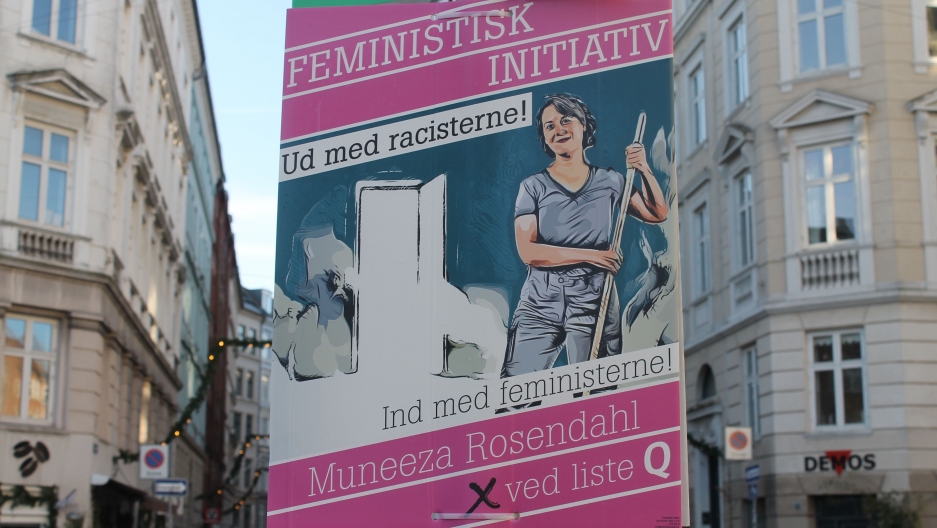 In an illustrated campaign poster hanging in Sankt Hans Torv in Copenhagen, Muneeza Rosendahl stands like a cartoon superhero brandishing a broom midswing, sweeping dust toward an open door.

The dust, in this case, is racism and the patriarchy. “Ud med racisterne! Ind med feministerne!” her campaign poster reads.

Translation: “Out with the racists! In with the feminists!”

It’s a bold slogan. But Rosendahl, 37, is pushing a bit of a bold agenda for Denmark.

She’s one of the leaders of the Feministisk Initiativ (F!), a new intersectional feminist party in Denmark that ran in Copenhagen’s municipal elections for the first time last month. The party is young — it officially launched in June and got on the ballot in September — but ambitious when it comes to gender and equality. F!’s platform includes equal maternity and paternity leave, gender quotas in political committees and zero employment discrimination through anonymized job applications.

While Denmark is viewed as progressive internationally, the country has stagnated on gender equality over the last decades and a strong anti-immigration movement has dominated the political agenda in recent years. Activists say a stronger voice for equal rights is needed as Denmark is in danger of losing its progressive reputation at the expense of women and minorities in the country.

“The day we said, 'Oh, we have equality,' we stopped caring about it and equality went down the drain,” Rosendahl said.

On a red and blue party spectrum, F! is a neutral “pink” that focuses on a scale of human rights, Rosendahl explained. Their platform is inspired by intersectional feminism — a term that refers to how oppression intersects with classism, racism and homophobia, creating varying levels of discrimination — and includes issues such as better conditions for the disabled community, and training on class and minority issues for educators.

It’s part of a larger movement in Scandinavia to shake up status-quo politics with feminism. F! is an offshoot of a party originally formed in Sweden in 2005, as well as in Finland and Norway in recent years. The parties share similar platforms, as well as the same branding — Rosendahl’s slogan was originally coined by Swedish candidate Soraya Post in 2014 and has seen success: Sweden’s feminist initiative has gained seats in the municipal councils as well as European Parliament, and the government has adopted a “feminist foreign policy.”

There is evidence Denmark’s F! is also gaining support. The party garnered approximately 2,060 votes in the Copenhagen city elections and 3,528 votes in the regional elections on Nov. 21. While not enough support to get in the municipal councils, it was sufficient for the party to begin gathering voter declarations for the parliamentary elections in 2019. Rosendahl said she was encouraged, given their unconventional platform and the fact that the party has only been publicly known for 2 1/2 months.

“When you look at it in that sense, then we are really, really satisfied that several thousand people cast their vote for us,” she said. “We look at it as confirmation that the public really wants a feminist party.”

The country has fallen behind its Nordic neighbors when it comes to gender equality in recent years. While Finland, Norway, Sweden and Iceland all remained within the top five on the World Economic Forum’s annual Global Gender Gap Report, Denmark ranks 14th worldwide (actually up five rankings from 19th last year).

Denmark has a gender pay gap of 15.1 percent. Fifty-two percent of women in a 2014 EU survey said they’d been subject to physical or sexual violence, and in mid-November, GREVIO (Group of Experts on Action against Violence against Women and Domestic Violence) called out Denmark for not providing adequate protection for victims of domestic violence. The disparity is also seen in politics. Women hold just 33 percent of municipal council seats, roughly the same proportion as the early 1990s.

This stagnation in gender equality is what many find concerning.

“We have actually been a little successful too early,” said Ulrik Kjær, professor of political science at the University of Southern Denmark. “At some point, people simply started to think, ‘Well, check! We have accomplished a lot, we have kind of solved the problems on the feminist agenda and now let’s move onto other things.’”

At the same time, the rise of the conservative Danish People’s Party — Dansk Folkeparti or DF, in Danish — over the last two decades, has focused much of Denmark’s political discussions around an anti-immigration and refugee debate, said Drude Dahlerup, a professor of political science at Stockholm University.

“In this atmosphere, it was very difficult to work on gender equality policy, not to speak of feminism,” she said. “Gender equality and feminism is about the equal worth of all human beings. Whereas this anti-immigration debate is really about them, and we, and lack of equal worth.”

That’s one of the reasons why F! believes a focus on intersectional feminism — setting up in opposition to the increasing xenophobic discourse in the country — could be the path forward for feminism in Danish politics.

The day before the election, Rosendahl and Ida Damgaard, another F! candidate, canvassed Copenhagen’s Nørrebro neighborhood with a group of women’s rights activists from the Middle East and North Africa. Speaking in a mixture of Arabic, French, English and Danish, they discussed issues such as the freedom to wear the niqab, improving social services and increasing Denmark’s acceptance of refugees with Lebanese, Moroccan and Palestinian shopkeepers. After speaking with the group, one grocery store owner said that he would vote for the first time since immigrating to Denmark 14 years ago.

However, the road ahead will not be easy, Kjær said. It’s difficult for new parties to break into the already established multiparty system in Denmark, as major parties tend to absorb single issues into their platforms (already earlier this year, one of Denmark’s leading parties, the Social Democrats, created the Helga Network to encourage more female participation in politics).

But Denmark’s F! party believes if they can push this conversation at home, it could mean change for women worldwide.

“We should always strive to improve things,” said Damgaard. “And hopefully, it will spread so others will have their conditions improved, as well.”