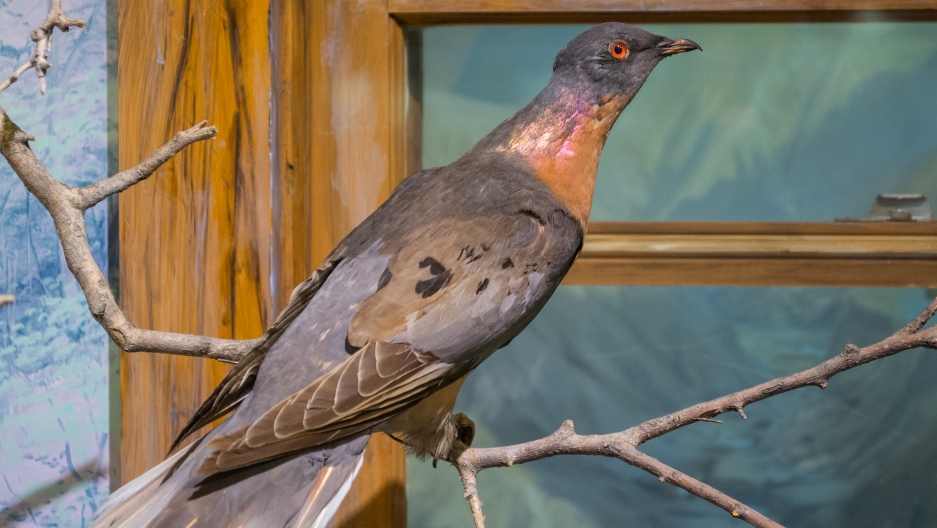 A male passenger pigeon is on display at the Cleveland Museum of Natural History. The world’s last known passenger pigeon, a female named Martha, died in 1914 at the Cincinnati Zoo.

The last passenger pigeon died more than 100 years ago, but scientists still puzzle over how a bird once numbering as many as 5 billion disappeared so quickly from North American skies. “Hunters with guns,” is the big answer — but why didn’t small populations of pigeons survive anywhere?

New research into passenger pigeon genetics may provide some clues. Among other findings, the study, published recently in Science, suggests the birds’ adaptation to living in large groups may have left them ill-equipped to quickly thrive in smaller numbers.

As co-author Beth Shapiro explains, the research — which involved studying a number of complete and mitochondrial passenger pigeon genomes, as well as genomes from a close relative, the band-tailed pigeon — overturns a previous theory about why passenger pigeons went extinct so quickly.

“A few years ago, a study was published that suggested that their populations actually fluctuated quite considerably over time and that this might have meant that they were already on a decline when humans turned up and started shooting them,” says Shapiro, an associate professor of ecology and evolutionary biology at the University of California, Santa Cruz. “And we found that this is, in fact, not true — that their populations had been extremely large and stable for at least the last several tens of thousands of years, even during the last ice age.”

Pigeons in these large, stable populations were well-adapted to life in big groups, Shapiro says. Individual pigeons likely didn’t have to work hard to find a mate, or worry as much about predation or finding food. But over the course of just several decades, she explains, our “industrial-scale murder” sharply reduced passenger pigeon numbers — and in smaller groups, the average passenger pigeon suddenly faced a host of new survival worries.

“If that ability had been lost over the course of tens of thousands of years of living in large populations, it would have been tough for them to survive as a tiny population,” she says.

For Shapiro, the passenger pigeon’s story is a cautionary tale — and a chance to learn from our misconceptions.

“We often think of things that are in large populations as being not particularly vulnerable to extinction, but perhaps that's not true,” she says. “And perhaps when we're thinking about whether a species is in danger of becoming extinct, we really need to think more holistically, start to consider the entire history of adaptation of that species.”

One similar population type could be fisheries, Shapiro says. “We know that fisheries have been very large, they tend to be large populations that are connected to each other,” she explains.